Space Science in the Age of Starship

The 2022-08-11 issue of Science has a “front of book” article, “Prime Mover: Are space scientists ready for Starship—the biggest rocket ever?”.

When SpaceX CEO Elon Musk talks up Starship, it’s mostly about human exploration: Set up bases on Mars and make humans a multiplanetary species! Save civilization from extinction! But [planetary scientist Jennifer] Heldmann and many others believe the heavy lifter could also radically change the way space scientists work. They could fly bigger and heavier instruments more often—and much more cheaply, if SpaceX’s projections of cargo launch costs as low as $10 per kilogram are to be believed. On Mars, they could deploy rovers not as one-offs, but in herds. Space telescopes could grow, and fleets of satellites in low-Earth orbit could become commonplace. Astronomy, planetary science, and Earth observation could all boldly go, better than they ever have before. 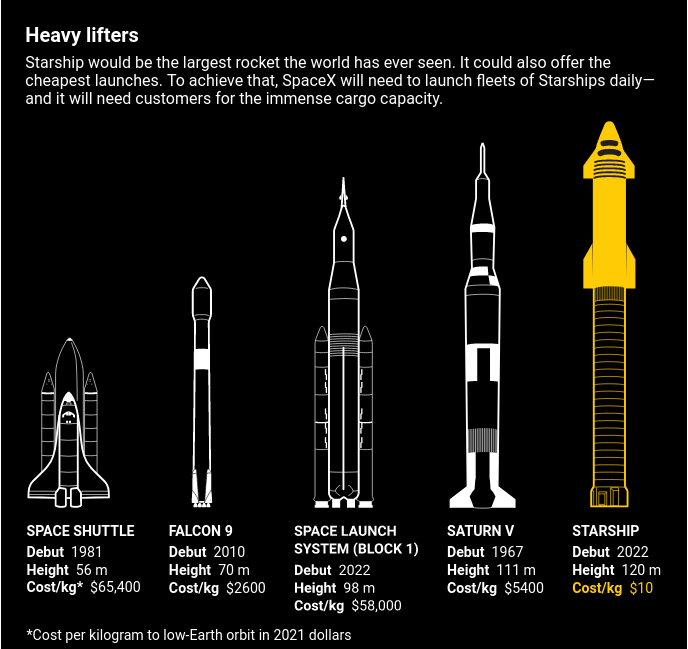 Some astronomers also have Starship in their eyes. “There’s no way to talk about it without resorting to cliches, but ‘best rocket engine ever,’ probably, by most metrics,” says David Rubin, a cosmologist at the University of Hawaii, Manoa. He wonders how much simpler the $10 billion James Webb Space Telescope (JWST) might have been if its 6.5-meter-wide segmented mirror hadn’t had to fold up to fit on its rocket. Engineers could have built a monolithic mirror and launched it as is within the 9-meter-wide Starship fairing, which encloses a volume about half as big as a hot air balloon.

Rubin also dreams of using Starship to construct a giant telescope—say 30 meters—in space. Limbed robots could precisely lay down mirror segments on a scaffolding, forming a giant mirror that could pick out the universe’s first galaxies and look for signs of life in the atmospheres of Earth-like exoplanets. “The science gains scale really quickly as you build larger and larger telescopes,” Rubin says.

⋮
[Former JPL software engineer Casey] Handmer, who now works as a clean-energy entrepreneur, wants astronomers and planetary scientists to adopt this sort of bold thinking. Instead of a 30-meter telescope, why not a 1000-meter one? Why not mass-produce probes that could survey dozens of asteroids? Why not fly by all the outer planets in the next decade? Or land on most planets annually?

In Handmer’s view, the problem is partly cultural: NASA engineers try to get everything right on the first try, at all costs—the vastly expensive, long-delayed JWST being a prime example. “It’s kind of like a medieval cathedral,” he says, of such flagship missions. To exploit Starship’s immense capacity, Handmer estimates NASA will need to make 100 times as much stuff for a fraction of the usual cost. It will need to be a fast-fashion factory, not a boutique. But having worked at JPL, Handmer isn’t necessarily hopeful that will happen. “It was just not set up to mass-produce anything,” he says.

In the Fall 2021 issue of The New Atlantis, Rand Simberg published an article, “Walmart, But for Space”, which discusses the larger issues of how dramatically reducing the price of access to space changes everything about how we do things in space.