SpaceX plans to launch 34 Starlink satellites into Shell 4, with an eventual 540 km circular service orbit at 53.22° inclination, on 2022-09-11 at 01:10 UTC, which is in the evening of the 10th in western hemisphere time zones. The launch will also carry the BlueWalker 3 prototype communication satellite intended to test direct space to mobile phone communication for the planned AST SpaceMobile constellation. This will be the fourteenth flight of Falcon 9 booster B1058, making it the fleet leader for most flights, with a turn-around time of 65 days since its last flight. The launch will be from Launch Complex 39A in Florida. Weather is currently forecast as 60% favourable for launch.

Here is a pre-flight preview from Everyday Astronaut, which disagrees with SpaceX’s announcement on which first stage booster is being used. I’m going with SpaceX. 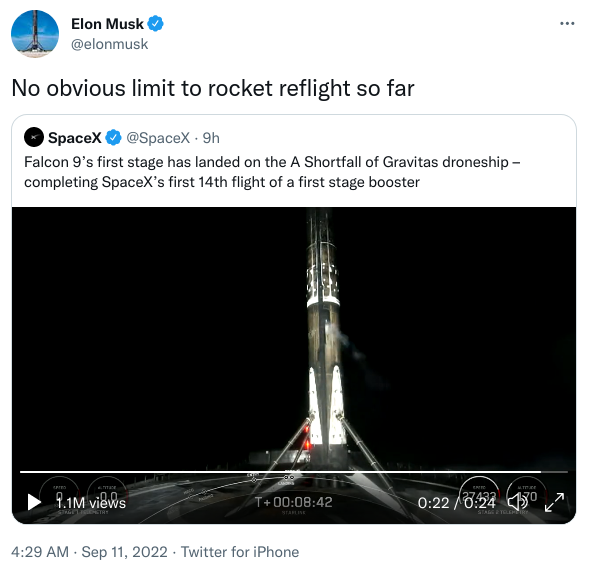 In addition, this successful flight was the first in which the Falcon 9 second stage performed five separate burns:

Even though the Starlink satellites’ operational orbit is 540 km, they are deployed in a lower orbit so that any satellites whose control or propulsion systems malfunction will re-enter and burn up in a relatively short time. The working Starlinks raise their orbits using their on-board ion propulsion thruster.