SpaceX plans to launch 53 Starlink satellites into Shell 4, with an eventual 540 km circular service orbit at 53.22° inclination, on 2022-10-03 at 23:56 UTC. The launch will be from Space Launch Complex 4 East at Vandenberg Space Force Base in California. The first stage booster, B1071, will be making its fifth flight, after a turnaround time of 73 days since its last mission.

It’s unusual for SpaceX to launch Starlink satellites into 53.22° Shell 4 from Vandenberg, but they’ve done it before. The reason for this may be that with the NASA Crew-5 launch scheduled for 2022-10-05 from Launch Complex 39A and the Galaxy 33 and 34 satellites launching from Launch Complex 40 on 2022-10-07 (October 6 local time), the Florida facilities and staff could not fit this one in.

Today’s launch attempt was cancelled, per the following tweets. If Crew-5 stays on schedule, they will further delay this mission until after the crew launch on 2022-10-05.

The launch has now been rescheduled for 2022-10-05 at 23:10 UTC. The player in the original post will work for this launch attempt.

Launch, first stage landing, and orbital insertion were successful. I have cued the replay in the original post to start one minute before liftoff.

Elon Musk has posted this picture taken from a Starlink satellite (which apparently has a camera—who knew?) of other Starlinks in its flock and the Falcon 9 second stage that launched it performing the disposal burn to de-orbit and burn up in the atmosphere. 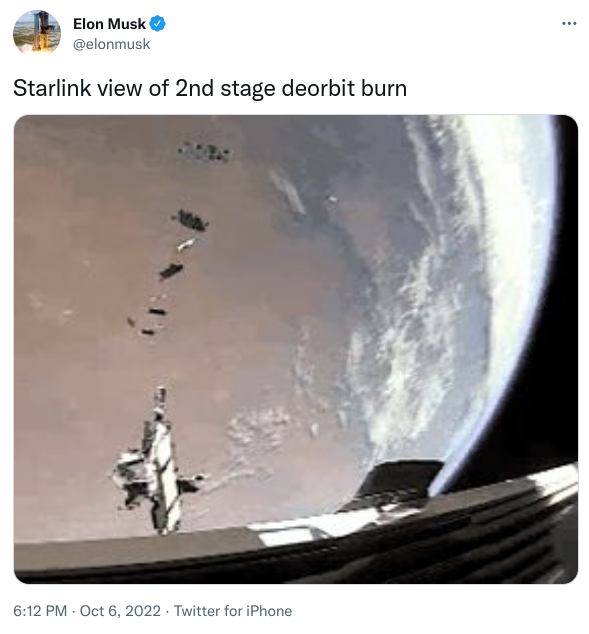 which apparently has a camera—who knew?

Here is a video clip from Scott Manley’s 2022-10-08 Deep Space Update which shows the Falcon 9 upper stage deorbit burn from comment #5. In the video you can see the stage ignite and quickly exit, stage right, on its way to burning up in the atmosphere.