On 2022-11-29 SpaceX conducted a 13 second static fire of 11 Raptor 2 engines on Super Heavy booster 7. This test was done with a full liquid oxygen (LOX) load (but just a bit of methane) to test autogenous pressurisation of the LOX tank in the liftoff configuration. The engines appeared to start in two groups, and there was a fine “Raptor honk” when they shut down.

I didn’t see any evidence of the “flying concrete storm” that has accompanied earlier long static firings. Perhaps they have finally found a solution to that problem. 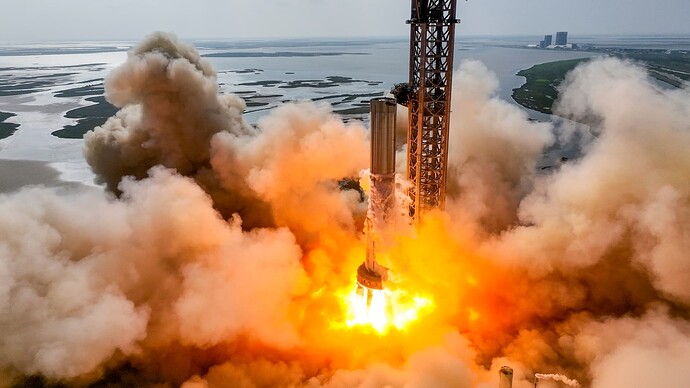 Did they say anything about how much concrete was ablated/eroded? Seems to me a lot of the “dust” that gets kicked up may be concrete – just in a more desirable form of than shrapnel. If so, it is still an operational issue of major importance.

Kinda makes me wonder if contracting with an oil company for a gulf platform might work out better in the long term. Of course, oil platforms don’t need to deal with super-corrosive superheated (even ionized) salt water blasting their support columns, so adapting the technology may be infeasible.

Did they say anything about how much concrete was ablated/eroded?

I don’t recall any statement about the volume or mass of concrete that was ejected, but in some previous static firing videos you can see big chunks flying through the air amidst the dust (whatever it is). They have stated that they are trying various kinds of refractory concrete, and work on the water deluge system on the orbital launch mount is supposed to create a more benign environment immediately after launch. A number of old-time rocket hands have questioned the feasibility of launching a rocket as big as Super Heavy without a flame deflector like that used by the Saturn V.

Kinda makes me wonder if contracting with an oil company for a gulf platform might work out better in the long term.

In July 2020, SpaceX bought, through a subsidiary, two former deepwater oil rigs (Ensco 8500 series semi-submersible) with the intention of converting them to Starship offshore platforms capable of launching and landing Starship. Since the acquisition, work has been done toward clearing the oil rig equipment from the platform but the project has largely gone silent. I believe that in one public appearance Elon Musk said that demonstrating orbital flight from Starbase took priority over developing the offshore platforms.