Testing vacuum-optimised rocket engines on the ground poses formidable problems. To work efficiently in a vacuum, a rocket’s exhaust nozzle should expand the combustion gases to nearly zero pressure lest thrust be lost due to lateral expansion of the exhaust plume. But if a nozzle designed for vacuum operation is fired at sea level, ambient air will infiltrate the nozzle, causing “flow separation”, which can lead to vibration of the nozzle that can tear the engine apart. Some extreme remedies for this have been used, including firing engines in a vacuum chamber with steam injection used to condense the exhaust and remove it from the chamber. SpaceX is taking a different approach: exploiting the very high combustion chamber pressure of the Raptor engine to maintain sufficient pressure in the vacuum nozzle to avoid destructive oscillations.

I had no idea that the rocket engines functioned differently in space and in atmosphere.

On another note.
One thing that always perplexed me is that a rocket engine can push in a vacuum. It seems there is nothing to push off of.

It seems there is nothing to push off of.

One thing that always perplexed me is that a rocket engine can push in a vacuum. It seems there is nothing to push off of.

Physicists will start talking about Newton’s third law, but as an engineer I find it much more intuitive to think in terms of force vectors. Imagine a hollow pipe with caps on both ends. Fill the pipe with gas under high pressure, with the caps still on. The pressure of the gas pushes outward on the walls of the pipe and the end caps, but since the pressure is even, the force on any point is canceled by the force on the opposite point diametrically or end to end so there is no net force.

Now remove one end cap. The pressurised gas continues to push on the walls of the tube and the remaining cap, but since the gas is now free to flow out the missing cap, it exerts no force on that end. Thus, the force on the closed cap is unbalanced and that force will cause the pipe to accelerate in the direction of the closed end. The acceleration will continue until all the gas is released and the pressures inside and outside the pipe are equal.

The only difference between this toy model and a rocket is that the rocket burns fuel inside the pipe to maintain a constant pressure so, as long as it continues to burn, it generates a constant force on the closed end. This is why rockets work, and it applies regardless of whether there is air or vacuum outside the open end. (Actually, a rocket is more efficient in vacuum because the pressure difference between the inside and outside will be greater.) All the rest is details.

If this explanation seems unclear, here’s another by Prof. Wernher von Woodpecker from Destination Moon. 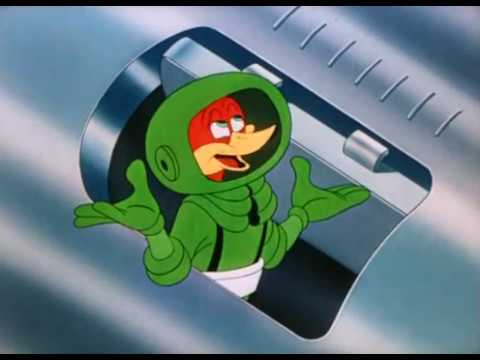 The sad thing is that video could not be made today – total absence of Political Correctness. Maybe it has been “downhill all the way” since the 1950s?