Stock Market Guru Stumped by “What do they do?” Question

One clue you’re near a stock market top “when even turkeys can fly” is people buying and recommending stocks without having any idea what the company does to make (or, often, lose) money. Here is Mark Minervini, self-described as “considered one of America’s most successful stock traders” and author of such books as Trade Like a Stock Market Wizard and Think & Trade Like a Champion, appearing on CNBC in October 2021, right around the NASDAQ bubble top. 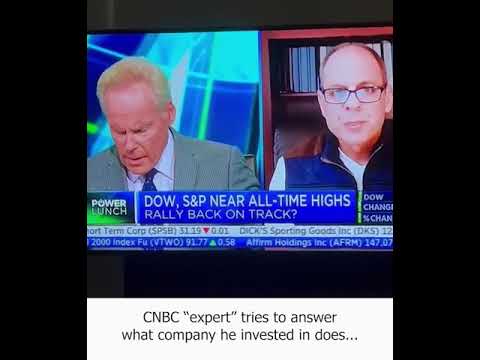 After describing his investment in Upstart Holdings, the host asks him “What do they do?”

“What does Upstart do?”

(Host, exasperated) “What kind of company is it?”

Well, one thing for sure: I’m breaking up listening to this!

At the time of the interview, Upstart (UPST) was trading at US$ 392.48 per share, near its all-time high of 401.49. The stock then began a precipitous decline into the seventies, losing 80% of its value, and today, after reporting earnings, dropped another 52%, currently trading at 36.82, down more than 90% from the high.

Upstart is an “AI lending platform that partners with banks and credit unions to provide consumer loans using non-traditional variables, such as education and employment, to predict creditworthiness.” Wikipedia continues:

Upstart developed an income and default prediction model to determine creditworthiness of a potential borrower. This means that in addition to traditional underwriting criteria—FICO score, credit report, and income—the Upstart underwriting considers education variables—colleges attended, area of study, GPA, and standardized test scores— and work history to develop a statistical model of the borrower’s financial capacity and personal propensity to repay.

Okay…and how good a deal are they providing for the customers who make it through the CAPTCHA they’ve erected to defend their “fintech” Web site from mindless bots? Well, let’s look at the fine print (which is also set in a medium-grey font).

Personal Loans: The full range of available rates varies by state. The average 5-year loan offered across all lenders using the Upstart platform will have an APR of 24.83% and 60 monthly payments of $26.36 per $1,000 borrowed. For example, the total cost of a $10,000 loan would be $15,817 including a $594 origination fee. APR is calculated based on 5-year rates offered in the last 1 month. There is no downpayment and no prepayment penalty. Your APR will be determined based on your credit, income, and certain other information provided in your loan application. Not all applicants will be approved.

Twenty-four point eight three percent annual percentage rate. US$ 15,817 to pay off a ten thousand buck loan. I remember when those were the kind of terms you got from the people who sent Moose and Rocco if you didn’t pay the vig on time.

So, that’s what they do (or, judging from the stock’s performance, did). Turkeys can fly, but not for very long or very far.