On March 19, 2021 the Swiss parliament adopted the “COVID-19 law”, which extended the emergency powers of the federal council (the seven-member executive branch of the Swiss federal government), authorised the test and trace surveillance, and introduced the COVID vaccination and test certificate. Quickly thereafter, sufficient signatures were collected to challenge the law in a referendum, which will be held on November 28, 2021. The committee opposing the law is now up and running, and today distributed their flyer to every household in my village with the post. You can see the contents of the flyer at their Web site, loicovid-non.ch in French, German, or Italian. 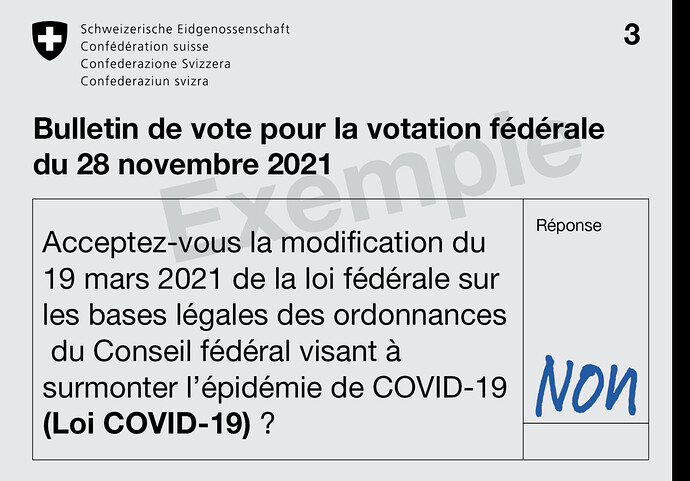 Any polls suggesting how it will turn out? I’m afraid, based upon some recent voting - like acquiescing to the EU’s coercion on Swiss firearm laws - traditional Swiss notions of individual liberty have been slipping.

The only poll I’ve seen, published by the Neuchâtel newspaper on 2021-10-15, indicated that the referendum was likely to fail (i.e., voters would opt to preserve the law) by around 63% to 35%. This is consistent with the last referendum on the law on June 18, 2021, in which it was approved by 60% of the electorate. A poll in November last year found 55% of those asked “were concerned about their individual freedoms being restricted by government measures” and popular opposition to vaccine passports and restrictions on businesses has risen since then, but it is apparently not enough to move the needle. Of course, there’s also the question as to whether one can believe or trust the polls.

Those who oppose the law are vehement, however. Launching a referendum against an act of parliament requires collecting 50,000 signatures within 100 days. The referendum committee against the COVID law broke all records when it deposited 187,433 signatures within four weeks.

One of the interesting questions in a democracy such as Switzerland is how to recognize those who (for whatever reason) chose not to vote. To prevent minority rule, it would be good to treat non-voters as votes against the imposition of any new law. Thus, getting approval of the Covid (really, Lock Down) law would require 50%+1 affirmative votes of the total number of registered voters.

An example of democratic minority rule might be the UK’s Brexit vote. Despite all the chest-thumping by the victors, Brexit gained only about 37% affirmative votes from the electorate. A significant number of citizens did not vote – many apparently because they considered the choice of rule from Brussels or rule from London to be Hobson’s choice. It would be good for societal stability to have genuine majority support for major changes.

Of course, none of this applies in an undemocratic country like the US, where elections are decided by foreign vote-counting machines. And – shockingly! – the votes usually support a particular Party.

This is especially relevant in Switzerland, where turnout in lightly contested referendums is often less than 40%, If the default required a majority of the electorate to approve the referendum, it is unlikely any referendum except the most controversial would pass.

Part of the problem is that the authorities get to decide the wording of the ballot measure. Note that in this case, “Yes” means that the law enacted stands while “No” repeals it. In a majority of electorate system, they could choose the wording to favour the result they preferred.

In Switzerland, most referendums are accepted or defeated by substantial majorities of the voters: a typical result is 60+% one side, 40-% on the other. This means that even with low participation, there are usually few recriminations by the losing side. This has the salutary effect that even in close ones (as I recall, the vote to cancel the purchase of the Viggen fighter aircraft, which undid the Army’s defence strategy, was decided by less than 2%, but when the votes came in, that was that, at least until they decided to try again with the F-35 [which will come to a vote probably within the next two years]).

Part of the problem is that the authorities get to decide the wording of the ballot measure.

Indeed! As we look around ourselves, it is impossible to avoid the conclusion that “democracy” has failed. It is worth thinking now about how we might restructure democracy in the aftermath of the coming inevitable collapse.

Basically, it is far too easy for politicians to pass a law. And even easier for them to pass a law which hands control to unaccountable bureaucrats. What’s to be done?, as Lenin was wont to say when surveying the failure of Marx’s predictions. Some ideas:

Net effect of this restructured democracy would be that we would have a lot fewer laws – and those laws would have much broader support from the citizenry.

According to preliminary results posted on the official Swiss Confederation Web site, the COVID-19 law that grants emergency powers to the federal government was approved by a vote of 61.9% yes and 38.1% no, with only 1 1/2 cantons (both in the mountainous “Old Switzerland” region) voting no. This represents failure of the referendum to abolish the COVID emergency powers.

Guessing that “%Particip” represents the share of registered voters who cast votes on this referendum, it seems that there was a high degree of public involvement – up to 75% of voters. 2.2 Million Swiss voters demanding that governments interfer heavily their lives, and only 1.4 Million wishing to be left alone. Not quite the image of rugged independence that many of us have of the Swiss people.

Another nail-in-the-coffin sure evidence of the death of Western individualism. At least counting the votes for “please continue to enslave me” in Switzerland is probably accurate.

How much did the hype over the omicron variant help?

Probably not much. The national popular vote was within one percentage point and below the results of a poll published in mid-October. Just four days before the vote, the Federal Council announced “Coronavirus : le Conseil fédéral renonce à un durcissement des mesures de lutte contre le COVID au plan national” (not available in English) that it rejected any nationwide tightening of COVID-related restrictions, but noted that cantons and municipalities were, of course, free to set rules based upon their local situation. Then, two days before the vote, they imposed new quarantine rules on a list of countries, mostly in Africa, but also Israel, the UK, and Australia, with “variants of concern”.

I doubt either of these affected the outcome very much.