Switzerland Sanctions Russia: Consequences for Neutrality and Safety as an Asset Haven

Egon von Greyerz, Managing Partner, and Matthew Piepenburg, Commercial Director of Matterhorn Asset Management, a Swiss company specialising in storage of physical precious metals outside the banking system for institutional and high net worth individual clients, discuss the implications of Switzerland’s joining the European Union’s sanctions against Russia and Russian banks, companies, and individuals in reaction to Russia’s invasion of Ukraine for Switzerland’s centuries-long tradition of neutrality and the safety of assets stored in Switzerland.

While they conclude that (in my paraphrase), Switzerland is still the best horse in the glue factory when it comes to protecting one’s assets from predatory governments, the events of past few days might lead to an increasing number of people with assets to protect re-evaluating (and, eventually, re-valuing), highly portable bearer assets, which cannot be physically confiscated, frozen, looted, or inflated away by predatory and/or profligate governments, and which permit flexible custodial arrangements not possible with chunks of metal in a hole in the ground.

It does seem odd that countries and companies seem to be taking steps which will irreversibly limit their future markets. Even if everything eventually returns to “normal”, the world will never be the same. Potential customers in countries from India to Brazil will have taken note of the risks of dealing with certain parties.

Switzerland abandoning neutrality is a great opportunity for Dubai. ApplePay throwing the Moscow subway into chaos by cutting Russians off from their payment system more or less guarantees there will be amazing opportunities for those who can develop less-politically-risky competitor systems.

It does seem odd that countries and companies seem to be taking steps which will irreversibly limit their future markets.

I don’t think that anybody has really thought this through or assessed the long-term consequences. If this means that Switzerland, without any legal action or parliamentary consultation, automatically adopts any policy proclaimed by the European Union regulators, then in what effective sense can it be said that Switzerland is any safer or more neutral than any EU country? For more than a century, customers have paid a substantial premium for the independence of Swiss banks. An individual bank may choose whether or not to do business with a customer and when suspect dealings should be reported (subject to Switzerland’s rigid bank secrecy laws), but cutting off access and freezing funds for an entire country overnight by a decree from the federal executive is something I don’t think has ever happened before. (But then, I don’t follow these things closely, and there may be precedents.)

This came as such a surprise it will take some time for the implications to sink in. But one of the main reasons for doing business with Swiss financial institutions is precisely because that kind of surprise isn’t supposed to happen, as opposed to banking in the U.S., London, or Frankfurt, where they have a history of occurring.

The advantages of Switzerland as a financial centre have steadily eroded since the 1980s, as Switzerland has buckled under and accepted disclosure of clients’ information to grabby jurisdictions such as the U.S. and EU. The situation is so bad with the U.S. that most Swiss banks refuse to open accounts with U.S. nationals because the cost of administration to comply with all the snooping exceeds the fees they’d make from the account.

Even if these measures are lifted relatively quickly, just knowing it can happen is going to change the perception of Switzerland in the minds of those who wish to insulate their assets from external political influences.

I relocated to the Austin Area, Texas two and half years ago, and the economic boom here is unimaginable – you can not drive 1/2 mile without seeing men (and women) building some new factory, subdivision, or highway (not standing around in white hard hats like some other states)! It is cheaper to puchase new constuction here, than existing construction. No state tax, laws protecting rights, low energy costs, we have every kind of manufacturing you can imagine, including semiconductor fabs, crypto mining is moving here too, and list goes on.
I compare it to Paris in the late 1800s and New York City in the early to mid 1900s (from what I’ve read) .
And if things continue to slide for the other states in the U.S., Texas can always re-declare its Independence (FYI March 2nd is Texas Independence Day)!
Go Texas! 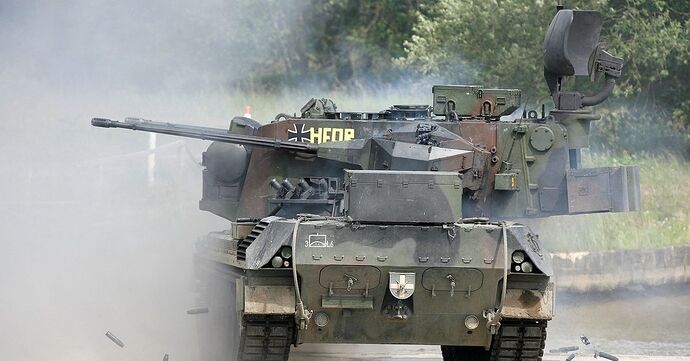 Neutral Switzerland has vetoed the re-export of Swiss-made ammunition used in Gepard anti-aircraft tanks that Germany is sending to Ukraine, the government said on Tuesday.

Moon of Alabama, which is probably no more reliable than the New York Times, ascribes Germany’s offer of mothballed equipment which requires unavailable ammunition as a ploy to fend off demands from Germany’s aggressive NATO partners that she do more to expand the war.

"… It is a short range (5 km / 3 miles) anti-air system on a tank chassis useful against helicopters, drones and low flying planes. That Scholz decided to offer these, instead of real tanks or armored infantry carriers as the U.S. and the camouflage-Green party demanded, is a nice way out. It guarantees that the Ukrainians will not be able to use them before the war is over. …

The Germany army retired their last one of these in 2010. They have since been held in storage. …

There are probably less than ten people in the current Bundeswehr who still know how to operate and maintain a Gepard. There is thus little chance to find German crews for them.

If the Ukrainians really want to use these outdated systems they will have to train fresh crews for at least a year. Otherwise those guns will be ineffective and of little use. …

Chancellor Scholz likely knew all that. The offer of Gepards is a safe way to relieve the pressure put onto him to send arms to Ukraine. It is an offer of a system that can not be used within the timeframe of the war and for which he can not deliver the necessary specialized ammunition. …

Are there still some Lockheed F-104 Starfighter in German storage? If so those flying coffins should be offered next."