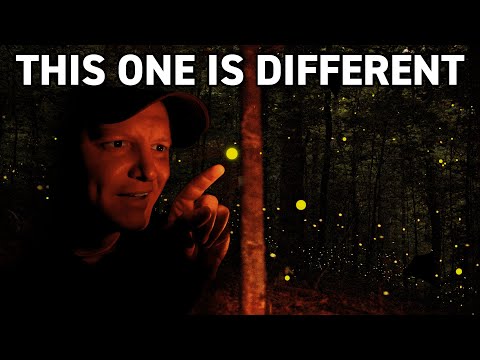 How do they do it—and why?

This brings back a memory of fireflies which was remarkable - turns out to have been ‘once in a lifetime’; never seen anything remotely similar and probably will not in my limited future.

I was in med school and living in Hopewell NJ, not far from Princeton. I inhabited a rented cabin on what had previously been a farm. In front was a fallow field, of about 4 acres, rather low in altitude, but not quite swampy. Maybe around 21:30 one evening, I came outside to find the air completely still with a thin layer of ground fog (maybe 4 inches thick and just above the tops of the dense, wheat-like vegetation). Barely above the fog layer there was a literal carpet of fireflies (also a few inches thick), which stopped me in my tracks. The sheer number of fireflies was breathtaking, awe-inspiring. These were not synchronized, but the randomness of their flashing did not detract from the impression that they existed as a solid sheet.

The question of how and why the synchronized ones do that, begs for a scientific answer. Fascinating!

I had always read that in response to certain stimuli, like maybe a nearby explosion, an entire field of fireflies could synchronize their flash. But I’ve never seen that.

Last week was, I think, pretty much the height here for the fireflies. Peak mating season. Over the weekend the weather turned cold, and last night I didn’t see so many of them.

In April when I walk late t night, I see the larvae glowing in the loose scree along the sides of the road, that’s evidently where they breed. In the fall, I sometimes see this again. (But why? I mean, they breed in June, manifestly.) I’ve read that they glow during every stage of their existence.

There’s nothing more wondrous than standing in a field filled with them on a dark warm starry night, when you can hardly tell Earth from Heaven.

What’s that short story maybe set in the 1930s, about the young woman, a burn survivor, on a remote Texas ranch visited by the narrator - ? On the one hand, her life has no beauty, because her family hides her disfigured self away in the kitchen where she does all the cooking. On the other hand, she loves beauty: at the conclusion she takes the narrator out in late evening to see the fireflies all filling the apple orchard in bloom. We have this every year, she tells him.

Well?!? Does anybody know the story Jzdro is referencing? I’m dyin’ of curiosity!

I’m also still looking for the crocodile-pit story. Internet Archive has scanned the cover photos of Boys’Life over years, including all the 1960s. But for the 1960s they have scanned content only for January 1960 - but I need to keep trudging through the decade on that site.

I don’t suppose you read Boys’ Life when you were a little gal?

Er, no….my brother is 8 years older and was away at school, so we didn’t get that…