Live streamed from Tesla’s Gigafactory Nevada on 2022-12-01, Tesla announced the first delivery of its Tesla Semi, a Class 8 tractor, to Pepsi, which will use the vehicles at its plants in California.

There was one interesting “dog that did not bark” during this presentation. Among all of the revolutionary changes enabled by electrifying heavy trucks, there was not a single mention of autonomous driving. And yet, for trucks that spend most of their time on interstate highways, self-driving is a much simpler problem than cars on city streets. Further, the advantages of the electric drive train, eliminating the baroque gearboxes of diesel Class 8 tractors and incorporating transparent regenerative braking, play right into the hands of implementing autonomy.

Perhaps Tesla wasn’t quite ready to take on the Teamsters union at this stage of early adoption.

Perhaps Tesla wasn’t quite ready to take on the Teamsters union at this stage of early adoption.

There are likely many reasons why it is not ripe.

Do the Tesla semis currently use conventional trailers? If so, there would be substantial loss of flexibility in order to limit them to updated sensor – equipped trailers.

Also, substantial modifications would likely be necessary to the pick up and delivery facilities, such as either comprehensively mapping them, or equipping them with a standard set of reference markers.

Also, an unmanned semi would become a particularly good target for thieves.

According to Forbes at least one semi has driven itself across the US, with the usual human safety driver. While it’s a long way from a fleet of autonomous Amazon tractor-trailers going from warehouse to warehouse it’s showing possibilities. 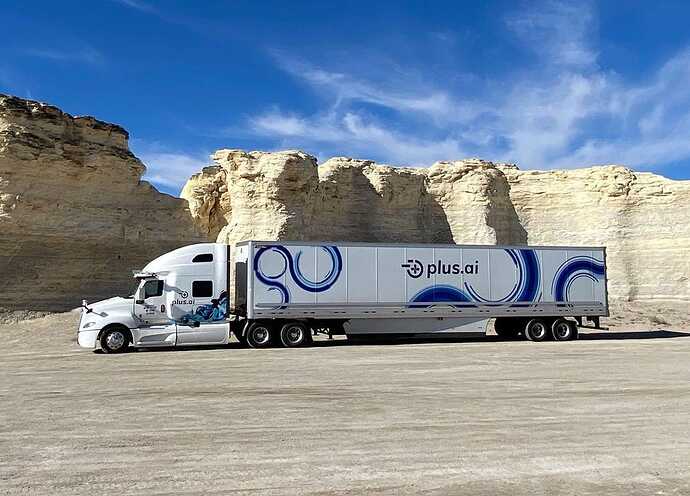 An Autonomous Semi-Truck Just Drove Across America To Deliver Butter

The three-day trip was done “primarily” in autonomous mode with a safety driver in the vehicle to take over when needed.

Also, an unmanned semi would become a particularly good target for thieves.

Not if it was armed.

Not if it was armed.

The first law of robotics would make that tricky, shoot to scare? Shoot out their tires while driving off?

The first law of robotics would make that tricky

Once Big Tech gets into robotics, Asimov’s Laws of Robotics will probably last about as long as “Don’t be evil.”

Once Big Tech gets into robotics, Asimov’s Laws of Robotics will probably last about as long as “Don’t be evil.”

You’re most likely right. OTOH nobody would cut off a Tesla Semi on the freeway more than once

I read (not verified) that batteries alone weigh about 12,000 pounds(!)

Link is to late in the video where the driver warns that autonomous driving of a car is different from a truck in that it is easier for a car driver to quickly take over than for a truck driver. Truck driver must normally be looking much farther ahead than a car driver.