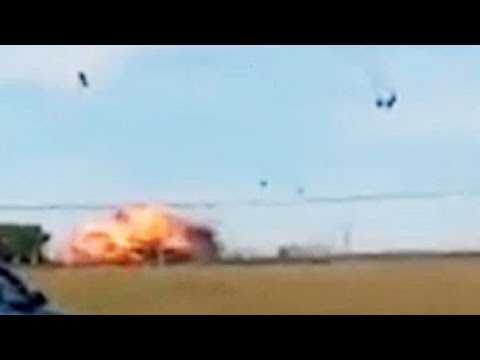 Very sad story - may the pilots and crews of the two airplanes rest in peace.

This is what happens when a pilot loses sight of the other airplane. The clips seem to me to show the Cobra pilot unaware of the location of the B-17. In formation flying, or any other close distance flying, it is essential to always be aware of where the other airplane(s) are. Situational Awareness. Unfortunately here the Bell Cobra pilot lost his - and died because of it, as well as those in the B-17.

This is what happens when a pilot loses sight of the other airplane.

I saw an analysis that pointed out that due to the long nose of the Cobra and the position of the cockpit directly above the broad low wing, visibility below the plane is next to nil. With the Cobra approaching the B-17 from above in a bank with the right wing high (apparently trying to turn back into the fighter parade path after straying outside it), it is possible the Cobra pilot never saw the B-17 prior to the impact.

That doesn’t excuse loss of situational awareness or, upon departing from the planned position in the fighter stream, not doing a fly-up to avoid conflict with any other aircraft in the low-level display.

Precisely! When in a formation and you accidentally break out, never lose sight of the other planes - great formula for a disaster. I did that once in a 4-ship; ended up screaming down on them from up high but I was smart enough not to lose sight of the other 3 and go under them while cranking my neck so I could keep them in sight. Got some ribbing about it afterwards, but all were pleased I had done the right thing in the circumstances.

Saw the B-17 the week before at Wings over Houston.

The only thing that went right was the wreckage impact was controlled.

I’m very familiar with this stuff: they’re briefing and flying it like they did decades ago. However, they’re decades older.

Here is Juan Browne’s (Blancolirio) analysis of the collision based upon ADS-B data from the aircraft, the flight plan for the airshow display, and the principles of formation flying.

The only thing that went right was the wreckage impact was controlled.

I’m very familiar with this stuff: they’re briefing and flying it like they did decades ago. However, they’re decades older.

I disagree. Accidents happen - in all ages. In the Services the young, inexperienced aviators are far more likely to be involved in some air incident.

These guys do not appear to have been physically deficient. None of the flying was high-g flying, where better physical shape would be a factor.

Listening to the commentary posted, I understand better what happened. I do not believe it was an “age” thing. More likely it was a lack of intimate experience formation flying. I remember as I noted above having something similar happen to me. And I was just the flight surgeon flying. Fortunately all the IP’s had done a good job teaching me about formation flying, so I didn’t lose sight of the formation despite having a whole lot more smash than they did. (AND I had the AF Advisor in the plane to help when I asked for help.)

@Devereaux , What are your thoughts on age as it relates to situational awareness?

I think situational awareness is more a trained skill than inate. Fighter pilots (live ones) seem to have it constantly. Retired cops NEVER stop scanning nor noticing possible threats. BUT if you don’t have it in the first place or you haven’t used it for a LONG time, you might not do so well.

Flying is a bit like riding a bike. Once you know how you merely need a refresher to be back. If you’ve ever raced, you will remember the first time back on the track after a winter off you tend to be slow for a bit - until you get accustomed to seeing the speed. Then you’re back to where you were.

Where age can make a difference is in checklist procedures. So landings can have gear-up incidents. But the adage has always been “there are those that have and those that will.).