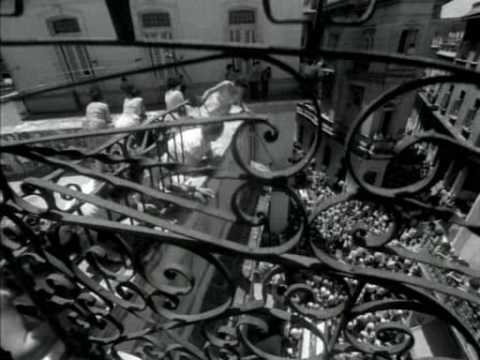 Soy Cuba (I Am Cuba) is a 1964 film by directed by Mikhail Kalatozov of the Mosfilm studio in the Soviet Union. The film, an anthology of four stories intended to show how horrible life was in pre-revolutionary Cuba, was poorly received at the time and little known until it was rediscovered by Martin Scorsese and others in the 1990s, who were stunned by the cinematography, particularly the long tracking shot in the funeral scene which starts at the 1:43 point in this clip. Wikipedia describes the shot as follows.

In another scene, the camera follows a flag over a body, held high on a stretcher, along a crowded street. Then it stops and slowly moves upwards for at least four storeys until it is filming the flagged body from above a building. Without stopping, it then starts tracking sideways and enters through a window into a cigar factory, then goes straight towards a rear window where the cigar workers are watching the procession. The camera finally passes through the window and appears to float along over the middle of the street between the buildings. These shots were accomplished by the camera operator having the camera attached to his vest—like an early, crude version of a Steadicam—and the camera operator also wearing a vest with hooks on the back. An assembly line of technicians would hook and unhook the operator's vest to various pulleys and cables that spanned floors and building roof tops.