The first person to die in the crash of a powered aircraft was not the pilot, but a passenger. The pilot, Orville Wright, survived and lived another 40 years. The cause was mechanical failure (shattering of one propeller).

I have been trying to place the host’s accent. Anyone know where he is from? Who he flies for?

Petter Hörnfeldt is Swedish and is a line training captain for Ryanair.

Thanks. I actually searched him several times & couldn’t find any info.

Wonderful bit of history. How their father must have beamed with pride over his son’s, as he was lofting along with Orville .

Isn’t it funny that in the Wright’s era (1900’s), the Print News in the U.S.A. was not completely trusted … the Wrights had to do demos in France where they became famous. Where would Wright-like inventors of new tech in 2021 do their demo flights for world fame … perhaps Switzerland, Japan, Taiwan, Poland, but U.S.A. (yet again) and China would likely be avoided because of the lack of a trustworthy 4th estate.

I read that story and much, much more amazing history in David McCullough’s Wright Brothers which can be purchased at a deep discount at U.S.A. based Thriftbooks at the following link: 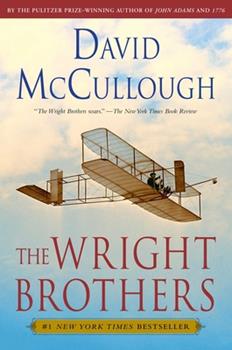 Buy a cheap copy of The Wright Brothers book by David McCullough. The #1 New York Times bestseller from David McCullough, two-time winner of the Pulitzer Prize--the dramatic story-behind-the-story about the courageous brothers who... Free Shipping on...

I read that story and much, much more amazing history in David McCullough’s Wright Brothers

Here is my review of David McCullough’s The Wright Brothers.