"Never, ever, think about something else when you should be thinking about the power of incentives.” – Charlie Munger

Government technology programs, such as fusion, need to be reformed around incentives.

I’m about to drop a bombshell on you about the government’s fusion energy program’s incentives. It places the perennial “news” about “fusion breakthroughs” (such as the recent one about “break even”) in perspective.

We’ve all heard of the X-Prize. It catalyzed interest in commercial space technology and one might well argue helped motivate the creation of SpaceX as well as Blue Origin. One of its precursors was The Launch Services Purchase Act of 1990, for which I gave testimony before Congress titled “Necessity and Incentives Opening the Space Frontier”. The key word here is “incentives”. It bears repeating the quote from Charlie Munger, Warren Buffet’s long-time partner:

"Never, ever, think about something else when you should be thinking about the power of incentives.”

Close on the heels of my testimony before Congress regarding legislated incentives to create a space launch service industry, I turned my attention to the government’s moribund fusion energy program.

The images below are of a 1995 legislative proposal sent by Robert W. Bussard, one of the founders of the US fusion energy program, to Congress suggesting that the fusion energy program be replaced by a system of prize awards for timely achievement of specific technical milestones.

The DoE commitment to very large fusion concepts (the giant magnetic tokamak) ensures only the need for very large budgets; and that is what the program has been about for the past 15 years - a defense-of-budget program - not a fusion-achievement program. As one of three people who created this program in the early 1970’s (when I was an Asst. Dir. of the AEC’s Controlled Thermonuclear Reaction Division) I know this to be true; we raised the budget in order to take 20% off the top of the larger funding, to try all of the hopeful new things that the mainline labs would not try.Each of us left soon thereafter, and the second generation management thought the big program was real; it was not. Ever since then, the ERDA/DoE has rolled Congress to increase and/or continue big-budget support. This worked so long as various Democratic Senators and Congressmen could see the funding as helpful in their districts. But fear of undermining their budget position also made DoE bureaucrats very autocratic and resistant to any kind of new approach, whether inside DoE or out in industry. This led DoE to fight industry wherever a non-DoE hopeful new idea appeared.

The legislation, itself, was written by me in 1992, as Chairman of the Coalition for Science and Commerce with input actively solicited from all the privately financed fusion energy companies in existence during the early 1990s. The idea was to make a competition that the likely participants would view as not only fair, but also as likely to attract participation from capital sources not normally available to high-risk, long-term-payback development projects.

A table of contents of the cover letter and legislative language:

An interesting and even amusing historical anecdote: I hadn’t participated in politics for a few years when the late Robert Johnson, with whom I was working at the time, came up to me with a letter in hand and said (paraphrasing), “I just received this from a colleague of mine at UCLA. Since I know you’re interested in fusion energy technology and its policy, I thought you might want to review it. Apparently its gone out to all the research labs as well as Congress.” When I looked at it, I recognized Bob Bussard’s letterhead, and then when I opened to the legislative language, there I saw the type from my old dot-matrix printer – which I was still using at the time I put forth the proposed draft legislation to the various fusion entrepreneurs. Bob (Bussard) had actually Xeroxed my draft – perforation tears, sprocket holes and all. You see, I had no money by the end of my attempt to change the world “through proper channels” and was doing the best I could with very old equipment. 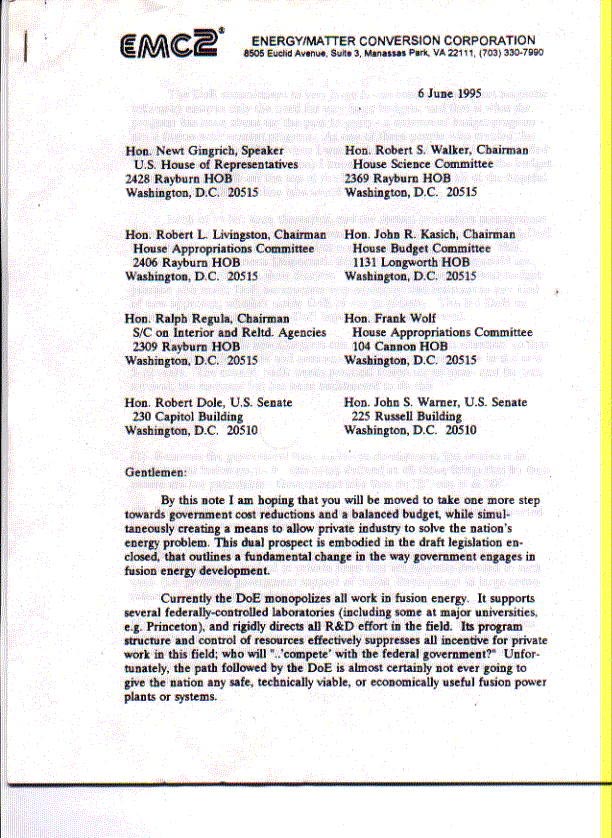 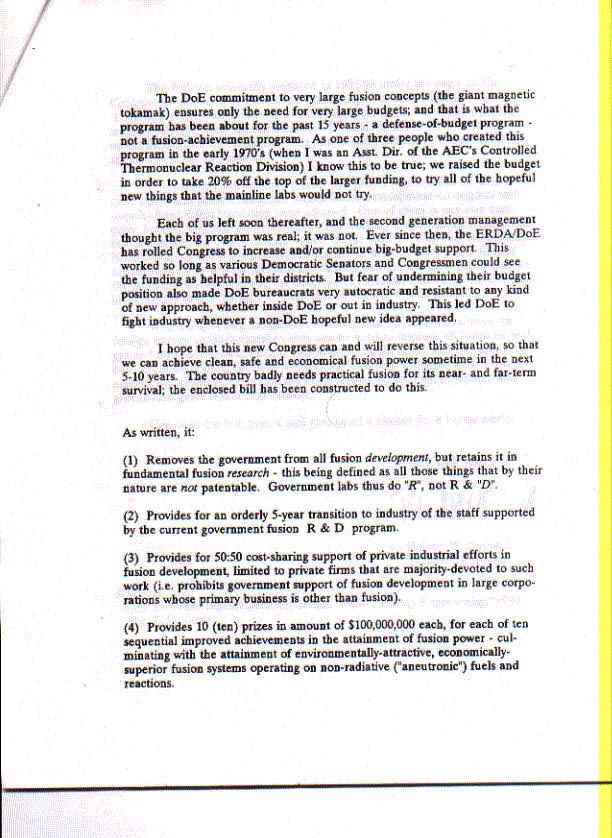 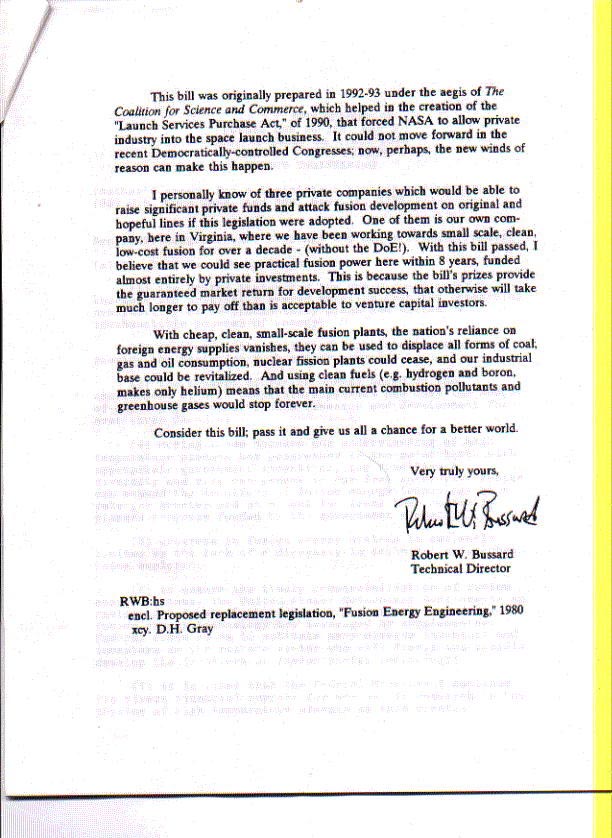 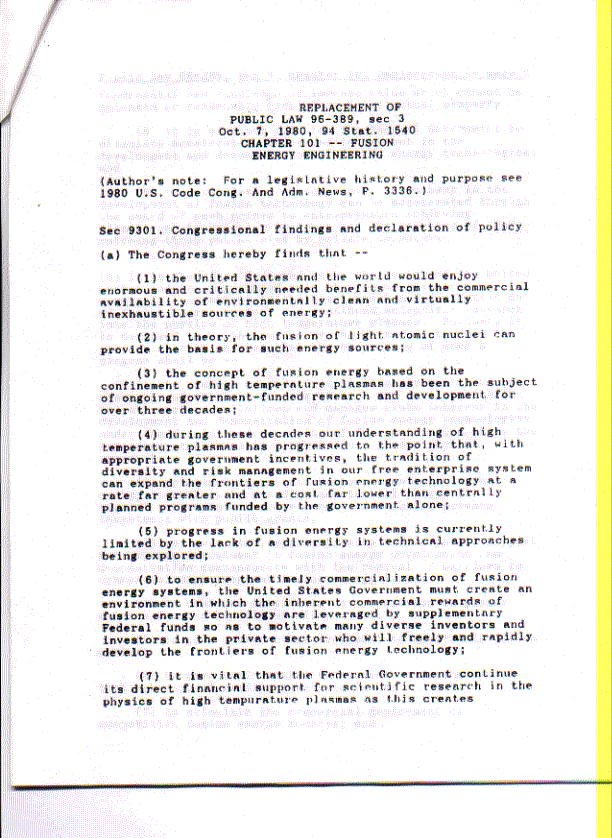 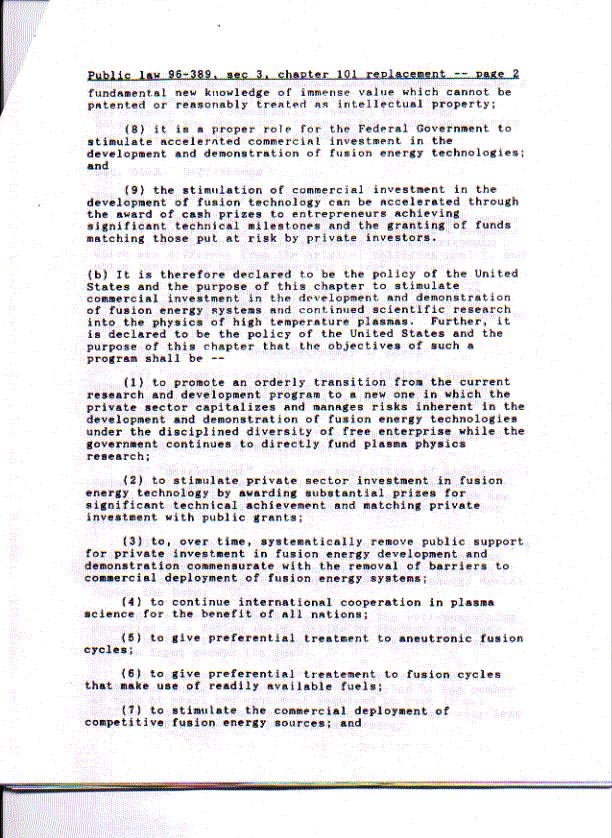 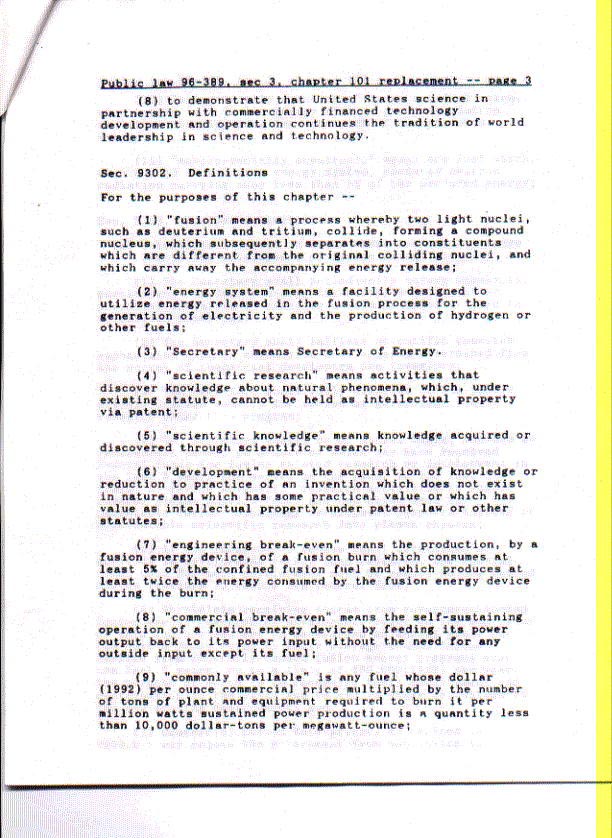 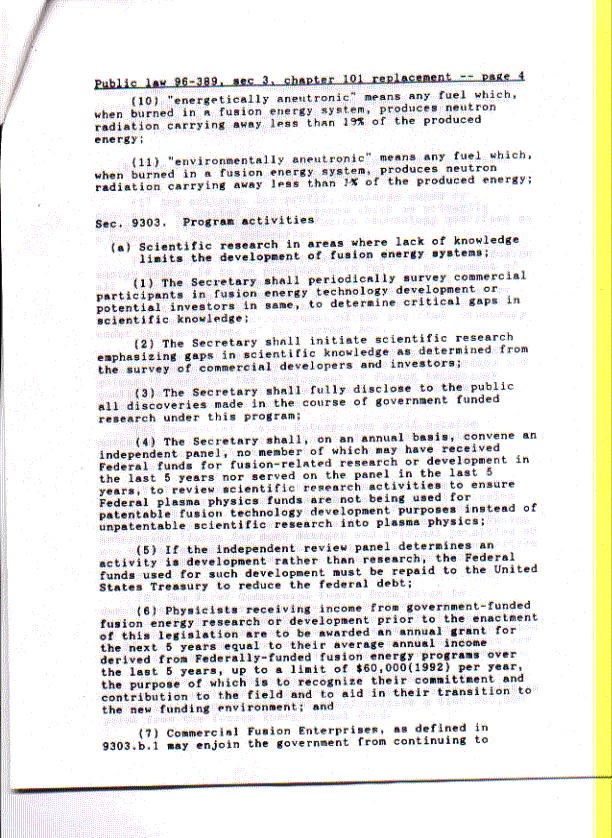 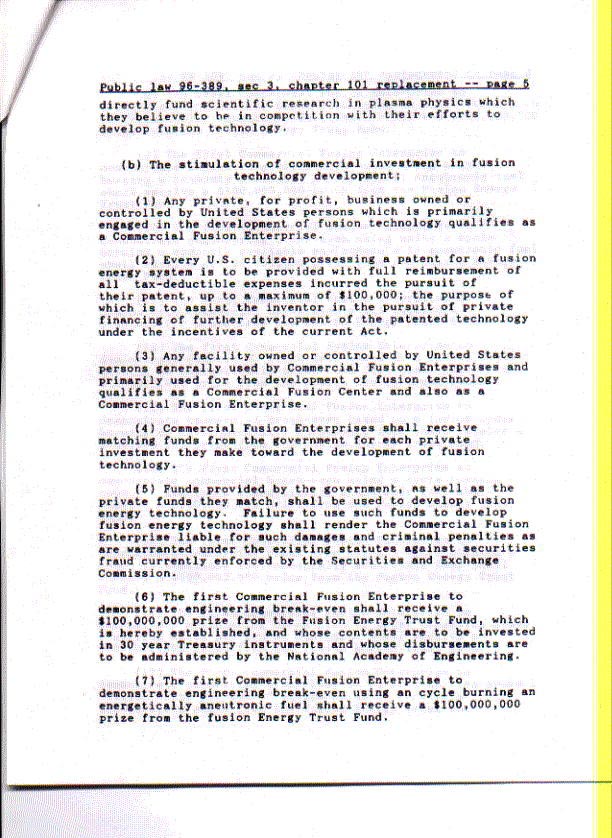 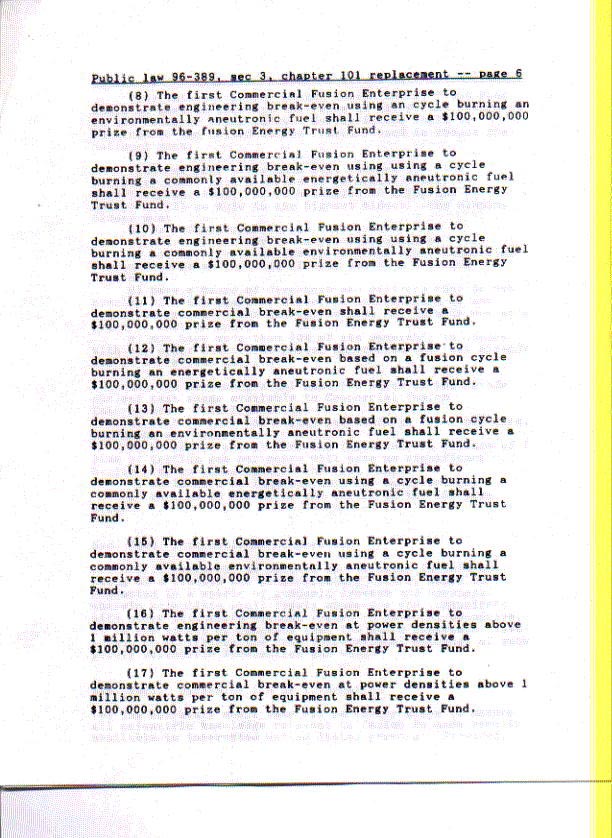 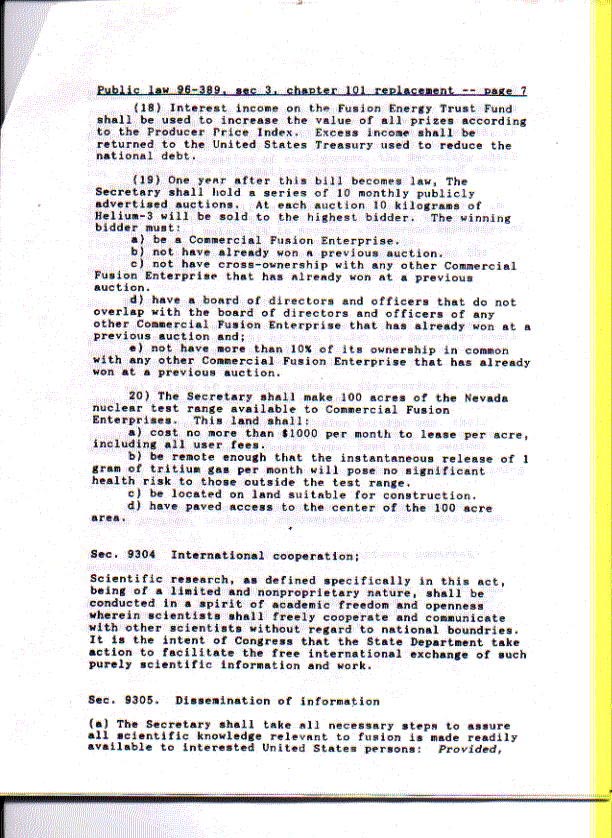 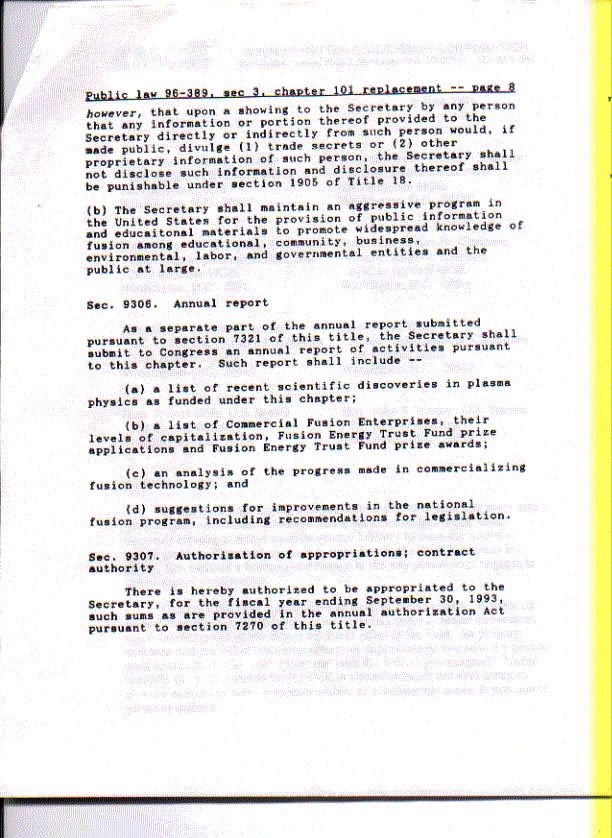 we raised the budget in order to take 20% off the top of the larger funding, to try all of the hopeful new things that the mainline labs would not try.

Outsiders can try to play the bureaucratic game – but insiders play it so much better. It is no surprise that the attempt to get surreptitious funding for high-risk research ended up simply raising the amount of funds dedicated to job preservation in mainstream research.

In the recent “victory” panel discussion to which Mr. Walker linked, the Director implied that 70% of the work on fusion at Lawrence Livermore was actually dedicated towards maintenance of the thermonuclear weapons stockpile. It is an open question as to whether research on fusion power is really just the loss leader for funding for weapons research?

We should never forget ZETA – the valiant English attempt to build a Zero Energy Thermonuclear Apparatus, where Zero Energy meant producing as much energy as it consumed. It was a failure, and that was in the 1950s, almost three quarters of a century ago. Fusion power is difficult! More difficult than SpaceX’s reusable rockets, where the technology had been demonstrated by the DCX Clipper decades earlier.

A rational energy R&D policy would focus the always-limited available funds on nuclear fission, where the main impediments to rapid commercialization are bureaucratic. But it seems that rationality is out of style these days.

This has been explicit from the outset. The funding for the National Ignition Facility (NIF) was considered part of the Stockpile Stewardship Management Program (SSMP) program which would maintain nuclear weapons after the end of underground testing. In 1997, the chief architect of the SSMP testified to Congress that NIF was “designed to produce, for the first time in a laboratory setting, conditions of temperature and density of matter close to those that occur in the detonation of nuclear weapons. The ability to study the behavior of matter and the transfer of energy and radiation under these conditions is key to understanding the basic physics of nuclear weapons and predicting their performance without underground nuclear testing.”

Between 2013 and 2015, the NIF performed experiments using plutonium targets to study compression of the pit in thermonuclear primaries. This was entirely weapons related and had nothing to do with fusion.

The recent fusion shots, including the one in December 2022, have used the intense neutron flux created by the reaction to study behaviour of materials in thermonuclear bomb environments.

I had long been puzzled why large prizes (privately or publicly funded) for desirable technological achievements are so little used—they cost nothing if nobody wins, and everybody wins if somebody does. Experience shows that an achievable prize often generates more private investment toward the goal than the amount of the prize. As Jerry Pournelle wrote on 2003-06-11:

I can solve the space access problem with a few sentences.

Be it enacted by the Congress of the United States:

The Treasurer of the United States is directed to pay to the first American owned company (if corporate at least 60% of the shares must be held by American citizens) the following sums for the following accomplishments. No monies shall be paid until the goals specified are accomplished and certified by suitable experts from the National Science Foundation or the National Academy of Science:

That would do it. Not one cent to be paid until the goals are accomplished. Not a bit of risk, and if it can’t be done for those sums, well, no harm done to the treasury.

I had Newt Gingrich persuaded to do this before he found he couldn’t keep the office of Speaker. I haven’t had any audiences with his successors.

Henry Vanderbilt points out that having a prize, say $1 billion, for the second firm to achieve point (1) above will get more into the competition, and produce better results. I agree.

I now believe the key to understanding why prizes are not used is a phrase coined by (as far as I know) and frequently used by Glenn Reynolds, law professor and Instapundit, “Insufficient opportunities for graft.”

Actually Pournelle’s “Citizen’s Advisory Council” to Reagan was our inspiration for what became The Launch Services Purchase Act of 1990: Establish a fund to just pay so much per ton of mass – even if it is just water – to LEO, as an incentive for commercial launch services. The inspiration for that was The Kelly Act of 1925.

Reagan didn’t accept the advice. At least Bush continued Reagan’s stated – although not enforced – policy of purchasing launch services from the private sector in a commercially reasonable manner. That’s what we ended up putting into law so that it couldn’t be changed by Presidential fiat. Unfortunately, NASA didn’t really follow the law until Musk. Even so, what we really wanted was to get NASA out of the launch system development business entirely.

I now believe the key to understanding why prizes are not used is a phrase coined by (as far as I know) and frequently used by Glenn Reynolds, law professor and Instapundit, “Insufficient opportunities for graft.”

It is harder to explain the failure of The Hutter Prize For Lossless Compression of Human Knowledge to find major private sector funding despite Marcus Hutter being senior DeepMind scientist. The credentials and positioning are solidly within one of the biggest piles of private capital in the known universe that has every incentive to advance the state of the art in language models and machine learning.

As I’ve described before, I very quickly – about the same time I wrote the OP legislation – figured out there was something drastically wrong with the tax base that needed to be corrected. I’m now of the opinion that the reason the tax base can’t be corrected is that the monetary system has a systemic bias toward centralization of power whether in the public or private sectors – and that none of these ills can be resolved short of a radical decentralization in the way civilization’s positive network externalities enter the economy as money. Failure to do this with all due deliberation will result in “The Great Leveler” doing it.