On 1942-06-04, Adolf Hitler made a secret visit to Finland to attend the birthday celebration for Field Marshal Carl Gustaf Emil Mannerheim, commander in chief of the Finnish Defence Forces. Finland and Nazi Germany were co-belligerents against the Soviet Union at the time, with Hitler wishing the Finns to tie down Red Army units on their border which could otherwise be diverted to counter the German invasion of the Soviet Union.

After the official proceedings, Hitler, Mannerheim, and other German and Finnish officials met in Mannerheim’s private rail car for lunch and conversation. Finnish radio had set up a microphone to record the birthday celebration and the sound engineer operating a tape recorder outside the carriage left it running during the private meeting. Hitler’s SS guards discovered the operating recorder after eleven minutes and demanded it be shut off and the tape destroyed. The engineer complied with the first order but not the second and the tape remained in the archives of Finnish state radio until it was released around 1960.

Although we have hours of sound films and recordings of Hitler’s speeches in his strident and theatrical oratorical voice, this is the only known recording of Hitler speaking conversationally in a normal, non-elevated voice. The content is particularly interesting. Hitler gives a remarkably candid assessment of the reversals the Nazi forces encountered in the initial assault on the Soviet Union, the Nazi intelligence failure in dramatically underestimating the Soviet tank forces they would face, the delays to Operation Barbarossa caused by the invasions of Greece and Yugoslavia, and Italian defeats in North Africa. While speaking with an ally he wanted and needed to keep on board, the bluster of his public persona was absent and he sketched a realistic view of the situation.

35,000 Panzer…we have at the time more than 34-thousand Panzer destroyed. If somebody had told me this to…had said: you…if a general of mine had declared that a state here had 35,000 tanks, I had said “Mein Herr, you are seeing everything double…or tenfold. This is crazy. You are seeing ghosts. I had not thought this possible.”

This is a photo taken during the meeting that was recorded. Mannerheim is at the right. 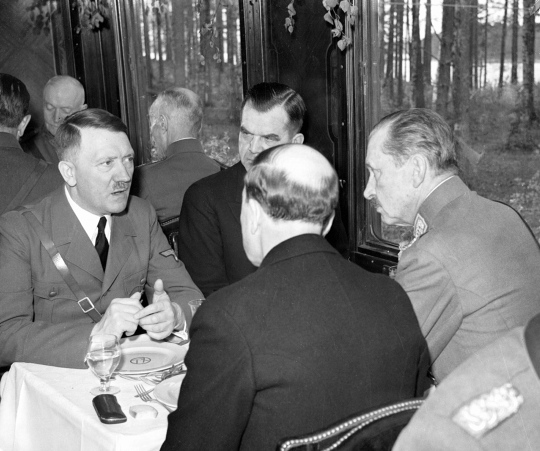 As a consequence of Finland’s alliance with Nazi Germany between 1941 and 1944, Finland lost almost 10% of its territory to the Soviet Union and paid war reparations to Moscow totaling US$ 4.36 billion in 2021 dollars which were not paid off until 1952.

Let me add some context:

The (Winter) war began with a Soviet invasion of Finland on 30 November 1939, three months after the outbreak of World War II, and ended three and a half months later with the Moscow Peace Treaty on 13 March 1940. 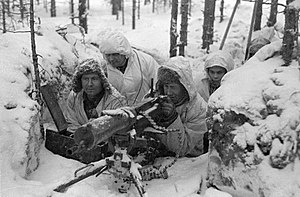 The Molotov–Ribbentrop Pact was a non-aggression pact between Nazi Germany and the Soviet Union that enabled those two powers to partition Poland between them. The pact was signed in Moscow on 23 August 1939 by German Foreign Minister Joachim von Ribbentrop and Soviet Foreign Minister Vyacheslav Molotov and was officially known as the Treaty of Non-Aggression between Germany and the Union of Soviet Socialist Republics 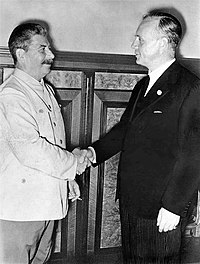 The Molotov–Ribbentrop Pact was a non-aggression pact between Nazi Germany and the Soviet Union that enabled those two powers to partition Poland between them. The pact was signed in Moscow on 23 August 1939 by German Foreign Minister Joachim von Ribbentrop and Soviet Foreign Minister Vyacheslav Molotov and was officially known as the Treaty of Non-Aggression between Germany and the Union of Soviet Socialist Republics. Unofficially, it has also been referred to as the Hitler–Stalin Pact, The es...

So whatever Finland did with Nazis was after getting invaded by Soviets, while Soviets were an ally of Nazis.