Some role-playing games have rules in which multiple dice are rolled with the player using the highest value of any of the dice. This is sometimes called “rolling with advantage”, and biases the result toward higher values. But how much, and how does it depend upon the number of faces on the dice and the number of dice rolled? Our old friend the rhombic icosahedron makes an appearance. 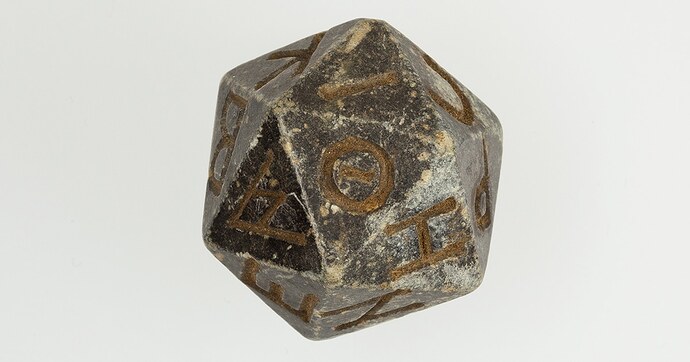 I came across this article today and was reminded of this post. Apparently, 20-sided dice (regular icosahedra) were used to aid with divination in ancient Greece and Rome:

The exact use of icosahedron dice is still rather obscure. According to the Metropolitan Museum of Art, “They may have been used in conjunction with an oracle inscribed on a pillar set up in a public place.” Casting the die determined what part of an oracle to consult. Oracles were usually priestesses who were believed to interpret or speak for the gods. Their sayings were often written down and could be consulted by those seeking wisdom or prophecy.