“The rise and fall of rationality in language”

In a paper published in PNAS, “The rise and fall of rationality in language”, the authors use Google nGram Viewer to analyse a corpus of millions of books published between 1850 and 2019 for frequency of words indicating the balance of emotion and reasoning. They found the change in both nonfiction and fiction writing, and in New York TImes articles and Google search terms over the period they were available. They summarise their results as:

The post-truth era has taken many by surprise. Here, we use massive language analysis to demonstrate that the rise of fact-free argumentation may perhaps be understood as part of a deeper change. After the year 1850, the use of sentiment-laden words in Google Books declined systematically, while the use of words associated with fact-based argumentation rose steadily. This pattern reversed in the 1980s, and this change accelerated around 2007, when across languages, the frequency of fact-related words dropped while emotion-laden language surged, a trend paralleled by a shift from collectivistic to individualistic language.

Here is the abstract.

The surge of post-truth political argumentation suggests that we are living in a special historical period when it comes to the balance between emotion and reasoning. To explore if this is indeed the case, we analyze language in millions of books covering the period from 1850 to 2019 represented in Google nGram data. We show that the use of words associated with rationality, such as “determine” and “conclusion,” rose systematically after 1850, while words related to human experience such as “feel” and “believe” declined. This pattern reversed over the past decades, paralleled by a shift from a collectivistic to an individualistic focus as reflected, among other things, by the ratio of singular to plural pronouns such as “I”/”we” and “he”/”they.” Interpreting this synchronous sea change in book language remains challenging. However, as we show, the nature of this reversal occurs in fiction as well as nonfiction. Moreover, the pattern of change in the ratio between sentiment and rationality flag words since 1850 also occurs in New York Times articles, suggesting that it is not an artifact of the book corpora we analyzed. Finally, we show that word trends in books parallel trends in corresponding Google search terms, supporting the idea that changes in book language do in part reflect changes in interest. All in all, our results suggest that over the past decades, there has been a marked shift in public interest from the collective to the individual, and from rationality toward emotion.

Here ts the ratio of intuition to rationality over time in the Google n-gram database.’
’

What happened around 1980? Commenting on the paper at Marginal Revolution, Alex Tabarrok notes that this is around the date of the start of the Great Stagnation.

I suggest this is the result of the New Age movement culminating in the 1970s with Esalen and est further amplified recently in Orwellian wokism, Critical Race Theory et-al all starting with both the Nazi and Stalinist ideological disinformation efforts in USA, UK from the 1930s with the Stalinists triumphant. Most of my New York City intellectual friends I grew up with in the late 1940s, 1950s and 1960s came from parents who had been members of the Communist Party USA since the 1930s. 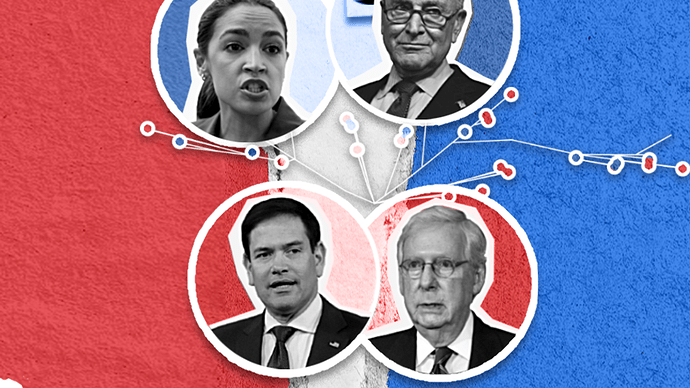 'Hope' is out, 'fight' is in: Does tweeting divide Congress, or simply echo...

USA TODAY analyzed more than 2.8 million tweets posted by members of Congress from 2011 to 2022. The language has become more divided and emotional.

While the language Congress uses on social media has become more linguistically divergent, its tone has also evolved. Using a list of polarizing words developed by researchers who study political speech, USA TODAY mapped the tenor of Congressional tweets over time.

The analysis shows that over the last decade there has been an uptick in the use of more emotion-grabbing language by Congress on Twitter, characterized by the increased use of words such as “violence,” “crime,” “worse,” “blame,” “wrong,” “threat,” “destroy,” “enemy,” “corrupt” and “scheme” as a share of all words. 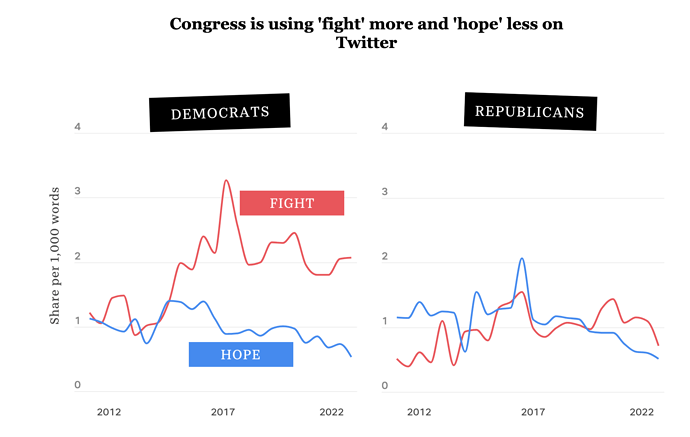 ?And this is good because ….

Nineteenth Amendment in 1920. More women in business, academia and politics than ever before. So yeah, lots more emotion. No surprise.

Samo Burja writes that no matriarchal society has ever survived.