In the early 2000s, I hosted (but wasn’t responsible for the content of) a site which was almost entirely designed in Papyrus. It’s still there. All of the text in Papyrus had to be included as images because browsers didn’t support external font definitions and otherwise Papyrus text would not display on non-Microsoft platforms.

Via the defunct Papyrus Watch, whose aim was to “document and expose the overuse of the Papyrus font.” 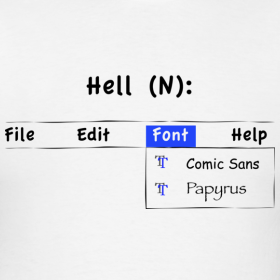