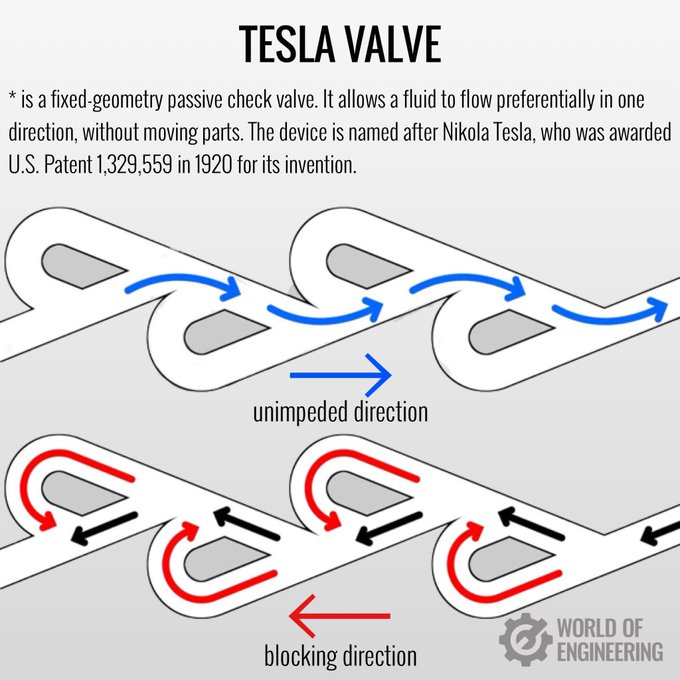 Nikola Tesla is best known among electrical engineers for his invention of the induction motor and polyphase power distribution, which were the foundation of the wide-scale electrification of industry and the modern power grid. But Tesla’s inventions were not confined to electricity. He also ventured into fluid mechanics, in 1913 inventing the Tesla turbine, a bladeless turbine exploiting the boundary layer effect and, in 1920, the Tesla valve, an (imperfect) check valve for fluids with no moving parts, for which Tesla received U.S. Patent 1,329,559 “Valvular Conduit” [PDF].

When used with pulsing fluid flows, a Tesla valve with between two and four segments can achieve flow resistance between 15 and 40 times greater in the blocking direction than in the unimpeded direction and, with no moving parts, is immune to wear and failure modes of conventional check valves, With steady flows, it is less efficient, with blocking factors between 2 and 4.

The Tesla valve is used in microfluidics, where its lack of moving parts makes it easy to fabricate and, in many applications, its small leakage can be tolerated.

Here is a video that explains how the Tesla valve works.

And, of course, the Action Lab guy made a Tesla valve drinking straw!

As a straw, the asymmetry in flow was only 1.5:1 even though it has a dozen segments. The claim in the video is that it works better for gases than liquids. It’s not clear why that should be. The only candidate reason that springs to mind Reynolds number. I’d expect it to work best at high Reynolds number but the viscosity is in the wrong direction for that explanation to work.

This recent paper found that the ratio was near unity for low Reynolds numbers (<100) and only rose to about 2:1 for Reynolds numbers above 300 for steady flow. This roughly agrees with the findings of the straw video, above.

I remain skeptical regarding the claim that it works better for gases. Given that the kinematic viscosity of air is about 10 times higher than it is for water (yes, there is a sense in which air is more viscous than water), it’s even harder to attain higher Reynolds numbers in air for the same dimensions.

From what I’ve read, and that paper seems to confirm, is that the Tesla valve works best as a diode in rapidly alternating flows or when controlling the propagation of short pulses. This is consistent with its application in pulse jet engines, where you want to allow the smooth flow of fuel into the combustion chamber but (mostly) block propagation of detonation gases back up the fuel line. This is traditionally done with shutters, but apparently a Tesla valve will do the job acceptably with no moving parts.

Qualitatively, this seems to make sense, since a short pulse is more likely only to make it through a limited number of stages in the cascade, so if the pulse is short and sharp enough, little of it will make it through, while a steady flow in the forward direction meets little resistance.

Of course, anybody trying to use intuition in something involving turbulent fluid flow is in a state of sin.