"The Three Body Problem" on Film

Cixin Liu’s science fiction trilogy “The Three Body Problem” made quite a splash when it was first published in China in 2006. English translation followed in 2014. Certainly, the first volume of the trilogy is a must read for sci-fi aficionados.

Apparently there have been several attempts to make a movie of the book – naturally very challenging given the length & complexity of the trilogy. (Think of the compromises made in the New Zealand filming of “The Lord of the Rings”). The most recent attempt is an animated series currently being released by Bilibili, a major Chinese anime producer. No word yet on when/if an English-subtitled version might be produced.

In the meantime, here is the theme song from the series, performed by a highly talented Chinese lady who performs under the name G.E.M. (“Get Everyone Moving”).

In the meantime, there’s an excellent Chinese scifi movie that’s still optimistic both about technology as well as about international cooperation: 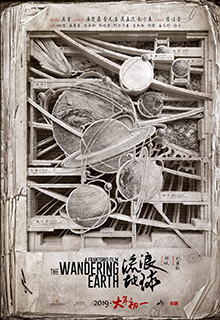 The Wandering Earth (Chinese: 流浪地球; pinyin: liúlàng dìqiú) is a 2019 Chinese science fiction film directed by Frant Gwo, loosely based on the 2000 short story of the same name by Liu Cixin. The film stars Qu Chuxiao, Li Guangjie, Ng Man-tat, Zhao Jinmai, Wu Jing and Qu Jingjing. Set in the far future, it follows a group of astronauts and rescue workers guiding the Earth away from an expanding Sun, while attempting to prevent a collision with Jupiter. The film was theatrically released in China on...

Thank you, eggspurt, for the heads-up about the “Wandering Earth” movie. There is an English-dubbed version of the full 2 hour movie on YouTube.

After a stately premise-setting opening, the movie quickly becomes an action-packed visually-stunning extravaganza, where everything that could go wrong does indeed go wrong. However, there is never any doubt that the teenage rebellious hero, with his annoying bubble-gum popping sister, estranged astronaut father, and reliable grandfather, will save the day. The movie is blessedly free from Western-style Political Correctness, although the dissolute blond-haired Chinese-Australian sidekick might represent Chinese-style Political Correctness.

I have been impressed before with a number of Chinese movies and TV shows. While “Wandering Earth” seems to be mainly aimed at a teenage/James Bond-style audience, it also impressively demonstrates that China’s movie industry has world class capabilities.

One of the reviewers mentioned that the movie was quite different from the 48-page short story which inspired it: “The Wandering Earth”, by Cixin Liu, written in 2013 and published in an excellent English translation in 2021. (ISBN 978-1-250-79683-7). Having watched the movie, I had to read the book (a collection of 10 short stories).

The short story is much more cerebral than the movie, although there are plenty of disasters as Earth’s Coalition government executes the difficult plan to move the entire Earth to a new orbit around Alpha Centauri, a thousand generations in the future. The old narrator tells the story of his life.

When scientists 4 centuries earlier had determined the Sun was going to go nova in about 400 years and destroy the Solar System, humanity had split into two camps. The “Leavers” wanted to abandon Earth, build giant spaceships, and head off into the void. The “Takers” wanted to leave the Solar System, but take Earth along with them. The Takers won the argument, but Leaver sentiment never disappeared. (Liu’s premonitions of Brexit!).

With immense effort, the Earth was eased out of its orbit and made a series of damaging ever-widening elliptical orbits around the Sun, finally passing Jupiter for a slingshot maneuver to propel it on the 2,500 year journey to Alpha Centauri. Then the real problem happened! Four hundred years had then passed since the initial determination, and yet the Sun had not gone nova. A civil war began between the Coalition government and a surviving population which believed it had been misled.

Having finished the book, let me put in an expanded plug for Cixin Liu’s collection of 10 short Sci-Fi stories, “The Wandering Earth”.

The title story “The Wandering Earth” is itself well worth reading. In several of the other stories, Liu performs the critical Sci-Fi function of posing thought-provoking scenarios.

For example, in the story “Sun of China”, he envisages a peaceful near-future world in which scientists have developed an extremely light strong reflective flexible material which allows the construction of a giant mirror in space. That mirror becomes a second sun, allowing modification of climate & rainfall for the great benefit of all mankind. But the huge delicate space mirror requires continual maintenance. How to find a team of personnel for this dangerous, tedious, physically-demanding, remote task, where a moment’s inattention can result in death? Should it be PhD astronauts? Or would it be better to employ the bold but barely literate men who clean the windows of Beijing’s tall high-rises?

In “Devourer”, Liu posits that one of the many dinosaur species on Earth a hundred million years ago had developed intelligence, technology, and space-faring ability. That species escaped destruction from the asteroid which ended the Cretaceous by leaving Earth and heading for the stars. What if they now return to Earth?

My favorite in this collection is “Curse 5.0” – a hilarious tale in which Liu pokes fun at himself. The original Curse was a rather harmless computer virus developed decades ago by a highly talented young female programmer who was upset at her boyfriend. But over the years, other programmers found it and made it more dangerous. In a near-future city controlled by Artificial Intelligence in the age of the Internet of Things and self-driving cars, when drunken destitute Sci-Fi author Liu finds an abandoned laptop while searching for discarded food in a trash can, things can only go from bad to worse.

For anyone who is in the market for Sci-Fi short stories, this collection is highly recommended.