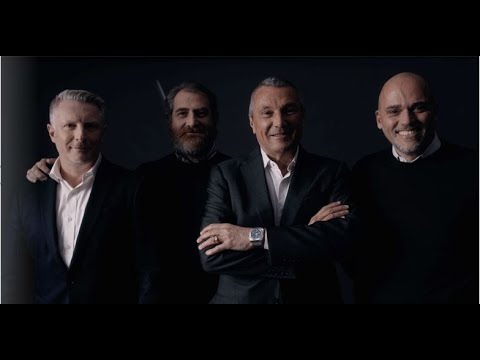 The Bulgari Octo Finissimo Ultra is the world’s thinnest mechanical watch at just 1,8 milimetres. The manufacturer describes it as follows.

With an astonishing total thickness of 1.80 mm, the Octo Finissimo Ultra is far more than just the world’s thinnest mechanical watch. It expresses the desire to go beyond the limits of normality by playing with extremes. Sporting a monochromatic look in sandblasted titanium, the timepiece matches its ultra-thin case with an integrated bracelet, only 1.50 mm thick, while the dial invites a closer look into the details of the mechanism. A unique QR code engraving offers the ability to connect to a NFT and the metaverse, bridging the mechanical world with that of a digital dimension.

If all ten aren’t already sold out, it can be yours for only US$ 440,000. And remember, you’re not just buying a watch, you’re acquiring a unique QR code on the big gear that links it through a non-fungible token to the metaverse! This may seem a limited number of buzzwords for almost half a million bucks, but it’s hard to fit any more into 1.8 mm.

Here is a one minute music video of construction of the watch. 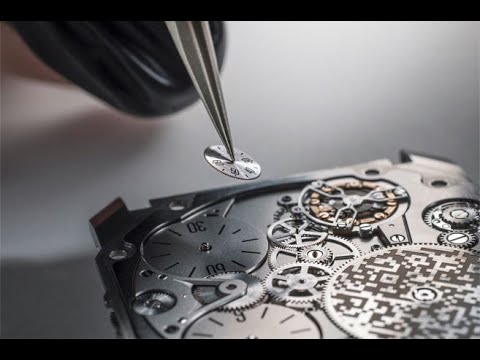 Here is a discussion of the watch with Bulgari CEO Jean-Christophe Babin.

And this is an interview with chief designer Fabrizio Buonamassa.

At 5.5mm, the Octo Finissimo Automatic is no slouch either. (review)

And the 13,000 biden-bucks MSRP is, if not accessible, not eye wateringly expensive. Jewelry and fashion brands that branch out into so-called haute horlogerie almost never manage to impress in terms of watch creativity beyond slapping a logo on an OEM movement. Bulgari seems to be an exception in this space, perhaps more so than Montblanc.

The ultra-thin crystal (0.30mm) is glued to the bezel. It rests on two silicone pads placed on screws (visible at the periphery of the barrel at approx. 3 o’clock and 6 o’clock) to preserve all functions in the event of a shock. 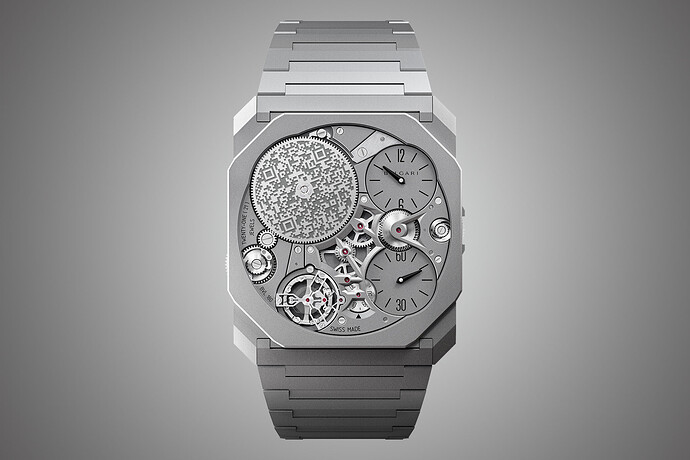 Meet the new thinnest mechanical watch in the world, the Bulgari Octo Finissimo Ultra with an ultra-thin 1.80mm case and movement.

A favorite of mine the Drive de Cartier … 6.6mm thick automatic. I find the steel model’s dimensions and aspect create a very appealing shape (review)

The QR code is profoundly ugly and the sharp edges and absence of any curved lines on it mars the rest of the dial. Like much so-called “modern art” it aligns with the intentional display of ugly dissonance and negation of that which is beautiful.

Anyone seriously considering spending the ungodly amount of seashells this thing sells for would be better of with a snapshot of their bank account balance tied to their wrist instead - almost as much signaling at a fraction of the assault on beauty the QR code represents.

Most Bulgari consumer products are marred by the very visible BVLGARI logo prominently displayed and this is an instance where that would have been a much better idea.

I was curious about the QR code on the big (“barrel” gear). 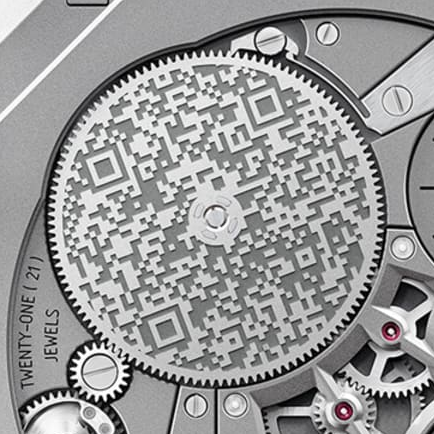 I scanned it with the Android “QR & Barcode Scanner” app, and found it simply decoded to the URL:

When you go there, it takes you through a weird sequence of pages through which you advance by using the scroll button on the mouse, which is a wacky interface. Finally, you get to a page which reveals the NFT (apparently the NFT is not encoded in the QR code, and all the QR codes are identical, which makes sense since I wondered how they would get the gear to balance if each had a different code). The NFT is an animation which looks like cubes of metal self-assembling into the watch. It’s difficult to describe; see for yourself.

After you get past that, there’s the nerdy NFT page with:

Sending the contract address to PolygonScan (which you can do by clicking it above) reveals a history with 14 transactions and a link to the “OCTO_FINISSIMO_ULTRA_NFT_#0” token tracker page, also at PolygonScan. I have no idea what any of this means.

How this is supposed to connect to the Metaverse, whatever that may be, is unclear.

What a waste of money … they probably had leftover monies in the marketing budget and they blew it on the greyscale animation on the website.

Looking at the Polygon data, it appears the 14 transactions cluster in two groups: first five on March 21, followed by another nine on April 6.

A veritable blockbuster, no pun intended. For my taste in watches, almost every other model in the Octo collection looks better.

What a waste of money

I watched the intro video. I find it telling that not one of the Bvlgari grandees shown wears the ultra-thin abomination. 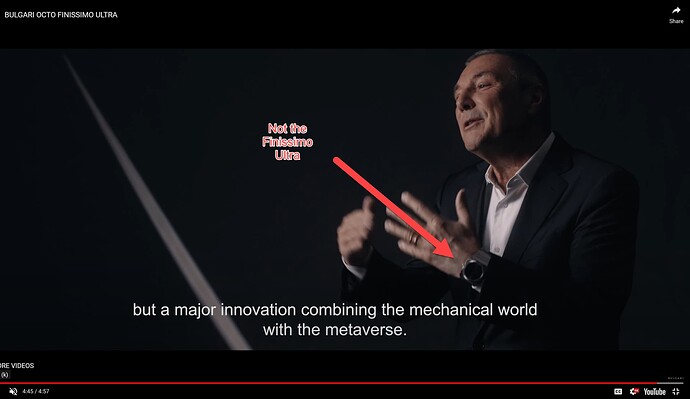 While not practical as a watch, the RM has a few things going for it:

I’d like to write something about how “innovations introduced with this watch will eventually trickle down into the regular consumer market”, but aside from marketing innovations, nothing comes to mind.

To produce the thinnest mechanical watch ever is mighty impressive. To score Ferrari as a partner is elevating. To charge $1,000 for every micron in the thickness of your —in truth, impractical — product is more than enviable. And yet, sometimes, the...

Not as ugly as the Finissimo, but can you imagine spending that much on a watch where you have to squint whenever you want to tell the time?

That’s easy … the purpose of the so-called watch is not telling time. When you buy the RM “watch”, you have an assistant for telling time. He/she/zir makes $1M/yr so they can flick up their iPhone and tell you time precisely.

The RM utility is signaling your worth to other MotUs (Master of the Universe) in the room. Basically say “look at how much money I can afford to spend on stupid shit that serves no purpose” using fewer or no words.

I believe it works surprisingly well and it’s a lot easier (possibly cheaper too) than other signals, such as throwing $100 bills out the window, lighting one’s cigar with $100 bills, etc. It’s also more stylish than strapping a printout of your net worth to your wrist.

What’s not to like? Portable effective value signaling. For added benefit, you could buy two and wear one on each arm. Or buy 7 and change to a different one each day of the week? Buy all of them and then enjoy having an unobtainable “commodity”?

Serious question – how many did Bezos buy already?

…the purpose of the so-called watch is not telling time

Note the the word for “watch” in French is la montre, from the verb montrer, which means “to show” or “exhibit”. It is not to watch, but to show the wealth and profligate expenditure thereof by its owner.

Here is the Watchfinder’s analysis of the Richard Mille UP-01 watch:

This is the Richard Mille promotional video.

The watch is not only manually wound, but winding it requires a special tool to engage the spline screws on the face of the watch. I’m sure if you misplace the tool, they’d be glad to sell you a replacement for a quarter of a million bucks or so.

For all the so-called technological innovation, the “watch” is fugly. At least Ferrari flexed its muscle and got its F1 drivers to pose (or Photoshop) with “it” on their wrist. I think RM is popular with F1 drivers, with Mick Schumacher, Charles Leclerc, Fernando Alonso, Lando Norris, Kimi Raikönnen, Daniel Ricciardo, and Romain Grosjean publicly wearing more traditional RM models.

And when I say “traditional”, those so-called timepieces do not make telling time easier, but rather more recognizable value signaling among the cognoscenti.

When no sponsorship money is at stake, “regular people” (?) seem to generally agree the things are downright ugly

I’m sure if you misplace the tool, they’d be glad to sell you a replacement for a quarter of a million bucks or so.

Yep, sort of like the grandfather clock I grew up with. Had a key inside and you had to take it out to wind it up every few days or else it would no longer go “tick, tock, tick, tock”… The “smart money” will probably tape a “key” on the back of the watch…

The irony of this is that due to “technology” the watch features are so small that you will have a hard time actually telling the time. Older people, presumably richer - if one is to go with the silver fox dutifully going for a run in the early morning hours before taking the prancing horse car for a spin - will struggle with near vision even more so the whole thing becomes pure net worth signaling.

Hodinkee published a review of the world’s fugliest watch, the RM-01.

As it turns out, the photos make it clear it’s a contraption that can’t really be used to tell time, but it looks ugly on the wrist too. The comments are worth reading. I don’t envy the reviewer’s job on this assignment

make it clear it’s a contraption that can’t really be used to tell time, but it looks ugly on the wrist too. The comments are worth

Kind of like the new ford lightning pickup truck can’t be used as a truck. It is maybe Fords version of Chevy’s El Camino.

Hey, Chevy El Camino has a cult following (never had one but I always liked it)