This Week’s Book Review – Clash of the Capital Ships 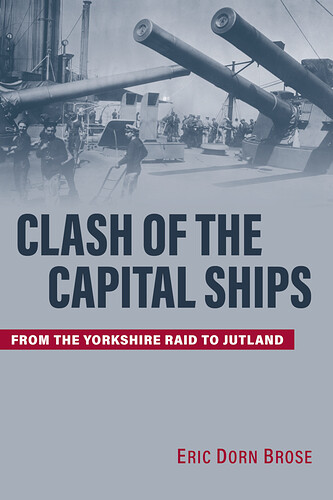 Clash of the Capital Ships800×1200 210 KB
Looking for a good read? Here is a recommendation. I have an unusual approach to reviewing books. I review books I feel merit a review. Each review is an opportunity to recommend a book. If I do not think a book is worth reading, I find another book to review. You do not have to agree with everything every author has written (I do not), but the fiction I review is entertaining (and often thought-provoking) and the non-fiction contain ideas worth reading.

The dreadnought battleship was an iconic technology in the first half of the twentieth century. Nations poured millions into their construction. Despite – or perhaps because of – the money spent building them they were rarely used.

“Clash of the Capital Ships: From the Yorkshire Raids to Jutland,” by Eric Dorn Brose, presents one period where dreadnoughts were extensively used: the North Sea during World War I. Britain’s Grand Fleet and Germany’s High Seas Fleet waged a campaign in the North Sea between 1914 and 1916 representing the dreadnought age’s most important use of dreadnoughts.

Jutland, the biggest and most important naval battle of World War I, was not fought in isolation. Brose takes a fresh look at the battle of Jutland and the events leading up to it. He reexamines all source material, British and German, including material released after the centennial anniversary of the Battle in 2016.

The result is a fresh take on the battle. He dispels hoary myths about the battle. The most pernicious was that losses in the British battlecruiser force were due to design flaws in these ships. Rather, Brose shows how they occurred due to the battlecruiser disregarding basic safety precautions to increase gunnery speed. This allowed ammunition in the magazines to be ignited by hits distant from them.

The book is much more than the Battle of Jutland, however. Brose makes a detailed examination of the entire war in the North Sea from August 1914 through the June 1916 clash off the Jutland peninsula. This included extensive looks at the clashes preceding Jutland: the Falkland Islands, the German battlecruiser raids on the British coasts and the battlecruiser clash at Dogger Bank.

He also looks at the commanders involved. Not just the big four that commanded at the battle: Jellicoe, Beatty, Scheer, and Hipper. He also examines Ingenohl and Pohl, who preceded Scheer in command of the High Seas Fleet and those in the Admiralties of both nations: Fisher, Churchill, and Oliver in Britain and Tirpitz in Germany.

Brose also presents the role intelligence played, especially how British code-breaking affected the outcome of events during the war. It was a decisive yet fickle advantage. He also looks at the real flaws of the Royal Navy: inadequate gunnery and, worse still, armor-piercing shells that frequently disintegrated when they hit.

“Clash of the Capital Ships” is outstanding history. It is well-written and well-researched, an entertaining and informative book.