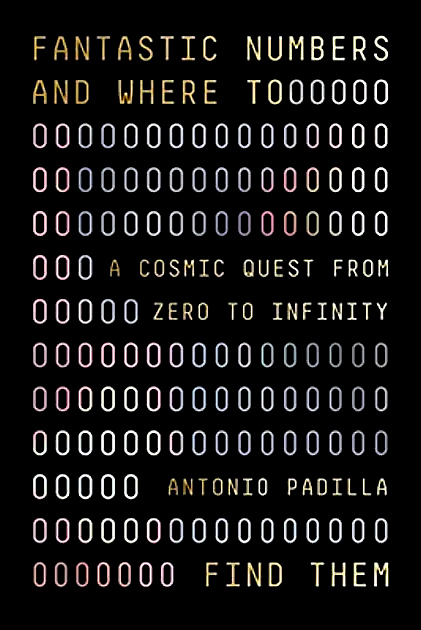 Numbers too Large (and Small) to Count

At one point in the children’s novel “The Phantom Tollbooth” its protagonist, Milo, sets out to reach infinity. When he abandons the quest as hopeless, he is advised “Infinity is a poor place.”

“Fantastic Numbers and Where to Find Them: A Cosmic Quest from Zero to Infinity,” by Antonio Padilla holds a different view. As the author shows, infinity can be terrifying, but it is filled with an endless amount of numbers.

This is not a book just about numbers. It is about the relationship between numbers and physics, and how the world works at both the largest and the smallest scales. The numbers Padilla examines are fantastic in two senses. They are so extreme as to challenge belief and they are so extravagant as to seem fancy. And they define how the universe works.

Padilla goes to extremes. The first third of the book deals with big numbers, while the second third examines small numbers. The third section, Infinity, wraps everything up, including a discussion on the theory of everything.

He presents a slew of curious numbers. He introduces readers to the googol (that is how it is spelled) and the googolplex. A googol is a one followed by 100 zeros. A googolplex is a googol to the googolth power. It is not the largest number he discusses. He introduces Graham’s number, a number so large it is impossible to write it out before the universe ends – even if you write it a barely under light speed.

At the other end of the scale he looks at zero and the numbers close to it. He presents the history of zero. (It turns out many philosophers and scientists really hated it.) He looks at several numbers barely greater than zero and shows why these seemingly insignificant values determine our destiny.

He also takes readers on a trip through the extreme ends of modern physics. This includes chapters which venture to the edge of the universe, and chapters examining the smallest particles possible. He also shows how much physics has changed in the last fifty years.

There is math involved. Readers with technical training will be better able to follow Padilla’s discussions than those who abandoned mathematics at their first opportunity in high school. Even engineers may have difficulty following everything. Yet “Fantasic Numbers” is worth reading even if you do not grasp everything perfectly. It is an entertaining and informative book, with a high “wow” factor.