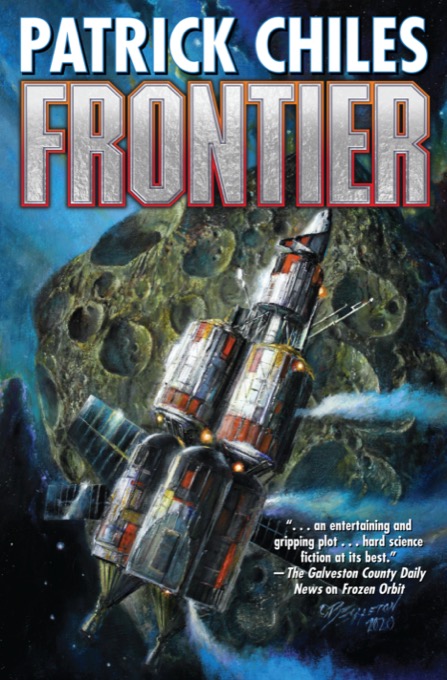 A Sino-American Battle in Space

The time is the near-future, perhaps 50 years from today. Commercial space is a major industry. Human presence in space is continuous and widespread. The United States even has a manned and armed spaceship in cislunar: space the Borman . Not a warship, it is a space-faring Coast Guard cutter, an orbital beat cop.

“Frontier,” a science-fiction novel by Patrick Chiles opens in this setting. Marshall Hunter, a new graduate of the Space Force Academy, wants a piece of that action. He wants to explore space.

Hunter’s dream is an assignment aboard the nuclear-powered Borman . He busted his final check flight on the first go-around. Although he passed it the second time around, he believes he is bound for a dead-end assignment due to the screw-up. His worst fears seem realized when he is given a headquarters posting.

Others are exploring and exploiting space. The Jiangs are on their way to an asteroid in a first-ever attempt to capture one for mining. They are a billionaire husband-and-wife team, naturalized US citizens; refugees from Communist China. Nicholas Lesko is headed towards geostationary orbit as part of a different sort of mining expedition, one sponsored by organized crime. And Communist China has a mysterious manned fueling depot at L2.

Against expectations Hunter finds himself assigned to Borman. It is routine space travel between Earth and the Moon. While not the deep space assignment Hunter dreams of, it is space. Routine soon changes when things start popping in space.

A massive solar flare creates an orbital emergency, zapping orbing satellites and sending Borman on a rescue mission at geostationary orbit. Next, Earth loses contact with the Jiangs soon after they reach their asteroid. Something deflects their spacecraft to a Mars-collision course. BormanI , sent to rescue them gets mysteriously disabled. The Chinese “fueling station” proves to be a spaceship which claims it plans to “rescue” Borman . The price of rescue includes ceding Borman .

Frontier has it all: adventures in orbital and deep space, even a space battle. Chiles gets the science right. Better still he gets it right without getting in the way of an exciting story. He posits a future where humans venture into space for rational purposes, not just because it is there. Fans of Jerry Pournelle’s or Robert Heinlein’s science fiction will want to read Chiles. He brings the golden age of science fiction into the present – updating it better than ever.

Mark Lardas, an engineer, freelance writer, historian, and model-maker, lives in League City. His website is marklardas.com . This review appeared in a different form in the November 2021 American Essence magazine.