The Little Ship That Did

By the 1820s the transatlantic slave trade was largely outlawed. Great Britain and the US were early adaptors of its abolition. France and Spain were still winking at it (largely to twit Britain). Brazil would not outlaw the trade until 1831. Regardless, transatlantic transportation of slaves illegally continued. 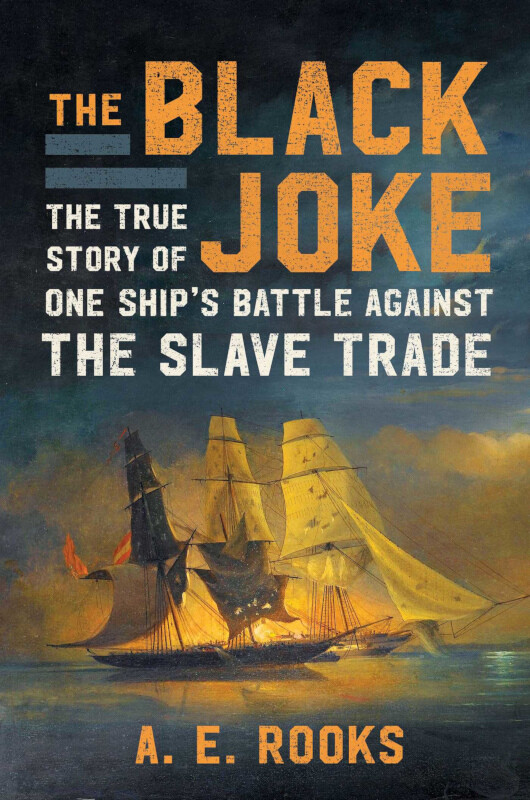 The Black Joke: The True Story of One Ship’s Battle Against the Slave Trade,” by A.E. Rooks tells of a ship instrumental in closing down this illegal traffic. Never a formally-commissioned warship in the Royal Navy, it was the vessel of Britain’s West Africa Squadron most feared by slave traders.

Rooks carries the story from Black Joke ’s incorporation into the Royal Navy in 1827 through its disposal a five years later. Its career was brief, but as Rooks shows, its impact was profound.

Launched as Henriquetta in Baltimore for the slave trade, it was captured in 1827 by HMS Sybille with an illegal cargo of nearly 600 slaves. Renamed Black Joke and taken into Royal Navy service as a tender to Sybille , it was manned from Sybille ’s crew and technically part of Sybille . It was armed with a single swivel gun, firing 18-pound shot, and had a crew of up to forty, including marines.

Rooks describes what came next. Black Joke became the terror of the Slave Coast of Africa, capturing or participating in the capture of fourteen slavers and freeing over 5700 slaves. It was the most successful anti-slavery vessel on the coast. It was so effective Black Joke was transferred to a different warship HMS Dryad when Sybille returned to Britain.

Rooks also picks through the legal complexities and cultural issues associated with Black Joke and fighting the slave trade. She explains how international law constrained fighting the slave trade. Britain was looking for ways to cut government spending during this period, which further affected efforts. Both were reasons why Black Joke remained a tender rather than an independent warship. It kept costs down and simplified legalities.

Rooks makes a few errors (Great Britain does not have a Royal Army), but they are minor. More jarring is her use of modern jargon. This language will make this book seem dated and quaint a century from now. So too is her attempt to impose twenty-first century values on the eighteenth and nineteenth century. Regardless “The Black Joke” is a classic study on the subject. which will almost certainly be read a century from now.

An excellent book about the Atlantic slave trade is “Black Cargoes: A History of the Atlantic Slave Trade, 1518 - 1865”, by Daniel P. Mannix & Malcom Cowley (1962). It is highly informative, well balanced, and old enough to be blessedly free of the Political Correctness which blights so much of more modern writing.

A side thought – 1518? The woman who made such a splash with her New York Times “1619” project seems to have forgotten the first 101 years of European Trans-Atlantic slave trading.

Another side thought – the word “slave” derives from the same root as Slav, because the ancestors of today’s Politically Correct Scandinavians would capture Slavic people in the forests of what is now Russia and use them as beast of burden to transport goods to Constantinople, where they would sell both the goods and the Slavs.

Last side thought – we have all heard about England’s South Sea Bubble of the early 1700s. Less well known is the business which offered such high profits as to attract all the speculators – the English South Sea company had obtained a contract to supply slaves to the Spanish Empire in the New World. Even less well known is that the great Sir Isaac Newton (1642 - 1727) was one of the many English speculators who lost a bundle in the South Sea Bubble. The past is indeed a different country.