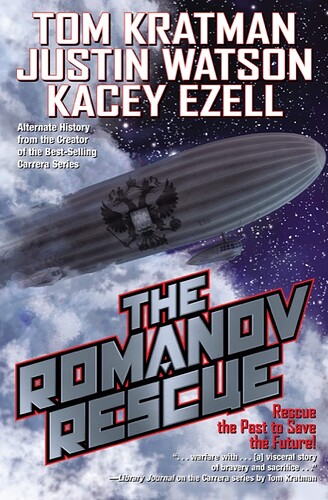 An Attempt to Rescue Tsar Nicholas

How would the world have changed had the Russian royal family not been murdered in 1918? Especially had they escaped Bolshevik captivity to serve as a focus for an anticommunist movement?

“The Romanov Rescue,” by Tom Kratman, Justin Watson, and Kacey Ezell, explores that possibility. It is an alternate-history novel, in which an attempt to rescue the Romanovs is mounted.

The authors posit a scenario where Kaiser Wilhelm decides to back an effort to rescue cousin Nicky and his family from the Bolsheviks. He sets in motion a mission to free the Russian Royal Family in December 1917.

It poses little risk to Germany’s war efforts. There is a cease-fire on the Russian Front and the Bolsheviks are negotiating a peace. The trick is disassociating Germany from the attempt. That is simple. Use pro-monarchist Russians. There were plenty of these scattered in POW camps around Germany.

Guards Captain Daniil Edvardovich Kostyshakov, held prisoner at Ingolstadt (sharing a room with Charles de Gaulle) is recruited to lead the effort. Why not? It is his ticket out of a POW camp, and he has an opportunity to serve Mother Russia by liberating the Tsar. He is allowed to pick a commando force to conduct the rescue from other prison camps, carefully selecting men believed to be monarchists.

The Germans are generous in their support for the rescue mission. They can afford to be. They outfit the raiders from stocks of captured Russian weapons and give them time to train. Transportation to Toblosk, where the Royal Family is being held is also provided. A Zeppelin, originally intended for a cancelled supply mission to German East Africa is available to carry the Russians to Toblosk.

It seems simple. Of course no plan survives contact with the enemy. This one is no exception.

This is not really a science fiction novel, even as alt history. It is a thriller in the style of E. Phillip Oppenheim, an author during the period in which “The Romanov Rescue” is set. That does not mean it is bad. Rather the opposite. Oppenheim was that period’s equivalent of Tom Clancy. Just like an Oppenheim thriller this book is jam-packed with non-stop adventure, numerous addictive subplots and a worthwhile romantic thread or two.

“The Romanov Rescue” is an improbable adventure. Regardless, it is a lot of fun to read. What more can be asked from this type of fiction? The authors deliver outstanding entertainment.

Oh no! Another new book!

Thank you, Seawriter. Based on your review, I ordered a copy and found myself reading it voraciously – while studying an atlas to refresh my knowledge of Eastern Europe and Western Siberia. It is a great – albeit at times disturbing – story!

The plot is a refreshing reminder of the vast amount of preparation and training an imagined exercise like this would require – and of the reality that plans will go awry in multiple ways, as well as the potential for unexpected positives to happen. The well-constructed plot kept on surprising me, right up to the end. Definitely a worthwhile read!