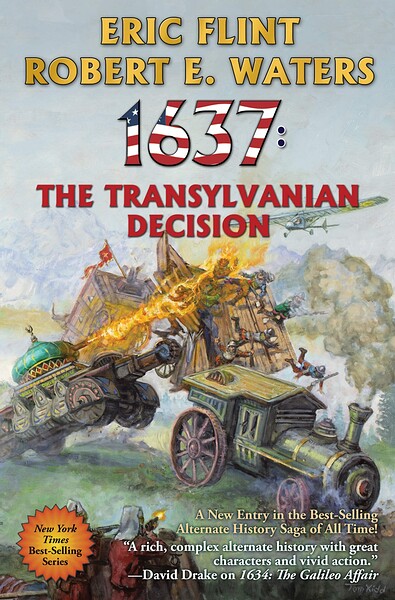 The Transylvanian Decision1052×1600 450 KB
Looking for a good read? Here is a recommendation. I have an unusual approach to reviewing books. I review books I feel merit a review. Each review is an opportunity to recommend a book. If I do not think a book is worth reading, I find another book to review. You do not have to agree with everything every author has written (I do not), but the fiction I review is entertaining (and often thought-provoking) and the non-fiction contain ideas worth reading.

Ring of Fire In Transylvania

In 2001 Eric Flint wrote a one-off novel titled “1632,” featuring a West Virginia town transposed in time and space to Thirty Years War Germany. It spawned numerous sequels, resulting in multiple series captured under the Ring of Fire umbrella. It even gave birth to a new publishing house focused on these stories.

“1637: The Transylvanian Decision,” by Eric Flint and Robert E. Waters, is the latest book in the series. It is also the last book written by Flint. He died in July 2022.

Over six years since the Ring of Fire, up-timer Morris Roth, transformed himself from Grantville jeweler too the commander of the Grand Army of the Sunrise, stationed in Bohemia. Roth, who is Jewish, created the army to prevent the 1648 Chmielnicki Pogrom. He is trying to carve out a Jewish homeland in territories east of Bohemia, in what in the future became Russia’s Pale of Settlement.

He is offered an alliance with Transylvania, then an Ottoman client state. Transylvania wants independence and is willing to aid Roth’s move into Ruthenia in exchange for military assistance against the Ottomans. After the United States of Europe offers to assist Roth and his army, Roth agrees to the alliance. A Transylvanian campaign will aid the USE, fighting the Ottomans in Austria.

The Army of the Sunrise is made up of Jewish infantry, the Bohemian Brethren (a Protestant sect evolved from the Hussites) and mercenary cavalry. The Brethren have armored wagons and locomotives. For the campaign it is being reinforced by a brigade of the Silesian Guard, commanded by Jeff Higgins and Sons of Liberty political organizers led by Gretchen Higgins, Jeff’s formidable spouse.

Against that the Ottoman Caliph is using vassals from Wallachia and Moldavia to put down the Transylvanian uprising, reinforcing them with Ottoman-built tanks (steam-powered and armed with flamethrowers), an Ottoman zeppelin, and Janissaries. The results will be bloody.

This book follows one of several side threads that branched off from the main story, which Flint tended to write solo. However, this thread was one close to Flint’s heart, one he created in the first Ring of Fire short story collection. Despite a co-author, it reads in many ways like one of his main line novels.

“1637: The Transylvanian Decision” offers what readers of the series expect; action mixed with technology, and the appearance of many familiar characters. It is a worthy addition to the series.

Wow, what a great premise!

I have often asserted that the critical omission in the Treaty of Westphalia (due to a similar omission in the Treaty of Augsburg), was inadequate material support for Cuius regio, eius religio. That omission most-contributed to the decline of the West’s notion of the “nation state” established by that Treaty. A quasi-Zionist army attempting to carve out a “regio” for assortative migration to their “religio” in the future Pale of Settlement anticipates The Transfer Agreement between the Nazis and Zionists. That Agreement, too, had inadequate material support. The result was WW II and, one might argue, the decline of the West now upon us. The emerging threat of a rhyme with The Thirty Years War is, by obvious analogy, what Flint is aiming at by connecting pre-revolutionary War US to the Thirty Years War.

While I’m impressed by Flint’s insight in choosing his premise, and I will almost certainly get around to reading this book, if not the entire series, I am almost certain he did not focus on the failure of the Treaty of Augsburg to include in Cuius regio, eius religio a provision for reallocation of territory based on its assortative migrations.

If I were to write such a series, it would culminate in the run-up to the US Civil War and Lincoln replacing the Emancipation Proclamation, 13th Amendment and 14 Amendment with a simple change to the US Constitution providing Cuius regio, eius religio with adequate material support: