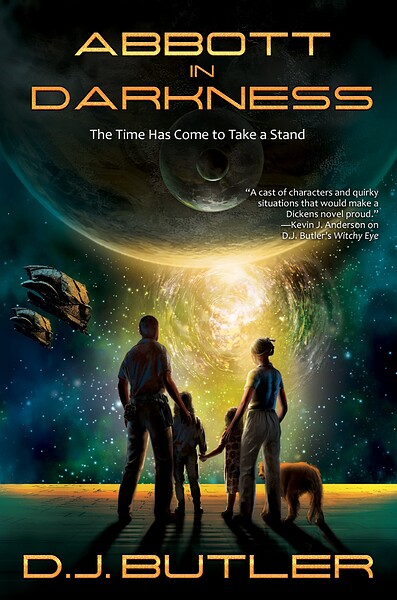 Abbot in Darkness1457×2200 267 KB
Looking for a good read? Here is a recommendation. I have an unusual approach to reviewing books. I review books I feel merit a review. Each review is an opportunity to recommend a book. If I do not think a book is worth reading, I find another book to review. You do not have to agree with everything every author has written (I do not), but the fiction I review is entertaining (and often thought-provoking) and the non-fiction contain ideas worth reading.

The Wild West in Outer Space

John Abbott is the All-American boy of the future. He is scrupulously honest, yet ambitious, getting ahead on his abilities. An accountant, he is a family man, with a wife, two young daughters, a family dog and a mountain of student loan debt.

“Abbott in Darkness,” a science fiction novel by D. J. Butler follows Abbott and his family as John Abbott pursues a career to pay off his debts. He has taken a job with an American interstellar corporation, moving his family to a planet circling a remote star. The move offers an opportunity to get rich quickly.

The Sarovar star system where John has moved is a US territory. The Sarovar Company leases the system from the United States government. Think the Hudson Bay Company of North America’s early history or the Honorable East India Company of the seventeenth and eighteenth centuries. John’s job is with the Sarovar Company, as an accountant.

Sarovar Alpha, where John will be working is a source of valuable resources, especially Sarovani Weave. A silk-like cloth with remarkable properties, it is self-healing and strong as well as beautiful. It has industrial as well as esthetic uses, and it immensely valuable. It is produced by an indigenous, but primitive sentient species on Sarovar Alpha, the three-sided Weavers.

Upon arrival John discovers the job he was supposed to take is still filled. As a temporary assignment he is asked to go to remote Arrowhawk Station the heart of the Weave trade. On the surface he is supposed to fill an open auditor’s slot. In reality he is asked to secretly investigate irregularities there. Weave theft and smuggling is suspected by headquarters. As a sweetener, John can become a Weave trader, which will bring the wealth he desires.

John’s investigations soon bear fruit. Something is going on. It goes beyond simple commercial crime, however, involving weapons trading with the native species. John soon realizes senior company officials may be involved. Then the conspirators come after his family.

“Abbott in Darkness” takes readers on a first-rate adventure. It is a fast-paced story set on a frontier planet. John Abbott is an unlikely action hero. He suffers from Marfan’s Syndrome. He knows his limitations and stays within them. He strives to do the right thing, not the easy thing. Butler populates the book with likeably characters, plausible villains, and interesting aliens, wrapping everything in an exciting and interesting plot.