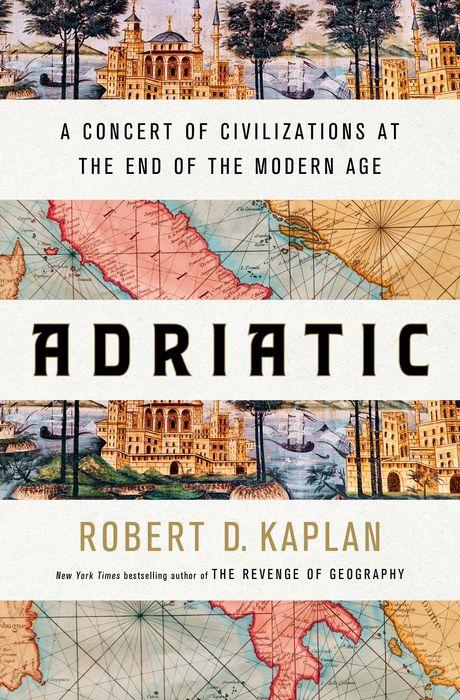 The Boundary Between East and West?

What is the dividing line between East and West? Where does the Western World end and the Orient begin?

“Adriatic: A Concert of Civilizations at the End of the Modern Age,” by Robert D. Kaplan, asserts the Adriatic Sea forms the dividing line. Kaplan explores the role played by the Adriatic from ancient times through the present day, examining its role as interface between east and west.

“Adriatic” is part travelogue, part history, and part personal reminisce. Starting in Rimini, Italy, Kaplan takes readers around the Adriatic, working his way around the coast to Corfu in Greece. He stops at Ravenna, Venice, Trieste, two cities in Slovenia, four cities in Croatia, two each in Montenegro and Albania, before arriving at Corfu.

At each city, he examines its history, culture, and place in the modern world. He looks at local architecture and art, consulting with several residents active in the local art and literary scene. This includes discussions of famous nineteenth and twentieth century western artists and authors who resided in those towns; Ezra Pound in Rapallo and Joyce in Trieste as examples.

In each chapter he reviews the history of each place he visits. He examines its place in ancient and medieval history, shows how the boundaries between east and west shifted, and the role each place played. He also examines its place in the modern world and its potential future. This includes an examination of the effects of the Balkan Wars of the 1990s, and the current state of each country and city visited.

It examines the role he expects each place will play in the near future. Kaplan believes China’s Belt and Road system will restore the Adriatic’s traditional role as conduit between East and West. Just as Venice brought Eastern goods to Western Europe through the Adriatic during medieval times, Chinese investments in northern Adriatic pots will restore it to that role in the present.

Kaplan is a globalist. He believes China will become an enduring superpower and Russia will be restored to its prior superpower status, leading to a multipolar world. These views infuse the book. It was researched prior to the Covid lockdowns, and the changes it brought about. His predictions of Chinese and Russian dominance and inevitable Western decline seem potentially anachronistic in view of 2022 events. Regardless, “Adriatic” is a fascinating read, for its tour of the bordering polities, if not its prophecies.

If I’m not mistaken, Kaplan has written a number of books, some on history, some evaluating military behavior by the US vs other countries. His first in these was, if I’m not mistaken, Imperial Grunts. He wanders about the world looking at SF and other SpecOps units and their missions and activities. One of his conclusions is that we’re much like the old Roman Empire - spread across more territory than we can control and so forced to use local augmenters to aid in the mission.

Strictly speaking you’re right - sort of. We certainly added Hawaii, the Philippines, Puerto Rico, and for a while Cuba.

In a different sense we are an empire in that we spread our “influence” across the globe, supporting those we agree with and countering those we don’t. So we (the CIA) overthrew the duly elected leader of Iran, of South Vietnam, and of (I think) Peru (one of those northern South American countries). The Bay of Pigs was not a friendly gesture. We currently assist the Colombians against the Shining Path and have provided support to other groups, or against other groups we were for or against. Indeed one can make a very rational argument that Europe does NOT defend itself because we were so dominant in NATO - how it acted, was armed, military doctrine, etc.

I think that’s what Kaplan argues - not that we are a territory-gobbling empire but a hegemon whose “edicts” must be carried out.

not that we are a territory-gobbling empire but a hegemon whose “edicts” must be carried out.

And that’s the point. If your edicts have to be carried out, because you have the economic and hand-behind-the-back military power to deter anybody who might contest them, then why would you want to gobble territory when you can collect rent (tribute) from them in the form of their selling you tangible goods for zero-cost-to-produce funny money, agree to implement your foreign policy by enforcing “sanctions” against those who oppose you, and either passively knuckle under or actively assist (“Five Eyes”) your global surveillance of every individual on the planet?

Controlling territory is expensive and saps resources needed to keep domestic troublemakers in line. Far better to make them clients, and then vassals through economic means.

By the evidence, the Chinese have figured this out (“Belt and Road”) and are doing it better than the legacy hegemons.

Controlling territory is expensive and saps resources needed to keep domestic troublemakers in line. Far better to make them clients, and then vassals through economic means.

I believe that is EXACTLY what Kaplan is driving at. Indeed, one of his points is that ALL “empires” eventually run out of resources to maintain themselves. Look at the USA. We have spent ourselves into an almost impossible hole.