This Week's Book Review - After the Romanovs 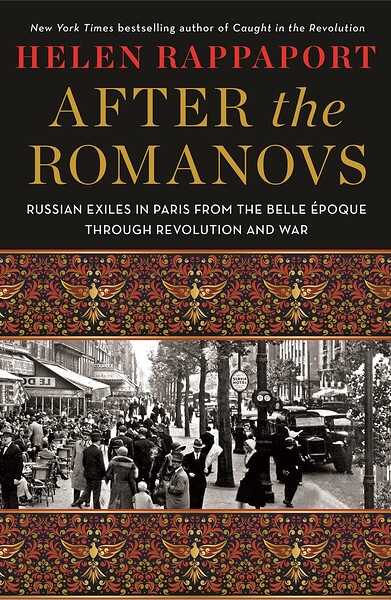 After the Romanovs900×1382 254 KB
Looking for a good read? Here is a recommendation. I have an unusual approach to reviewing books. I review books I feel merit a review. Each review is an opportunity to recommend a book. If I do not think a book is worth reading, I find another book to review. You do not have to agree with everything every author has written (I do not), but the fiction I review is entertaining (and often thought-provoking) and the non-fiction contain ideas worth reading.

“After the Romanovs: Russian Exiles in Paris from the Belle Epoque through revolution and war,” by Helen Rappaport, St. Martin’s Press, March , 2022, 336 pages.

Paris of the late nineteenth and early twentieth centuries was a second home to Russia’s nobility. Until the start of the First World War they retreated to Paris to have fun. Some liked it so much that until the war started they abandoned Russia almost entirely, remaining in Paris year-round.

“After the Romanovs: Russian Exiles in Paris from the Belle Epoque through revolution and war,” by Helen Rappaport, tells their story, following the Russians in France both before and after the Russian Revolution. It is a tale of the wheel of fortune taking those at the pinnacle of life to its nadir. The Revolution reduced Russian princes who lived in luxury to men driving taxis with their wives worked at\ fashion houses to make ends meet.

Rappaport emphasizes the before and after contrasts by opening the book during the Belle Epoque. She shows Russian aristocrats using Paris as a playground, with every want or need provided by their wealth. Republican Paris became a Russian colony, an escape from an uncultured Imperial Russia. One of Tsar Nicholas II’s brothers even moved to Paris, transferring his wealth there.

Then the Great War came, followed by the Russian Revolution. Rappaport shows how the Russian nobility, as brave and patriotic as they were indolent, rushed home to Mother Russia to defend her from Germany. Many carried their wealth home to help the state. Battlefield reverses led to military collapse followed by the Revolution. Bolshevik brutality forced aristocrats to flee or die.

Rappaport traces their lives in Revolutionary Russia. Many fled with just the clothes on their backs. Some carried jewels concealed in clothing, yet even these resources provided little relief. Jewelry prices plummeted due to diminished demand and increased supply.

Many retreated to France, where Rappaport explores their lives. Some thrived. Bunin, Chagall and Stravinsky experienced great success. Others struggled, eking out a precarious exile existence at menial jobs – if they found jobs. Most suffered homesickness, wishing to return home. Many believed their stay in France would be short. All expected Soviet Russia to collapse; some worked towards that goal. No one expected the collapse would not occur until 1991.

“After the Romanovs” is fascinating. Rappaport creates a series of finely detailed portraits of the Russian expatriates. She takes readers into their lives, showing how they carved out new lives in a strange land. It provides a moving account of a people displaced by Revolution.