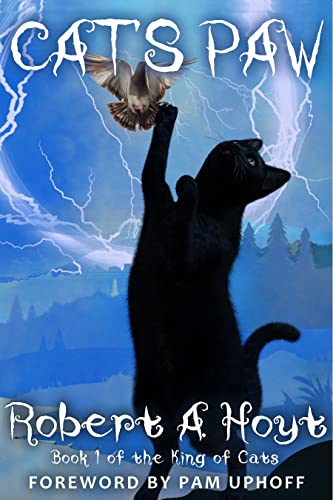 All Hail the King of Cats

“Cat’s Paw, A Novel of the King of Cats” a fantasy by Robert A. Hoyt, opens with as bird readies for its passage to the mountain at the end of the universe. Unless it is stopped, it will be the final passage. The universe will end.

Meanwhile, in Broxton, Colorado, Tom, an alcoholic alley cat, encounters a white Persian cat while scouting for pizza and beer in a pizzeria dumpster. She is female, which interests Tom, who . . . tomcats around. She also appears lost and pregnant, with a fancy collar that shows she is an indoor cat.

Fluffy, the white Persian turns out to be a cat with a mission. She needs to reach the mountains. The father of her kittens was slain by another cat. Before dying he told her to go a building in the mountains for her safety. His family would protect her.

Tom is a fighter, Broxton’s top cat. Against his inclinations Tom accompanies Fluffy. She is a ditz, whom Tom recognizes cannot survive long without help. En route, the pair gain an ally, a bookish, male library cat named Guinevere.

They need the extra paws. The way to the mountain proves perilous. They encounter crazed squirrels, malevolent prairie dogs and hostile snakes and eagles along the way. To say nothing of cat assassins who keep trying to kill them. They learn Fluffy is carrying the last of the Royal Line of Cats, dedicated to stopping the bird. A cult of cats intent on seeing the universe end killed off the Royal Line, and is occupying the passage to the mountain at the end of the universe.

“Cat’s Paw” turns out to be a heroic epic, with anthropomorphic animals playing the valiant knights, fair damsels, and evil magicians. Tom is Dumas’s Athos in feline form. Eye, the leader of the doomsday cult, proves to be the cat analog to Saruman.

Hoyt makes it all work. Despite the improbable setting of an epic fantasy, readers get drawn in. By the time it ends, you believe the fate of the universe can be determined by cats. “Cat’s Paw” Is entertaining, captivating, and exciting.