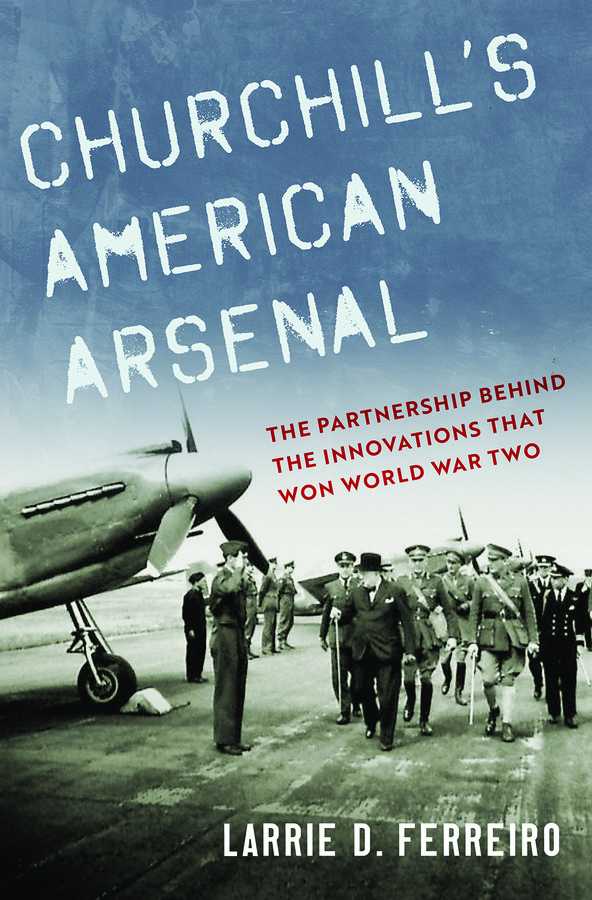 Many nations have created military alliances over the centuries. Few have gone beyond coordination of military activities. Yet in World War II the United States and Great Britain forged a collaborative association virtually unique in history. It led Winston Churchill, in his post-war Iron Curtain speech to speak of a special relation between the two nations.

“Churchill’s American Arsenal: The Partnership Behind the Innovations that Won World War Two,” by Larrie D. Ferreiro, examines that alliance and the fruits that emerged from it, including victory.

Ferreiro shows it could have gone differently. His opening chapter shows the rivalries and jealousies that existed between the two nations in the years leading up to World War I and between the two world wars. Both nations suspected the motives of the other. He also shows how an accommodation formed due to the threat posed by Hitler, and examines the results of that partnership.

He shows that many iconic World War II weapons resulted from Anglo-American technical collaboration. The P-51 Mustang fighter was built in the US to an Air Ministry specification. The Liberty Ship was designed in Britain and mass-produced in the US. The Mustang was particularly a joint effort. Designed by a US manufacturer it was accepted by the British after the US Army Air Force initially rejected it. Then, as a result of flight trials it was re-engined with a licensed Packard version of the Roll-Royce Merlin to become the AAF’s premier fighter.

The two nations collaborated closely on virtually every important war-winning technology: radar, code-breaking, operations research, battlefield medicine (including penicillin), armor systems, the proximity fuse, and even the atomic bomb. Even weapons systems foreign to both nations, such as Sweden’s 40mm Bofors and a Switzerland’s 20mm Oerlikon antiaircraft guns passed into Allied hands as a result of Anglo-US cooperation.

He also demonstrates how the partnership worked both ways. Although the US dominated in manufacturing capabilities, both sides contributed technology used by the other. Without this close partnership, things would have gone much differently. Many names that were scientific and engineering pioneers in the postwar world make appearances in this book. This includes William Shockley, James Van Allen, Isador Rabi, Luis Alverez, and Gerald Kuiper.

“Churchill’s American Arsenal” is one of those rare and delightful books that reveals unexpected connections. It shows an unexpected side to industrial history of the World War II story, and how it affects technology growth even today.

I feel superfluous saying just this, but…wow. Shall order via my local bookseller. Thank you.

I’m a bit skeptical. England has long been the world’s premier pirate nation. While I am sure there were some contributions by the Brits, notice that many things “English” in WWII were, in fact, the ex-pat responses of other nations to the Germans. Yes, we supplied technology to them, but we also supplied weapons - not just war weaponry but regular, personal firearms. England has “disarmed” TWICE in recent history - before WWII and currently. The WWII populace disarmament led to large numbers of Americans donating their firearmss to England to arm its citizens for the expected invasion of Germany. The current disarmament is still playing out but to date it appears to again be a bad decision.

Plus there is the totally illegal North Atlantic War FDR waged for over a year ferrying supplies to England against our “neutral” status. We lost one can to German U-boats and I’m rather surprised it wasn’t more, although the U-boats, unlike the Luftwaffe, was much more disciplined about what the important targets were. Lastly there is the vast industrial strength we gave England. They would never have been able to produce the amount of materiel needed for the first of ”modern wars”. Israel demonstrated quite vividly what it took to run a modern war in the 6-Day War. It was 6 days because Israel was running out of supplies in such a short time to keep up the intensity of combat necessary for much longer. Damascus was well in reach, but supplies weren’t, so Russia’s threat was a good excuse to stop.

I am not sure what you are skeptical about. British disarmament and Roosevelt’s actions pre-war are either not relevant to the story told by this book or peripheral to it.

The book acknowledges the industrial strength of the US. There were things the US invented first. (Goddard and the liquid fueled rocket and Draper’s gunsight among others.) But the book shows a host of things produced in the US were invented in Britain: the cavity magnetron, penicillin, modern operations research, and many more. Plus (as mentioned in the review) designs like the P-51 and Liberty Ship. But also the LST. Yet as Ferreiro shows, it was the fusion of the two nations’ R&D that yielded the biggest payout.

I am skeptical of the actual British component here. Like so many things, England likes to take credit where ever it can get away with it.

The P-51 was hardly “designed” by the Brits; their contribution was the RR Merlin engine, which was, indeed, exceptional. The rest of the P-51 was designed in and by America. My understanding of the Liberty ship is similar; there may have been some input from Brits, but I’m sceptical they “designed” the ship. Recollect the ships had a fatal flow causing many to break up in the middle. That was fixed by Americans adding length spars to strengthen the midsection yet add little to the time to build.

Douglas Bader was an honest-to-goodness ace, but his squadron were Canadians. He developed his 4-plane fighter formation concept, but Americans pushed it to its really deadly two-plane furball concept and overall aggressive fighter pilot tactic. The Tuskegee Airmen brought bomber protection into the aviation world.

We have England and Churchill to thank for Russia’s rise and communism’s dominance in Eastern Europe. HE turned aid AWAY from natural allies of the West and TO communist groups who might well have been killed off without this move.

The disarmament issue is simply yet another little tidbit that appears to be missing from the narrative. Certainly the illegal North Atlantic War ought to be put forth, as it showed just how tenuous England’s existence was AND what all WE did to keep them alive - and all illegally! This was not Brits sailing Lend Lease ships but American Navy ships, manned by Americans, doing convoy duty across the Atlantic.

We have England and Churchill to thank for Russia’s rise and communism’s dominance in Eastern Europe.

It is like any analysis of a disaster – an improbably large number of things had to go wrong in sequence in order to create such a mess.

Yes, Churchill’s modern reputation has been burnished beyond the point of reasonableness – but first other English politicians had to set the stage for disaster by declaring war on Germany. It is often forgotten that the war in the West was triggered by England & France.

And that would not have happened without the disastrous Versailles Treaty, for which France and Woodrow Wilson have to take much of the blame. If Wilson had not duplicitously got the US to enter World War I on the side of the colonial imperialists, Europeans would almost certainly have fought to a standstill and ended the war with a much more reasonable negotiated peace treaty.

Yet it could be argued that Wilson was merely extending what Lincoln had done at the time of the Civil War, transforming the American Republic of Individual States into something quite different – effectively a single polity ruled from the DC Swamp.

Plenty of blame to go round!

You are looking at the longer term picture. I am attempting to limit myself to issues during WWII. While England may have been the staging area for war against Europe, IT was hardly the source of victory there. The concept that Brits actually designed various important parts involved in the war is laughable. Mostly they collected governments-in-exile and milked the talent there - to claim the victory. So code breaking was mostly Polish mathematicians working in England. Enigma was NOT “broken” by Brits but by Polish. The Battle of Britain was won not by Brits mostly but by Canadians, Australians, Americans - and the whole American idea of an 8-gun fighter - first seen as the Hawker Hurricane and later Spitfire. Hurricanes wrought havoc in the Stuka and Heinkel-111 ranks. Americans developed the “Red Ball Express” resupply system that allowed Patton to run wild in the German lines. Americans developed the air-ground concept of counter-battery fire such that a German 88 unit would deploy, fire one to two quick salvoes, then beat feet OR they would be blown to bits by P-47 sent specifically to kill them. Amphibious landings were an American concept, run by American landing craft built on Lake Ponchetrain. Hedgerow busting was created by an American sergeant from NJ who noted the layout AND problem of hedgerows and proceeded to weld push-bars to the front of a Sherman and punch holes in the hedgerow and engage the German troops, flushing them out to be wiped up by the infantry.

So yes, Lloyd George and the French screwed up royally in WWI, with the active help of the perfidious W. Wilson, and the lowlife FDR got us into an European land war no one in America but he and the Progressives wanted. But England’s, and by extension Churchill’s, contribution to WWII was far more negative than positive. If nothing else had Eisenhower been a better general than clerk, he would have kicked Monty down the stairs and let Patton run rampant in the German lines. We would then most likely NOT have fought in the Ardennes, crossed the Rhine WAY earlier, probably taken ALL of Germany WAY before the Russians ”arrived”.

So, yes, I am skeptical - for lack of. word acceptable in mixed company.