This Week's Book Review - Cowboys and Indian: A Doctor’s First Year in Texas 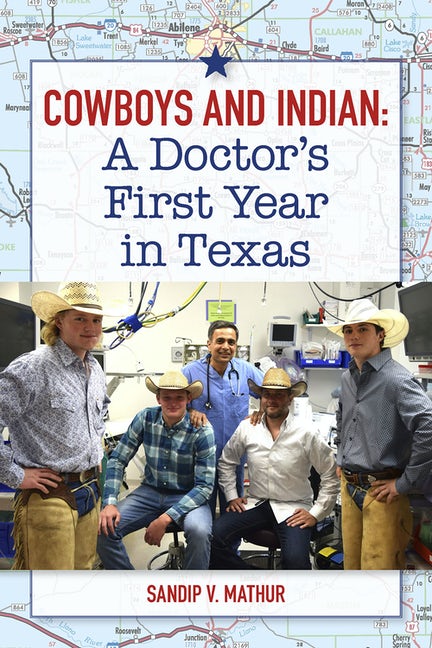 Not Your Typical Texas Western

Sandip Mathur was born in India. He became a doctor there with specialist training in London, England and Houston, Texas. In Houston, he and his wife realized they loved Texas. They wanted to stay. He needed Permanent Resident Card, the green card permitting an alien to legally remain and work in the United States. To get one he agreed to practice medicine three years in an underserved rural community.

“Cowboys and Indian: A Doctor’s First Year in Texas,” by Sandip V. Mathur, tells the story of his experiences. He, his wife and his two daughters ended up in a small West Texas town, two hours from Abeline, Texas.

The book follows his first year of practice at Hotspur (the fictional name Mathur gives the county where he moved). The experience defined culture shock. The Mathurs had always lived in cities with populations over one million people. Hotspur had less than 10,000 people in a 5000 square mile area. They were Hindi in a deeply Christian town. They were traveled. Most in Hotspur thought Dallas was a long journey.

Ultimately these differences mattered little. The Mathurs’ loved Texas’s heat. Texans reminded them of the Punjabi people where they grew up. Both could be rough, but both were straight, decent, and told it like it was. Color did not much matter in 1990s Hotspur or for the Mathurs. As for religion? Hotspur residents believed if you had love in your heart you had Jesus in your heart. Mathur accepted that attitude in the spirit it was offered.

Hotspur badly needed a doctor. Doctors applying to locations like Hotspur often had checkered pasts. Learning Mathur was there for three years to get a green card – and not because he was alcoholic or a pervert – was a relief. Color and religion mattered a lot less than competence. Mathur learned that his first full day at his new clinic. A man attacked by bees arrived with Adult Respiratory Distress Syndrome from his allergic reaction. The other two doctors were out of town for the weekend. Mathur mastered the crisis, saving the man’s life.

“Cowboys and Indian” shows Hotspur and the Mathurs adjusting to each other. It has the magic of James Herriot’s “All Creatures Great and Small,” with West Texas substituted for Yorkshire and general practice for veterinary medicine. There is the same humor, life-and-death crises, and love for the country life. It is inspirational and endearing.

Mark Lardas, an engineer, freelance writer, historian, and model-maker, lives in League City. His website is marklardas.com . This review appeared in a different form in the December 2021 American Essence magazine.