This Week's Book Review - Death of a Scholar 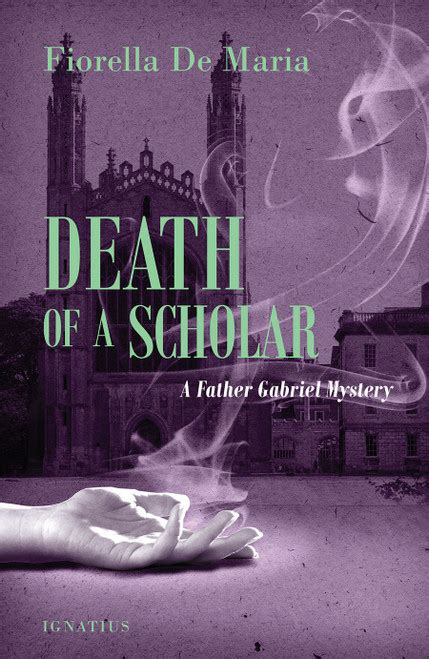 A Past that Poisons the Present

“Death of a Scholar: A Father Gabriel Mystery,” by Fiorella De Maria, the fourth mystery in the Father Gabriel series, returns Father Gabriel to Cambridge. The series is set in post-World War II England. Father Gabriel is visiting an old friend, Arthur Kingsley. A secondary goal is to face the ghosts of his past, in the form of his late wife’s family.

Gabriel and Kingsley became friends when they attended Cambridge together following World War I. After a few years in the chemical industry on the Continent between the two World Wars, Kingsley returned to Cambridge, where he is now a senior fellow at the fictional St. Stephen’s College. It is the first time the two have been together in many years.

The reunion is disturbed when Kingsley’s protégés, Daphne Silverton, a brilliant chemistry student, is found dead in her laboratory in the morning following Gabriel’s first dinner at his old college. She had been in attendance at the dinner. Her death seems a tragic accident, but Gabriel suspects she may have been murdered.

His investigation is postponed until after a meeting and reconciliation with Gabriel’s in-laws. He has blamed himself for her death, although in reality there was nothing he could do to prevent it. His in-laws understood both his feelings and that he was not at fault, and help him work past his guilt,

The death of a second member of Daphne’s laboratory leads Gabriel to redouble his investigation. Some clues are tantalizingly technical, buried in the minutia of chemistry. Others go to personal histories and motives. This includes Britain’s postwar Peace Union and the Ban the Bomb movement then active in Britain’s universities.

Gabriel finally finds the solution to the murders in prewar and World War II activities of the participants, both the initial victim and the individual ultimately revealed as the perpetrator of the crimes. A desire for vengeance and the need to hide guilt combine to yield a fatal reaction.

“Death of a Scholar,” like all Father Gabriel mysteries, goes beyond the simple who dunnit format. It explores issues of morality; in this case, the ethical consequences of scientific research when applied to immoral uses. It is both a well-crafted mystery, and a study of ethics and responsibility.