This Week's Book Review - Destruction of the Steamboat Sultana 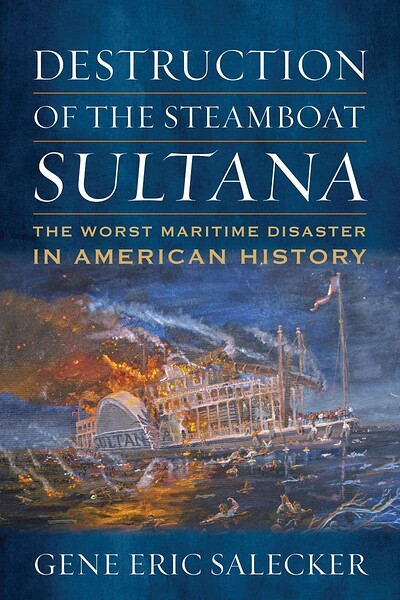 Destruction of the Steamboat Sultana800×1200 133 KB
Looking for a good read? Here is a recommendation. I have an unusual approach to reviewing books. I review books I feel merit a review. Each review is an opportunity to recommend a book. If I do not think a book is worth reading, I find another book to review. You do not have to agree with everything every author has written (I do not), but the fiction I review is entertaining (and often thought-provoking) and the non-fiction contain ideas worth reading.

Death on the Mississippi

In April 1865 the steamboat Sultana’s boilers burst shortly after passing Memphis on its way to Cairo, Illinois. The boat burned and sank. Aboard were nearly 2200 passenger and crew. Of those aboard, 1168 died. It was the deadliest maritime disaster in the United States. Not until Titanic sank in 1912 would another maritime disaster exceed Sultana’s death toll.

“Destruction of the Steamboat Sultana: The Worst Maritime Disaster in American History,” by Gene Eric Salecker, is a new book about the steamboat’s loss. Salecker, acknowledged as one of the two foremost authorities about the steamboat’s history took a fresh look at the disaster starting in 2015. This book is the result. It is the most authoritative look at the event written to date.

Salecker has been studying Sultana for over 30 years. He collaborated closely with the other acknowledge authority on Sultana, Jerry O. Potter, during that time. This book is the product of seven years of fresh research, with Salecker revisiting archives and reexamining court-martials records, official investigations, and personal recollections of the event.

The result is a fascinating and detailed account of what happened. He follows the history of the boat, exploring what caused the boiler explosion. He also examines what caused a boat that should have been carrying no more than 600 passengers to be overloaded with three times that many. They were paroled Union prisoners-of-war, being repatriated North. Instead of being split among three available boats they were all loaded into Sultana as part of a corrupt deal between Sultana’s captain and the quartermaster officer loading prisoners. Salecker showed how the subsequent investigation convicted a totally innocent officer who attempted to prevent the overloading .

Salecker strips away many myths about the disaster. Besides showing the innocence of the tragedy’s traditional villain he identifies the true guilty parties, showing how they evaded responsibility. He definitively debunks the claim Sultana was sabotaged. He also pinpoints actual casualty totals, correcting exaggerated claims of deaths.

Despite Salecker’s attention to detail and obsessive pursuit of the facts, this is not a dry book. It reads like a cross between an adventure novel and a mystery. He captures the human drama behind the tragedy. Whether this is your first introduction to the Sultana disaster or you have followed it for years, this book is worth reading. It may not be the last word on the story, but it is an important one.

(If you have any appreciation for the destruction ice wreaks upon containers, then amplify that by a “zillion” and take the timeline down to milliseconds.)

On this note, I found this film (or the associated book by Walter Lord) to provide very insightful portrayals of the decision-making and the management culture on Titanic: 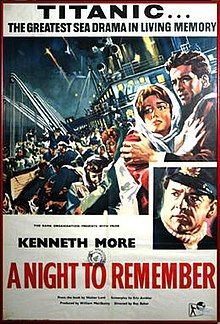 A Night to Remember is a 1958 British docudrama film based on the eponymous 1955 book by Walter Lord. The film and book recount the final night of RMS Titanic, which on her maiden voyage from Southampton to New York City struck an iceberg in the North Atlantic and then sank in the early morning hours of Monday, 15 April 1912. Adapted by Eric Ambler and directed by Roy Ward Baker, the film stars Kenneth More as the ship's Second Officer Charles Lightoller and features Michael Goodliffe, Laurenc...

In particular, this was notable: 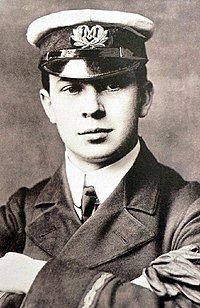 In March 1912, Phillips was sent to Belfast, Ireland, to be the senior wireless operator on board Titanic for her maiden voyage. He was joined by junior wireless operator Harold Bride. Stories have appeared that Phillips knew Bride before Titanic, but Bride insisted they had never met before Belfast. Titanic sailed for New York City, United States, from Southampton, England, on 10 April 1912, and during the voyage Phillips and Bride transmitted passengers' personal messages and received ice On th...

Fascinating! I had never heard of this incident, and as a casual observer have to ask the obvious question – Why was the death toll so high? The Mississippi is a river, river banks are not far away; paroled soldier passengers would presumably be fit enough to jump off & swim to those banks. I will need to add this book to my growing pile of Must Reads – thanks for the recommendation!

As for the failure of the authorities to convict the right person, nothing seems to change. Look at the US Navy’s failure to hold anyone responsible for the 2020 loss of the $Billion USS Bonhomme Richard while tied up to a pier in San Diego.

Fascinating! I had never heard of this incident, and as a casual observer have to ask the obvious question – Why was the death toll so high? The Mississippi is a river, river banks are not far away; paroled soldier passengers would presumably be fit enough to jump off & swim to those banks.

A few reasons. The most important was that most of the soldiers aboard were ex POWs, including many from Andersonville. So they were in poor shape, half-starved and ill. A number were close to the boilers when they exploded, and were scalded or burned. The water was extremely cold. The river was in flood due to winter snow melt. Finally, a number of passengers could not swim. It was not as common in the middle of the 19th century.

“Destruction of the Steamboat Sultana” is indeed a very interesting book. Well worth reading. Thank you for the recommendation, Mr. Lardas.

It is fascinating for the reader to consider how random factors can make a huge difference in outcomes. Apparently, steamboat fires and explosions were not uncommon in those days. Normal procedure was for the pilot of a steamboat in distress to steer onto the riverbank, allowing most of the passengers to escape. But in the case of the Sultana, the explosion blew off the pilot & the pilot house, leaving the vessel unable to be steered.

On the other hand, the fact that the explosion occurred only about 10 miles upriver from Memphis TN meant that rescuers were on scene more rapidly. And the fact that Memphis had several hospitals set up to handle the injured from Civil War battles probably did much to save the lives of people pulled out of the river.

One of the fascinating by-ways in this book is the discussion of the “Courtenay Coal Torpedo” – yet another one of those devices unknown to most of us. A Confederate, Thomas Courtenay, had devised this bomb made out of rough metal disguised to look like coal and stuffed with explosives, with the intent that it would be mixed with coal in a steamboat’s bunkers and shoveled into the furnace. It took some investigation for the authorities to dismiss the possibility that the Sultana might have been the victim of such a device.

Let me climb on my soapbox for a moment: Where are the editors? About 26 years ago, the author had written a book on this disaster, and clearly intended this current volume to be the definitive & comprehensive account of the event & its aftermath. In that he succeeded – except for one issue. Any editor would immediately have realized that understanding of the events by anyone less familiar with steamboats than the author would have been vastly improved by inclusion of some diagrams of the layout of the Sultana and of its boilers. The lack of such diagrams is my only regret about this book.