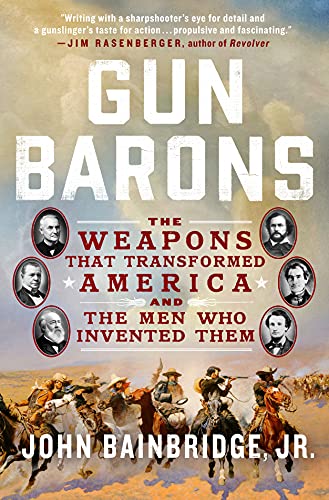 “They say God created all men, but Samuel Colt made them equal.” This saying originated in the American West, testimony to the impact repeating firearms had in nineteenth century America. Samuel Colt, known for the Colt revolver, may be the best known gun maker in the United States. In the nineteenth century, he was one among many firearms pioneers.

“Gun Barons: The Weapons That Transformed America and the Men Who Invented Them,” by John Bainbridge, Jr. tells the story of the men who brought repeating firearms to market, and the companies they started. They included Christian Sharps, Benjamin Henry, Oliver Winchester, Horace Smith and Daniel Wesson.

All founded companies to manufacture firearms. A few disappeared. Others, including Colt and Smith and Wesson, still exist. This book’s emphasis is on their histories during their birth century, the period between the late 1830s and 1898.

Bainbridge starts with the origin story; Samuel Colt’s 1836 patent for a “revolving gun.” He tells how Colt’s original company failed, and restored when the Texas Rangers purchased 1000 copies of a Colt design – the Walker Colt – for use in the Mexican-American War. Their use by the Rangers fueled the Colt’s popularity.

Yet, Bainbridge shows, Colt was merely the first man to bring the gun to market. Other players recognized the potential of these firearms and brought out their own designs. Bainbridge discusses these early entrants into the field. He presents the designs they brought out, and the patent battles fought during the 1840s and 1850s.

He traces the lives of the major players. Gunsmith Horace Smith started out working for Allen & Thurber. They had their own repeating design, one involving rotating multiple barrels. Smith went on to team up with Daniel Wesson. They hired Oliver Winchester, who started his own company in the 1850s. He, in turn, hired Benjamin Henry, who developed the Henry rifle. Meanwhile Christian Sharps started a company using a rifle of his own independent design.

Although the companies struggled during the 1850s, the American Civil War supercharged demand. Soon, what had started out as small-scale manufacturing grew into a major industry, one whose growth continued after the Civil War ended. Demand in the American West and worldwide drove production.

“Gun Barons” provides an interesting and accurate history of the firearms industry and the eccentric, colorful men who founded it. While a history of technology, it is also a story about individuals.

Interesting book it seems. I would argue that Sam Colt made it via Walker, the 2nd in command of the then Texas Rangers, whose primary purpose was fighting Commanches. That they then went on to be a primier cavalry in the Mexican-American war only aided Colt’s reputation. But the Rangers initially acquired 100 Colt Patterson pistols, his first attempt (and not an altogether great one) at creating a revolving pistol. They only got the Pattersons because their leader happen to notice that the Texas Navy, for some unknown reason, had acquired them, and he got them from the Texas Navy. The Commanche, needless to say, were very surprised with this development, being accustomed to the Rangers expending their rifles, then two pistols, and the rest of the fight being more or less hand-to-hand.

The Gospel of John Browning, as read by Ian McCollum: 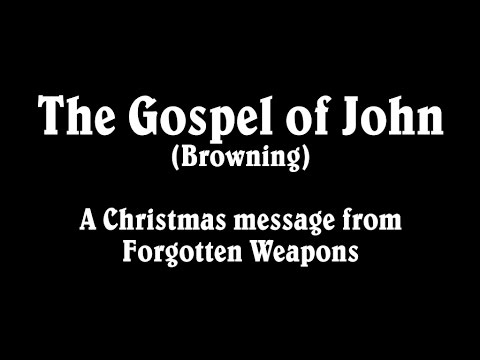