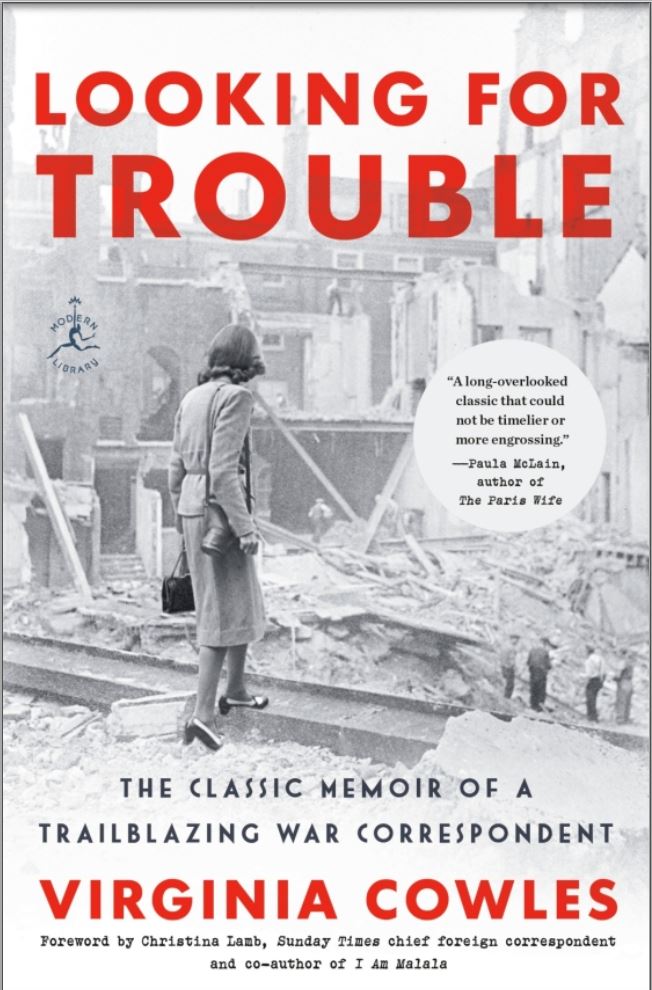 In 1935 socialite Virginia Coles was a society-girl columnist for toney magazines like Harper’s Bazzar, writing about fashion and gossip. She traveled the world writing light pieces about the places visited. Then in Italy she encountered Mussolini and his fascists and her career took a different turn. She became a war correspondent.

“Looking for Trouble: The Classic Memoir of a Trailblazing War Correspondent,” by Virginia Cowles tells that story. It is her memoirs during the period 1936 through 1941, collected from the columns she wrote for various US magazines over that period.

During that period she was everywhere. She covered the Spanish Civil War, her first attempt at being a war correspondent. She was the only correspondent to report from both sides of the conflict, visiting both Republican and Nationalist Spain during the struggle. It proved addictive. From there she went on to cover events in Europe as the continent slid into World War II.

She was a witness to the betrayal of Czechoslovakia. She spent time in England and Germany as the Czech crisis boiled up. She visited Czechoslovakia and the Sudetenland in anticipation of witnessing the start of a German invasion. Then she visited Munich during the run-up to the Munich Agreement where Britain and France gave the Sudetenland to Germany.

She visited Russia between the dissolution of Czechoslovakia and the invasion of Poland. She witnessed the beginning of World War II, going to Finland to cover the Winter War from the Finnish perspective. She was in France during its fall, and recounts her escape from Paris after the collapse of the French army. She then recounts her adventures in Britain after the fall of France, during the Battle of Britain and the Blitz.

The book was originally published late in 1941. It was a frank appeal to the United States to join the war against Hitler. Her experiences had turned her strongly anti-fascist and anti-communist. By then she was all-in for the British cause. (She would eventually marry an Englishman and settle in Britain.)

Cowles is gradually transformed from an almost-naïve socialite to a serious correspondent. Yet she never loses the personal touch, relating encounters with people as disparate as Mussolini, Churchill, Stalin, and Chamberlain, and people such as Unity Mitford. “Looking for Trouble” is a fascinating look at the world prior to and during the early years of World War II, and the people that shaped it.

Yet despite all her “experience” she never learned the central question for any nation - ?what is OUR national interest.

Yes, Mussolini and Hitler - AND Stalin, and probably even Churchill - were bad actors, but what was OUR national interest in yet ANOTHER European land war.

This is the unanswered question that has stymied our nation for the 90+ years since WWII, and probably since WWI.

This is the unanswered question that has stymied our nation for the 90+ years since WWII, and probably since WWI.

Definitely since WWI. At least in WWII, it was very clear that FDR wanted into the war to protect his favored communism in the USSR – although that was a leadership interest rather than a national interest. However, US involvement in WWI is very hard to explain. There were some Evil England incitements, such as the Lusitania and the Zimmerman telegram – but there was no real difference between British & French imperialists and German imperialists, from the perspective of the US national interest.

Still, when the Chinese, Indian, Brazilians look back at WWIII, they will be equally non-plussed about why the US & NATO chose to destroy themselves & Russia over a civil war in a very undemocratic & corrupt country that most of them could not find on a map.

However, US involvement in WWI is very hard to explain. There were some Evil England incitements, such as the Lusitania and the Zimmerman telegram – but there was no real difference between British & French imperialists and German imperialists, from the perspective of the US national interest.

I would submit WWI was just as easy to explain - Wilson. Recollect Wilson campaigned for his second term on keeping us OUT of the war, then as soon as elected he took us to war. And he was a Marxist too. The Lusitania was an excuse - Wilson, like FDR, had been “secretly” supporting England for some time

I would submit WWI was just as easy to explain - Wilson.

That is certainly a defensible hypothesis. Look at the implication – US citizens died in droves in the two “big” wars of the 20th Century because of personal interests of its leaders, not because of any US national interest that benefitted those citizens. That is very worrying in the 21st Century when the US is “led” by a sock puppet.