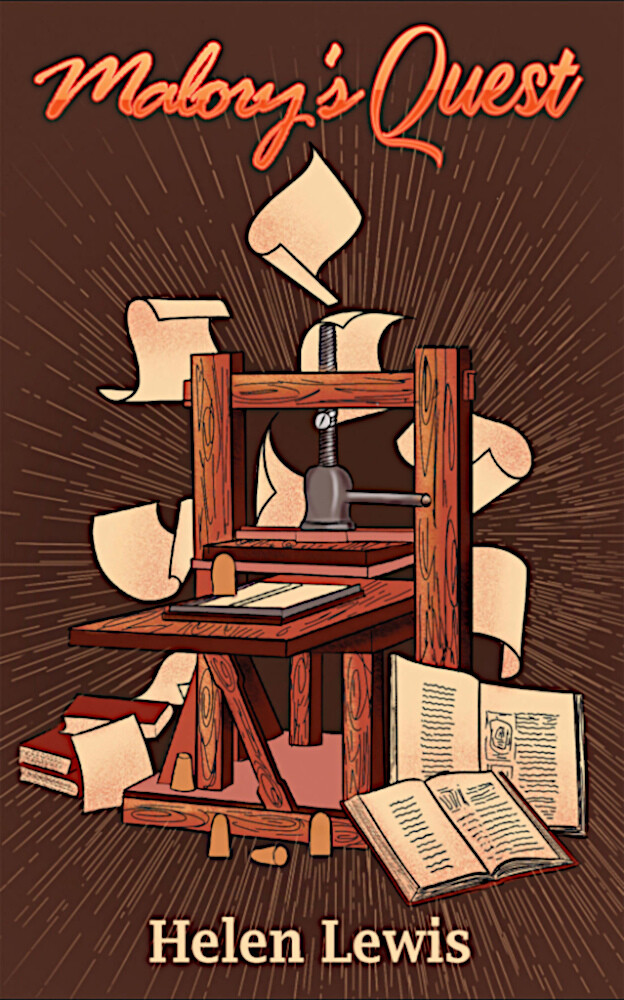 Sir Thomas Malory is dead. Anthony Tanner learns of his friend’s death when he arrives at Newgate Prison, where Malory had been imprisoned. Three of Malory’s friends and supporters need advice from Tanner on the handling of Malory’s life work, “L’Morte de Arthur.”

“Malory’s Quest, a novel by Helen Lewis, follows the adventures of Tanner, Malory’s men, and the fate of Malory’s manuscript. Set in the aftermath of the 1471 Battle of Barnet (where Tanner fought for the losing side), it shows them attempting to carry out Malory’s posthumous wishes for the disposal of the manuscript.

The Newgate Three, Malory’s scribe Monty Pickle, his stationer Jack Works, and his servant, John “Pom” Appleby, were charged with placing the manuscript in the archives of Westminster Abby. Being London born and bred, they have no idea how to get there. The well-travelled Tanner (a soldier and spy), advises them, intending to accompany them.

To compound their difficulties, unknown to them Peter Crosby wants to steal the manuscript. He believes fame, and perhaps a fortune, will be his if he can secure the manuscript and have it published under his own name. It is a foolish conceit, as “publishing” then involves hand-copying and there are no copyright laws, but he believes money is to be made.

As secretary to the Lord Chancellor, Robert Stillington (on the winning side) Crosby has enough influence to get Malory’s men and Tanner proscribed as traitors, due to Tanner and Malory’s support of Warwick the Kingmaker (loser at Barnett). He also sets out to steal the manuscript as the three head to Winchester.

The four learn they are being sought, and flee, Tanner and his fiancé to France and the Newgate Three to Flanders. While in Flanders, they go to Bruges. With Works’s background as a stationer, working with paper, they soon become involved with William Caxton, a publisher. Caxton is not intending to publish exclusively using scribes. He is importing cutting-edge German technology: a printing press with movable type. Yet even as they think themselves safe in Bruges, Crosby is still seeking Malory’s manuscript.

“Malory’s Quest” is a rollicking adventure. It is a fun read, taking its characters (and its readers) through late medieval Europe at the end of the War of the Roses. It follows the beginning of the printing industry, and the end of the age of chivalry. Readers will come away from it entertained.