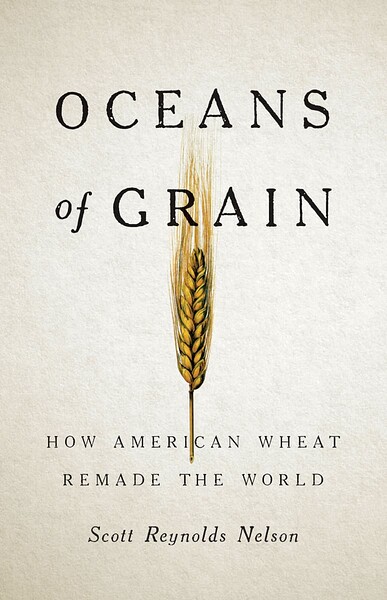 Oceans of Grain774×1200 77 KB
Looking for a good read? Here is a recommendation. I have an unusual approach to reviewing books. I review books I feel merit a review. Each review is an opportunity to recommend a book. If I do not think a book is worth reading, I find another book to review. You do not have to agree with everything every author has written (I do not), but the fiction I review is entertaining (and often thought-provoking) and the non-fiction contain ideas worth reading.

Wheat and its Role in Civilization

Do empires build trade routes or do trade routes build empires? Have the United States and Russia been locked in an economic rivalry since the 1860s? Was World War I triggered by international grain trade and the desire of Russia to control Constantinople?

“Oceans of Grain: How American Wheat Remade the World,” by Scott Reynolds Nelson, examines these questions and much more. It is a study of grain, its trade routes and the impact grain trading has had throughout history. Bread is the staff of life. Nelson follows it from prehistory to the present.

Nelson’s theme is simple: food production drives history. Abundance or absence creates or destroys empires, fuels economic and technological growth, and drives world history. Grain is the most important food. Storable and transportable it can be also be used to create more food, especially meat. The two biggest breadbaskets are the Ukrainian and US plains. There were others, but none as productive.

Nelson opens by showing how trading Ukrainian grain predated civilization, following oxcart trails across the Ukrainian steppes. Disease also followed these trails. Grain trading led to cities, which required food. Empires grew to ensure grain flowed. This led to bigger cities. These grew until reset by plague. The cycle then repeated itself. This pattern was followed from ancient Greece to Catherine the Great’s Russia. Russia grew rich exporting its grain to Western Europe starting in the eighteenth century.

Nelson also shows how the growth of the US affected this cycle. It produced a source of grain rivalling and surpassing the production of the Russian plains. America was more productive not just because of its soil, but because its free-market economy encouraged innovation and productivity. Following the Civil War the US powered past Russia. Despite the longer supply chain, its grain was cheaper.

“Oceans: of Grain” is provocative. Well-researched and readable, Nelson has written a book which will fascinate both professional historians and ordinary readers.

Mark Lardas, an engineer, freelance writer, historian, and model-maker, lives in League City, TX. His website is marklardas.com. This review appeared in a different form in American Essence magazine and Epoch Times .

Interesting, thanks. Expensive on Kindle (like more and more books).

Somewhere or other, I was told that the big grain trade in ancient times was the trans-Mediterranean trade, shipping grain from North Africa to feed the bread & circuses crowd in Rome. Makes sense, in that ships have always been more economical for transport than ox carts. There apparently also was trans-Mediterranean grain shipped from Egypt to Italy. Then pre-SUV “climate change” hit the grain yield, especially in North Africa. I wonder if the author touched on this in his book?

He touched on some of it. Although the focus is on the US and Ukraine (the book appeared prior to the 2022 Ukraine War, and I got my review copy in 2021), it tries to put that in a global perspective.

Great book!
I’m well into it, and grateful for a new perspective on history.
Big picture: S’interestin’ how we think of our species as predators, hunters—or at least, pastoralists—yet it’s really the goddess Ceres to whom we’ve been in thrall, planet-wide, lo these many years.
Kinda makes ya re-think the whole Cain and Abel motif……