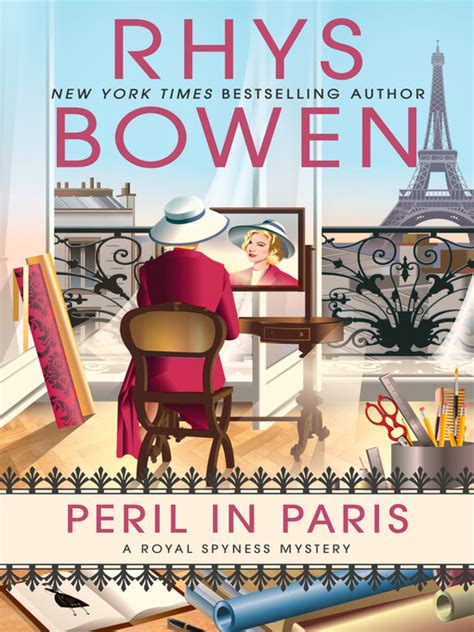 Another Fine Mess for Georgie

Lady Victoria Georgiana Charlotte Eugenie O’Mara (nee Rannoch) was born thirty-fourth in line for the British throne. A descendent of Queen Victoria, Georgie (as her friends call her) abandoned her place in the succession to marry the love of her life, Catholic Darcy O’Mara. Her family connection led Queen Mary to use Georgie for sensitive investigations. Her husband has shadowy connections with British intelligence. Both lead Georgie into a series of adventures in 1920s and 1930s Europe.

“Peril In Paris,” by Rhys Bowen, is the sixteenth novel in “The Royal Spyness” series, in which Georgie, a member of the impoverished Rannoch family, holds center stage. She is plucky, intrepid, and naïve. (Her most vehement epithet is “golly.”) She begins the novel pregnant with her first child and bored. Darcy proposes a trip to Paris, before travel becomes impossible.

Darcy has business in Paris. Darcy’s business in Paris is unknown, but is possibly dangerous. Belinda, Georgie’s schoolgirl chum, lives in Paris, working for Coco Chanel as courtier, designing dresses. Belinda has a standing invitation for Georgia to visit her. While Georgie accompanies Darcy to Paris and stays with him the first night, she spends the rest of the trip with Belinda, where it will be presumably safer.

It does not work out that way. A German trade delegation is in Paris with Georgie’s mother in it, complicating Georgie’s life. So is Wallis Simpson, intent on marrying Georgie’s cousin, now Edward VIII. Coco Chanel decides to design a maternity dress for Georgie. Chanel insists Georgie model the dress at Chanel’s fall fashion show. Then an obnoxious American socialite gets murdered at the show’s opening night – and the French police suspect Georgie.

The result is the combination of madcap comedy and serious investigation that characterizes all of these novels. German spies, American expatriates, and British intelligence all enter the mix. Georgie encounters old friends, former fiancés, and prior antagonists. These include aviatrix Princess Zamanska who offers to fly Georgie to England to escape the Sûreté (Georgie refuses, because Rannocks never run), and Wallis Simpson who wants to ingratiate herself with Georgie in pursuit of marrying Edward.

“Peril In Paris” is a delightful read for those familiar with the series and an equally delightful introduction to those who have never previously encountered Georgie’s adventures. It is a marvelous mix of between-wars European manners, political intrigue, adventure and comedy, fun to read and easy to enjoy.