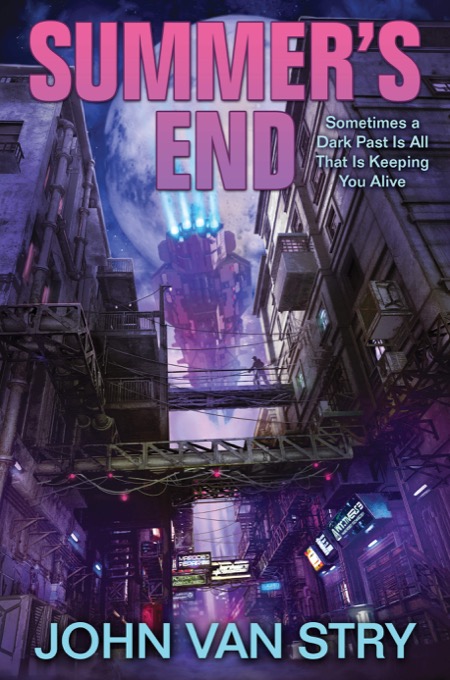 Dave Walker is a newly-minted spaceship engineering officer, aboard his first vessel: a clapped-out tramp freighter near the end of its useful life. While not much, it gets him off Earth, his life’s ambition. His other reason to make a pierhead jump to this ship? His stepfather is trying to kill him.

“Summer’s End,” a science-fiction novel by John Van Stry, is set in the near-future, several centuries from the present. Humans reside throughout the Solar System, but Earth still dominates, especially in terms of population.

There is one world government on Earth. Ostensibly a republic modeled on the United States, in actuality it is an oligarchy, run by the elies, the upper-class elite. Most of the world’s population are doles, supported by the government for the votes that keep the elies in power. Dave is prole, the fraction making up the middle class. The only ones on Earth that work, their labor keeps the planet running. They work whether they want to work and for what the government gives them. Or else. That is why Dave wants to leave Earth so badly.

Dave’s mother is an elie. After a brief marriage to his father she abandoned both husband and child to return to her elie family. She since remarried; her new husband Is running for office. Dave, was a gang member in his teens. Dave’s juvenile criminal record is a potential political embarrassment. Dave has to go.

If that were Dave’s only problem things would be good. Even in his early 20s Dave is a hard man. But he also has to learn his trade in a worn-out, undermanned vessel, deal with a new environment, and cope with criminals and space pirates. He also has to find a way to get his real family – father, stepmother, and younger half-brother and half-sister – off Earth. His half-brother is a genius; Earth has laws against geniuses leaving.

The result is a fast-paced adventure story. Van Stry has populated “Summer’s End” with a fascinating collection of characters and settings. The action takes place on the overcrowded Earth, habitations on asteroids and planetary moons and in deep space. Floating cities on Venus and extensive polities on Mars are hinted at.

“Summer’s End” is reminiscent of the best of Jerry Pournelle’s tales set in the Solar System prior to faster-than-light travel. Van Stry sucks readers into the action early and keeps them reading to last page.

Doles, proles, and elies. If only it were science fiction instead of contemporary sociology!

Sounds like another book that will have to be added to the growing “To Be Read” stack.

Yeah. This is one I am sorry I could not use on Epoch Times. (Mainly due to backlog and publication date.)

It may also be worth pointing out this was Mack Reynolds view of the future back in the 1950s. (If people remember who Mack Reynolds was,)