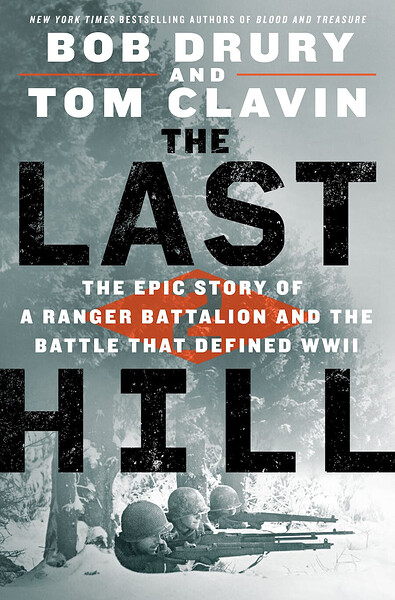 The Last Hill900×1368 244 KB
Looking for a good read? Here is a recommendation. I have an unusual approach to reviewing books. I review books I feel merit a review. Each review is an opportunity to recommend a book. If I do not think a book is worth reading, I find another book to review. You do not have to agree with everything every author has written (I do not), but the fiction I review is entertaining (and often thought-provoking) and the non-fiction contain ideas worth reading.

The Rangers after Point Du Hoc

Ronald Reagan made the Second Ranger Battalion famous with his 1984 “Boys of Point Du Hoc” speech. There he extolled the exploits of the Rangers who scaled those height on D-Day, June 6, 1944. Ever since then many believe the Rangers started and ended their World War II efforts on that day in June.

“The Last Hill: The Epic Story of a Ranger Battalion and the Battle That Defined WWII,” by Bob Drury and Tom Clavin shows that D-Day was the start of the Battalion’s World War II combat. They faced other challenges throughout 1944.

Their greatest came six months later, in December 1944, at the Hürtgen Forest. The 512 men of the battalion were to take and hold Castle Hill, 1320-f00t tall, flat-topped mound that once held a medieval castle. The key to the Hürtgen battlefield, several Wehrmacht regiments were defending the hill. Holding it was critical to Germany’s upcoming Ardennes offensive. The US 28th Infantry Division, thirty times larger than the Ranger unit tried and failed to take it.

Drury and Clavin show why US Army commanders assigned the Rangers the job and why the brass felt the Rangers could succeed based on the unit’s earlier performance. The book covers the Second Ranger Battalion’s history throughout the war.

The authors start by presenting the battalion’s organization and early training in the United States. They show how the arrival of James Rudder changed everything. Rudder, a Texas A&M graduate and football coach pre-war transformed the trainees from a collection of oddballs to a finely-honed combat unit. The book follows the Rangers through their arrival in Europe, showing their combat exploits between June and December 1944. They fought at D-Day and helped liberate the fortified French port of Brest before going to the Hürtgen.

The heart of the book is their struggle for Castle Hill. The Rangers arrived at the Hürtgen on November 14 and fought for a month. Of the 130 Rangers that occupied the hill, only 16 came down uninjured at the battle’s end. “The Last Hill” offers readers a gripping account of men in battle, one that will keep you reading until the end. Drury and Clavin provide a reminder of why the soldiers who fought World War II came from what was called the Greatest Generation.