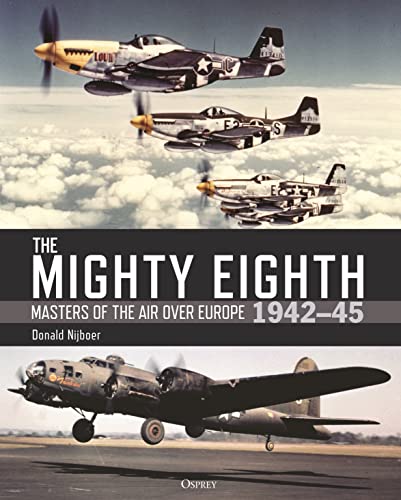 Activated in Georgia on January 28, 1942, the Eighth Air Force was stationed out of Britain through most of World War II. Although other Air Forces assisted, the Eighth was the chief instrument in the Army Air Force’s strategic bombing campaign against Nazi Germany.

It is broken into three broad categories. The opening two chapters reports the history of the Eight Air Force, with the first exploring the Eighth’s presence in Britain, and the second presenting its military history.

Three chapters cover the nuts and bolts of the Eighth, with one presenting its organization, a second its aircraft, and a third its weapons and tactics. This is the section that will most interest the hardware buffs and the armchair generals. It provides a detailed examination of organization, hardware, and tactics.

The final section has two chapters examining the human aspect of the air war. One chapter looks at the experience of battle. It explores what aircrew went through during their missions, and examines the stresses, fears, and hopes of these men. Another presents the notable personnel of the Eighth Air Force, providing biographies of its leaders, the aces, and prominent bomber crew.

In all, it provides a comprehensive history of the Eighth, one spanning both the human and technical aspects of the story. It is marvelously illustrated, with numerous black-and-white and color photographs and copious color illustrations, maps, and diagrams. If you know nothing about the Eighth Air Force or the air war over Germany, it is a good introduction to the topic. It provides all the information needed to finish with a clear understanding of what happened and why, without baffling a reader with technical jargon.

At the same time, it offers those knowledgeable about the topic an interesting exploration of a familiar subject. It is comprehensive, with enough material to provide a useful reference. The book borrows heavily from Osprey’s paperback monographs. Many of the illustrations appeared in their New Vanguard, Air Vanguard, and Warrior series. Regardless, unless you have all of these books, “The Mighty Eighth provides a one-stop source of information on the aircraft and their weapons and performance and more.