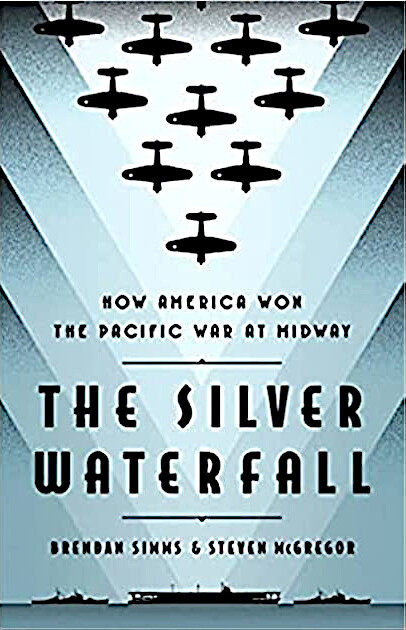 The Anatomy of a Victory

The Battle of Midway, fought in the Northern Pacific during World War II changed everything. Four Japanese fleet aircraft carriers were sunk. Japan’s advance stopped and its retreat began. Fought only 80 years ago one of the most written-about battles in history.

“The Silver Waterfall: How America Won the War in the Pacific at Midway,” by Brendon Simms and Stephen McGregor shows more remains to be said. They offer a fresh look and a fresh interpretation of the events of the battle.

They contend the outcome when beyond a lucky accident. Simms and McGregor argue the “luck” achieved by the US Navy was the luck Thomas Edison meant when he said “I believe in luck. The harder I work the luckier I get.” It was the , product of hard work. The United States Navy had the right tool (the Douglass Dauntless dive bomber) manned by professional and highly skilled pilots. They show how aircraft and aircrews were in the right spot due to superb strategic level management.

They present this thesis in the book’s opening chapters. There they examine the design development and production of the Dauntless, the commander of the Pacific Fleet, and training and preparation of the pilots who flew the Dauntless.

The authors personalize the story by focusing on key individuals. The story of the Dauntless is framed around Ed Heinemann, its designer, a self-taught engineer who never attended college. The life of Chester Nimitz, who guided the action at Midway is examined, showing what made him a uniquely good fit as Pacific Fleet commander. The dive bomber pilots are represented by Norman “Dusty” Kleiss, aboard carrier Enterprise.

Most of the rest of the book is spent describing the battle. The authors trace the events leading up to the battle and follow the action as the battle unfolded. They provide a detailed account of the attacks by both sides and the results. While the chief focus is on the dive bombers, the entire battle is described.

The Japanese are not neglected. A wide array of Japanese sources and memoirs ar threaded into the story. Their thinking and actions are explored as thoroughly as the Americans’.

The book closes with a chapter analyzing the battle – and the historical interpretations of it in the years that followed. “The Silver Waterfall” is a useful and fascinating assessment of Midway. Simms and McGregor have produced a valuable addition to the Midway canon.