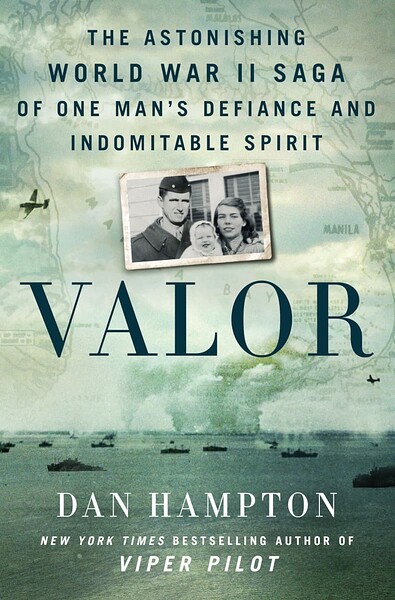 Valor789×1200 113 KB
Looking for a good read? Here is a recommendation. I have an unusual approach to reviewing books. I review books I feel merit a review. Each review is an opportunity to recommend a book. If I do not think a book is worth reading, I find another book to review. You do not have to agree with everything every author has written (I do not), but the fiction I review is entertaining (and often thought-provoking) and the non-fiction contain ideas worth reading.

Defiance in the Philippines

Lt. William Frederick “Bill” Harris was an officer with the China Marine, the elite 4th Marine Regiment stationed in Shanghai, China, prior to World War II to protect American citizens. In the summer of 1941, with war clouds gathering, Harris and the 4th Marine were withdrawn from China to the presumably safer Philippines.

“Valor: The Astonishing World War II Saga of One Man’s Defiance and Indomitable Spirit,” by Dan Hampton, shows how illusory that presumption was. Japan invaded the Philippines in December 1941. The 4th Marine ended up defending the American Philippines, first in Bataan and later as part of the garrison at Corregidor, the island fortress guarding passage into Manila Bay.

Harris led a platoon during the siege, commanding a company after Japan landed on Corregidor in May 1942. The overwhelmed and outnumbered Americans were forced to surrender. Although Harris was taken prisoner, he refused to quit. With two fellow officer friends he escaped, swimming eight hours in the shark-infested channel between Corregidor and Bataan to reach freedom.

Hampton traces Harris’s activities through the rest of the war. He shows how Harris eluded capture in Bataan, joined forces with Filipino guerrillas, and fought the Japanese in the Southern Philippines. The whole time he was part of the guerrilla army, Harris had another objective: to escape to Australia and rejoin the war in a regular Marine unit. Hampton describes that voyage, ending with Harris’s capture by the Japanese at Morotai Island. He spent the rest of the war in a prisoner-of-war camp in Japan. When finally liberated, he represented the Marine Corps POWs at the Tokyo Bay surrender ceremony.

“Valor” follows Bill Harris through his ordeals. It also follows his family at home. His father was a decorated Marine general, himself fighting in the Pacific. Neither he nor Harris’s mother learned what happened to their son until the war ended, despite his father’s best efforts. He was simply “missing.”

Harris would go on to command a Marine battalion during the Korean War. Fighting the Chinese at Chosin Reservoir, he went on to acts of further valor.

Hampton tells an incredible story. He used military records, and an unpublished memoir Bill Harris wrote after World War II, to provide an intimate picture of an American officer who, although captured, never surrendered. The resulting story is an inspiring tale of triumph over adversity. The book often reads like an adventure novel. Yet it is a true story of endurance and courage by an American hero.