Tiananmen … and a Whole Lot More

The world is changing, and China is clearly going to play a much larger role in the future than it did in the 20th Century. Accordingly, I have been trying to learn some more about that country and its history, which brought me to this book:

I should have read that title more carefully – we get to page 138 before the tale arrives at Tiananmen Square, although to be fair that event is the undercurrent running through her whole narrative. The book really is the autobiography of an intelligent but troubled Chinese woman born in 1966 at the start of the Cultural Revolution who lived through “interesting times”. Each one of us sees the world through a keyhole. Ms. Wang shares the view from her keyhole from her earliest recollections to her later life in California, with many interesting observations along the way about life for Chinese people. And she tells a peculiarly compelling story.

She tells of her young life, sent by her parents to share a room with her grandmother in a tiny apartment in Beijing, sharing a kitchen and toilet with all the other residents on that floor of the building. It is a measure of the rate of change in China that by 2003 she and her entrepreneur husband lived in a single-family home in a 500-acre gated community in the northern suburbs of the city.

In 1984, teenage Ms. Wang won admission to the prestigious Peking University. When she graduated in 1988, she was one of the first people to get a job working for a foreign company in China, in an office only steps away from Tiananmen Square. In 1989 amidst the rising tensions in Beijing following the funeral of Hu Yaobang (disgraced former General Secretary of the Chinese Communist Party), she had her first sexual encounter … with a reporter who later turned out to be married. Yes, her tale is that melodramatic!

The 1989 Tiananmen incident enveloped the whole city, not just the students in the Square. While superficially the issue was about democracy, the author suspects the underlying driver was students’ fears about inflation and employment prospects. When the students got no response to their demands, they launched a hunger strike, which really touched a nerve with city residents:

“In hindsight, I think a hunger strike struck a chord with people because memories of mass starvation during the Cultural Revolution were still fresh in our minds. Eating was deemed the most core of all human rights.”

When the hunger strikers began to keel over, disruptions spread throughout Beijing. The army was sent in, but found the intersections barred by protestors. Ms. Wang & her grandmother lived 3 miles from the Square – and heard the soldiers shooting the protestors block by block as they made their way to the Square. A neighbor who was in the wrong place at the wrong time was shot outside the apartment block, with the body left lying there for hours.

After the army had cleared the Square, Ms. Wang noticed how quickly people’s attitudes changed:
“Our generation would never again raise our voices in protest. Not in twenty years, not in thirty years, not in our lifetimes”.

The same Deng Xiaoping who ordered the army into Tiananmen Square also opened China to international commerce, and economic development started to accelerate. To ameliorate foreign criticism post-Tiananmen and to maintain Most Favored Nation trading status, China’s rulers decided to liberalize freedom of emigration. By 1997, Ms Wang was ready to take advantage of this change and went to Oregon to study.

In the more open Chinese business climate of the 1990s, a friend had opened his own restaurant and then expanded it into a franchise chain. Now wealthy, he pursued her to Oregon and persuaded her to marry him and return to Beijing in 1999.

Marrying well is a good path in any society. In 2004 she became pregnant with her second child, which at that time of the One Child Policy carried the risk of unpredictably huge fines. Rather than an abortion, she bought residency in New Zealand and gave birth to her son there. Restless, she moved back to China, and then to Canada, and finally to California. In 2017, she met up with two of her old friends from Peking University in Stanford, and had an epiphany about China:

“Why hasn’t democracy happened in China despite its thriving economy? … It had something to do with people leaving the country. … We hadn’t formed pressure groups, nor fought for freedom and democracy. After Tiananmen Massacre, no one has the guts to protest any more.”

Hers is a long & winding tale in which she shares her fears, her disappointments, and her occasional triumphs. In the Acknowledgements, the author thanks a friend who had persuaded her to edit out half of her original manuscript. This reader almost regrets that she shortened the book. Well, almost!

All of which only increases one’s wonder at the courage and persistence of the Founders, faced with similar intimidation by the then most powerful nation on earth.

Somewhere in all this one has to come face-to-face with what it takes, in terms of personal risk, to stand up for freedom. Seems everywhere the youth is less inclined to risk any personal prosperity for liberty. Such a shame. To quote the old country song, “If you can’t stand for something, you’ll fall for anything.”

My question is, if China has a “thriving economy” AND people are free to leave and take advantage of even thriving-er economies elsewhere, why WOULD anybody get involved in “protests” that could get ‘em shot?
Especially with the example of what American Lefties like to call “our democracy” before them?
What we’ve got now is an effing oligarchy which immediately demonizes anyone who disagrees with it.

Yuh and imprisons ‘em too— just ask the January 6 defendants.
(I confess I hold out a trembling, trepidatious hope for November 2022. But if that fails us….)

Especially with the example of what American Lefties like to call “our democracy” before them?
What we’ve got now is an effing oligarchy which immediately demonizes anyone who disagrees with it. 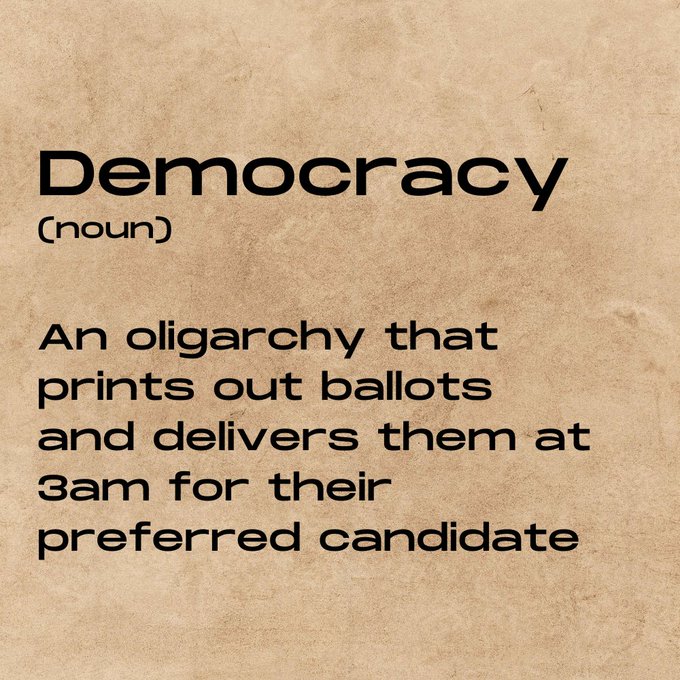