In the early morning of 2022-05-16 (01:31 to 06:51 UTC), starting in the evening of May 15th in Western Hemisphere time zones, a total lunar eclipse will occur. The following graphic from Fred Espenak (view original [PDF]) shows details of the eclipse and the circumstances of its visibility around the globe. 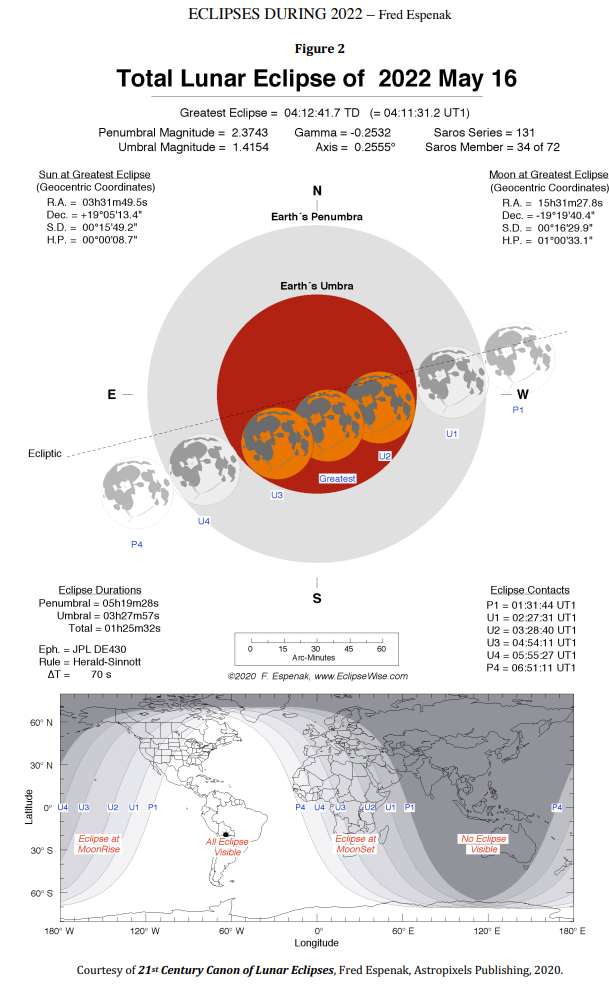 This eclipse is not central, so the Moon can be expected to be on the brighter side for a total eclipse, with the southeast limb noticeably brighter than the northwest.

The eclipse occurs when the Moon is within a day and half of perigee, so the Moon will appear larger than average. This has motivated the idiots compelled to name such things to call the event the “Fiery Super Flower Blood Moon”.

Here is a one minute time lapse video of the lunar eclipse of 2022-05-16 taken from Griffith Observatory in Los Angeles, showing onset of totality, all of totality, and the post-totality partial umbral phase. Note the stars near the limb of the Moon during totality, one of which emerges from occultation at 00:20. At the end of the eclipse, you can see the northeast limb of the Moon subtly brighten as it moves outward in the penumbra. This is almost impossible to perceive with the human eye in real time. See my “Penumbral Lunar Eclipse Imaged” from August, 2009 for details.

Of course, they had to call it a “Super Flower Blood Moon eclipse”—Californians, don’t you know?

During totality, I noticed 2 small bright objects emerge from behind the moon. I’m trying to figure out if these were planets or stars. I would guess the latter, since I imagine that any planet (in the ecliptic plane) would move parallel to the moon’s path, rather than at an angle, as these do. Have I got that right? I can’t quite account for the effect of the Earth’s rotation and inclination as I think about this. I also guess the camera was tracking the moon in a manner which compensates for both the moon’s orbit around the Earth and Earth’s rotation/inclination. Not sure about any of this speculation.

During totality, I noticed 2 small bright objects emerge from behind the moon. I’m trying to figure out if these were planets or stars.

They would have to be stars, as the visible planets during the eclipse were distant from the Moon in the sky during the eclipse. The Moon’s orbit is inclined around 5° to the ecliptic, so planetary occultations by the Moon are infrequent and occur in “seasons”. There are only 9 planetary occultations in 2022 and 7 of them are of faint Uranus. The first this year will not occur until 2022-05-27 when the Moon will occult Venus for observers in southeast Asia and Indonesia.