On 2021-12-04 a total eclipse of the Sun was visible from Antarctica and the Southern Ocean. As is the case for all eclipses near the poles, duration was short, with maximum totality 1 minute 54.4 seconds. Duration was further shortened by the eclipse’s occurring one month from Earth’s perihelion, which made the apparent size of the Sun larger. The Moon, however, was just a few hours from perigee, which increased the length of totality. I have cued the video to start shortly before totality; scroll back to observe the partial phase. There is a fine display of Baily’s beads at the start and end of totality and a large prominence visible at the one o’clock position during totality.

Here are details of the eclipse from Fred Espenak and NASA.

Whar are the odds of this happening elsewhere? Is it even meaningful to calculate the likelihood of congruent diameters and distances of eclipsing bodies to coincide so perfectly to produce a total eclipse?

What are the odds of this happening elsewhere?

The near-equality of the apparent sizes of the Moon and Sun are a phenomenon of the present epoch and not the case in the distant past and future. As I described in “Moon near Perigee, Earth near Aphelion”, the Moon formed much closer to the Earth and has been receding over time due to tidal friction. In the past, the Moon was substantially larger in the sky than the Sun and eclipses were more common but, for the most part, just as spectacular. The Moon is currently receding from the Earth at around 3.8 centimetres per year, or four metres per century. This means that some time in the future, there will be no more total eclipses. If the rate of recession stays constant (which is not the way to bet as it depends upon the configuration of continents that changes due to continental drift, and falls dramatically during ice ages when ocean tides are less of an influence), some time around 1.4 billion years in the future the last total solar eclipse will occur on the Earth.

Still, the coincidence is striking, and people have speculated on why we find ourselves on a planet where it occurs. The most plausible anthropic explanation I’ve heard is that planets with large moons are stabilised in variations in axial inclination which would otherwise cause extreme seasonal variations in weather that inhibit the evolution of complex and intelligent life. But a moon too close raises extreme tides that also inhibit evolution. Perhaps the Moon/Sun coincidence is the “sweet spot” needed to develop a technological species able to wonder about such things (barely) before the Sun dies. This is possible, but seems a stretch to me.

When a solar eclipse occurs near one of the poles, the lunar shadow cone enters the Earth’s atmosphere at a shallow angle and produces an elongated shadow on the Earth’s surface. This allows seeing the Moon’s shadow in ways that are difficult to visualise when the Sun is high in the sky. This is a photo of totality from an airplane flying through the shadow; the shadow cone is visible with sunlight from non-eclipsed regions surrounding it. 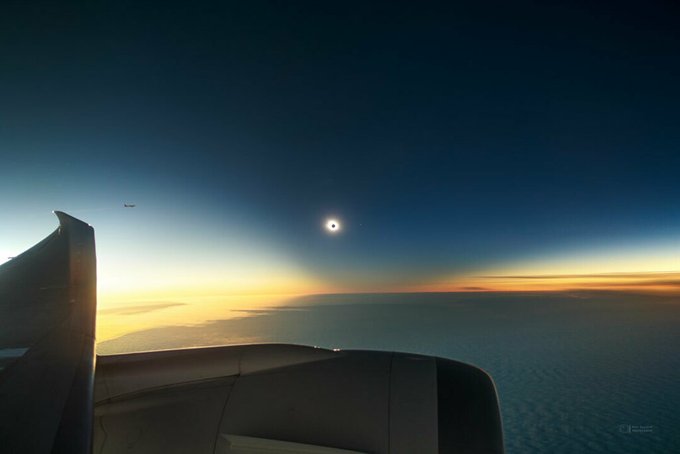 Here is a photo from the International Space Station showing the elongated shadow of the Moon on the Earth. The recently-arrived Russian Prichal module and its Progress delivery ferry is visible at the bottom right. 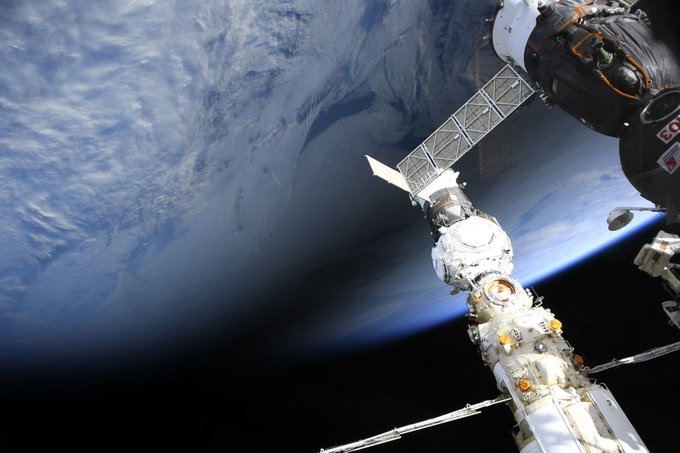