The National of Abu Dhabi reports “How the UAE plans to become a leading space power in the region”.

The global rise of the private space sector has helped show how governments cannot go it all alone when reaching for the stars and it is no different for the UAE.

Over the next decade, the Emirates plans to invest more than Dh3 billion ($816 million) in the private space sector to grow the country’s capabilities in space.

Economic zones dedicated to space activities will be set up across Abu Dhabi, Dubai and Sharjah to allow start-ups and established businesses to set up operations.

Officials hope this would help the country become a major space power in the region, with a well-developed ecosystem consisting of public and privately led projects — similar to how Nasa has harnessed the power of the thriving privately owned space companies in the US. 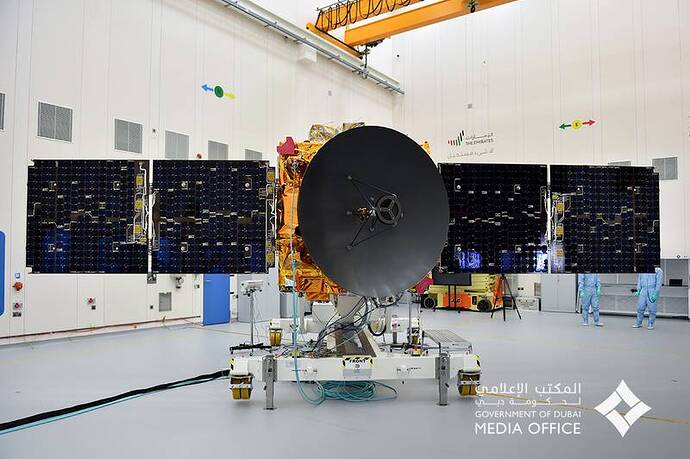 The UAE’s next big space mission, a spacecraft that would explore seven asteroids and perform a Venus fly-by, will be built mostly by the private sector.

It will be a defining moment for the country’s ambitions of a well-established private sector, as well as pave the way for future and more complex missions.

It is also hoped that more local companies that do not cater to the space sector would start getting involved as they did with the Mars mission.

The Mohammed bin Rashid Space Centre, an organisation in Dubai that has executed the UAE’s leading space missions, is working with companies on its upcoming Earth-imaging satellite MBZ-Sat.

It is a little-known fact that the UAE leveraged its massive orders for commercial aircraft into building parts for Airbus & Boeing planes. Reportedly, the UAE also builds smart bombs. In the longer term, the West will no longer have a technological advantage over the rest of the world – see, for example, where high-end computer chips are made these days. What could be the ramifications?

One guess is that – when the whole world has access to the same technological capabilities – the deciding factor between winners & losers will be the quality of government. “Our guys” ought to be getting rather concerned. So should we citizens – not that we have much voice in our “democracies”.

Not a great place to launch from given the proximity to Iran. They could invest in SpaceX’s sea launch project and launch from the Indian Ocean.

So should we citizens – not that we have much voice in our “democracies”.

Whatever “democracy” means when Viktor Orbán’s party wins a 2/3 majority in Hungary’s parliament and pearl clutchers all over the EU call it a “threat to democracy”.

@Schilling1776
How dramatic. They love democracy until the people vote a different way, then the democracy is fascism. Orban combined a Hungary first/Family first agenda that was incredibly popular. His political party now controls 2/3 of the legislature. https://t.co/MyDLMWUSh0 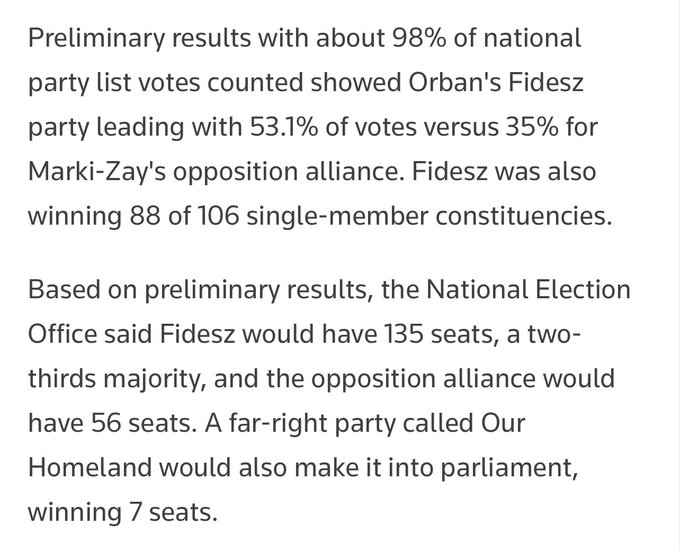 Not a great place to launch from given the proximity to Iran.

A reliable, fully-reusable launcher can change the assumptions about possible launch sites. Once you’re not dropping pieces along the trajectory and you’re confident the probability of crashes is no greater than in the vicinity of a commercial airport, there’s no constraint to launching over land as long as noise and violation of claimed airspace is not a problem. Still, you can have a robust space industry and program without the need to launch from your own territory. Most of the money in the space industry today is in building and operating satellites, not launch.

Given the advantages of an equatorial launch site and all-azimuth launch capability, an offshore platform in the Indian Ocean makes a lot of sense.

One guess is that – when the whole world has access to the same technological capabilities – the deciding factor between winners & losers will be the quality of government.

It’s hard to compare quality of government between so-called liberal democracy and hereditary absolute monarchy which is the rule in the Emirates, but you get the sense that the people in charge there are, for the most part, acutely aware that the oil is going to run out in the foreseeable future and that if they don’t have something to replace it, including financial capital, human capital, infrastructure, and connections to the world trading economy, the gravy train will come to an abrupt halt.

This is in rather striking contrast to the solons in Washington who seem to assume they can go on borrowing and printing money forever and that the rest of the world will continue to deliver container ships filled with real goods in return for electronic IOUs they no longer even bother to print.

The key metric is surely the quality of life for the citizenry at large. Both the late Sultan Qaboos in Oman and the late Sheik Zayed in the UAE did very well by that standard. Both of them did a lot to improve life (materially and socially) for their populations. We could probably make the same comment about the (very) late George Washington. The question is always – What follows after a great leader?

In theory, democracies should deal with the issue of succession much better than the random genetics of a monarchy. But when we look at the quality of the leaders of Western democracies today, the gap between theory and reality becomes a gaping chasm. It is not clear whether democracy has sufficient self-healing properties to stop the slide into incompetence (at best) and corruption (too often).