United Launch Alliance (ULA) plan to launch an Atlas V in the 401 configuration to place the Joint Polar Satellite System-2 (JPSS-2) spacecraft in an 824 km Sun-synchronous orbit for the U.S. National Oceanic and Atmospheric Administration. Launch is scheduled for 09:25 UTC on 2022-11-10 from Space Launch Complex 3 at Vandenberg Space Force Base in California.

The primary payload, JPSS-2, is a multi-sensor environmental satellite which will carry microwave, infrared, and infrared instruments as well as an ozone mapping payload to monitor real-time conditions on land and above the oceans. The secondary payload is NASA’s Low-Earth Orbit Flight Test of an Inflatable Decelerator [PDF] (LOFTID). This is an inflatable heat shield and aerodynamic decelerator which will be attached to the top of the Atlas V’s Centaur upper stage. 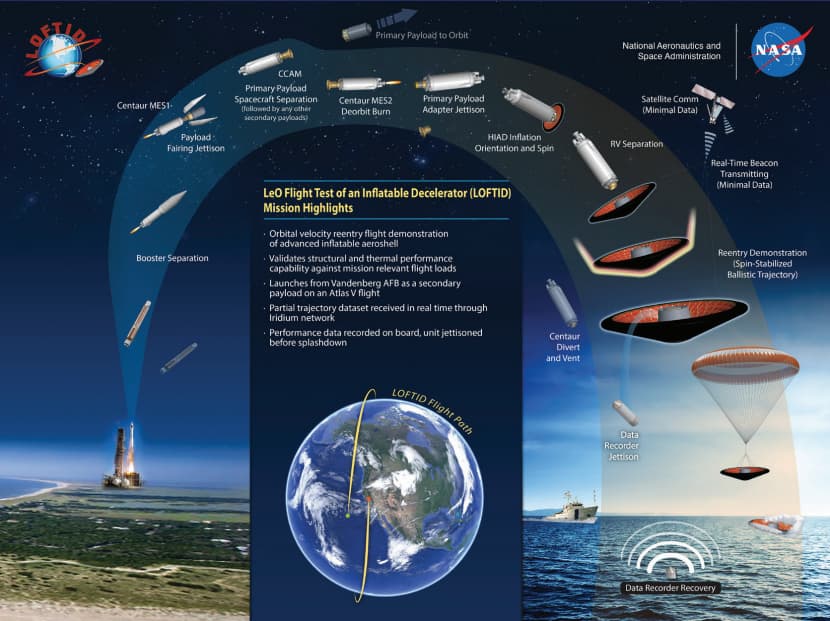 After the Centaur performs its de-orbit burn, LOFTID will inflate to its 6 metre diameter, spin up for stabilisation, and re-enter the atmosphere and, if successful, decelerate from orbital velocity to less than 272 metres/second before deploying a parachute and splashing down in the Pacific Ocean to be recovered and inspected. This is the largest blunt body aeroshell to attempt atmospheric re-entry.

LOFTID is intended to test the feasibility of inflatable heat shields and decelerators for landing heavy payloads on the Earth and Mars.

The mission was a complete success, delivering the JPSS-2 satellite to its intended orbit, then performing a de-orbit burn, inflating LOFTID, and releasing it on a steep re-entry trajectory to hit the upper atmosphere at a velocity of Mach 29 (faster than the usual low Earth orbit re-entry at Mach 25). Here is LOFTID, just after release from the Centaur upper stage. 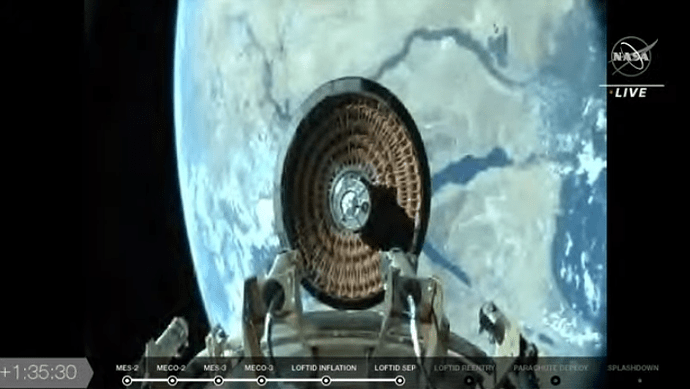 The inflatable heat shield survived re-entry and decelerated until its parachute deployed, splashing down in the Pacific Ocean. Here is a view of LOFTID floating in the ocean taken from the ULA recovery ship as it approached to spacecraft to recover it. 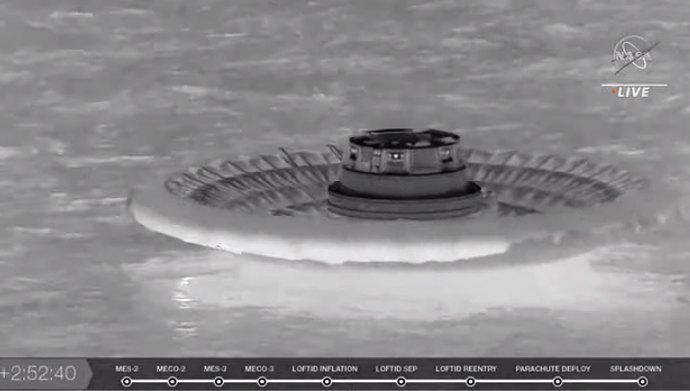 ULA plans to use a decelerator like this to recover the engines from the first stage of their Vulcan rocket.

Here is a NASA Media Briefing held on 2022-11-17 on early results from the LOFTID demonstration. This is an audio-only recording.